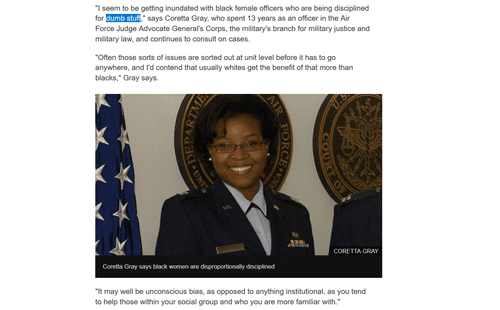 It starts with black female Air Force veteran Janice Jamison talking about how her black women’s veteran’s organization hosted failed Georgia gubernatorial candidate Stacey Abrams, and she had an argument with

Jamison, who works for the organisation whose members are predominantly African American, tried to reason with the men but found herself being harangued by one man on the subject of veterans' needs.

"I said to him, 'Well, sir, for you to tell me what I need as a veteran, have you ever been in uniform?"

The man—who she later discovered to be a white nationalist—admitted he had not, and appeared visibly embarrassed, she tells the BBC.

The BBC’s Jeffrey [Email him | Tweet him] goes on to a lot of “black history” stuff about that small minority of America’s soldiery who have been black and says that America isn’t doing right by its black soldiers:

Protect Our Defenders, an advocacy group, released a 2017 report highlighting how black service members were treated more harshly by the military's judicial system.

Black soldiers were 61% more likely than white soldiers to face court martial, the military judicial proceeding for more serious offenses. That percentage was 40% for black sailors and 32% for black Marines.

Black airmen were 71% more likely than whites in the Air Force to face court martial or non-judicial punishment, discipline meted out for less serious offenses.

"I seem to be getting inundated with black female officers who are being disciplined for dumb stuff," says Coretta Gray, who spent 13 years as an officer in the Air Force Judge Advocate General's Corps, the military's branch for military justice and military law, and continues to consult on cases.

"Often those sorts of issues are sorted out at unit level before it has to go anywhere, and I'd contend that usually whites get the benefit of that more than blacks," Gray says. 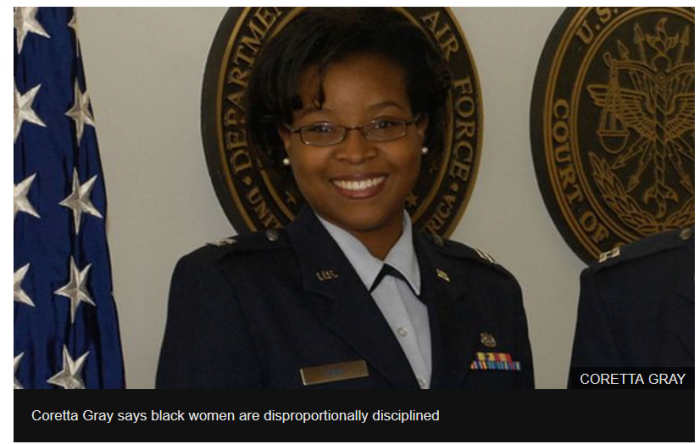 "It may well be unconscious bias, as opposed to anything institutional, as you tend to help those within your social group and who you are more familiar with."

But she also suspects that the current mood in America has something to do with why she is seeing an increase in these types of disciplinary cases.

"People are feeling more emboldened to act out their biases," Gray says. "It's an inflection moment - there's this atmosphere emboldening people to show who's in charge and how they are going to handle things."

I need to remind everyone—it may just be transatlantic ignorance on the BBC’s part—that all of this is inappropriate on Memorial Day.

It’s Veterans Day, November 11, that is set up to commemorate surviving veterans, and to remind Americans of the debt they owe to those guys. Memorial Day is in honor of those who never made it back.

As for the idea that America is not doing right by its black soldiery, you need to know that the Army has had massive Affirmative Action programs for years, culminating in the appointment of Colin Powell as the first Affirmative Action Chairman Of The Joint Chiefs Of Staff.

The disproportionate discipline problems mentioned in this Protect Our Defenders report [PDF] are actually lower than the figures for civilian crime. As Steve Sailer pointed out years ago in Race Relations: The Myth Of The Military Model,  the Armed Forces of the United States have fewer problems with race relations than the rest of society because people with low IQs are simply not allowed in the military. I expanded on this in The Fulford File | Education Theorist Ted Sizer And The Myth Of The “Military Model”.

That doesn’t solve all the IQ gap problems, however. As artillery officer “Duncan Hengest” wrote in Diversity in the Army [American Renaissance, January 2008]:

Probably the greatest problem with blacks in the Army today is lack of ability, despite armed services qualification tests that wash out a considerably greater proportion of black applicants than white.

And of course, that’s black male soldiers, who might actually be some use in combat. I don’t know what Air Force veteran Janice Jamison was doing in Air Force, but I doubt if it added much to America’s fighting power.

Coretta Gray, above, as a member of the Judge Advocate General's Corps is actually subtracting from the Air Force’s fighting power, as military lawyers always do. [How Anti-Soldier Lawyers Banned a Kind of Ambush, by Kevin O’Brien, August 25, 2016]To the extent that the JAG is doing something useful, and keeping order in the service, punishing miscreants and so on, Ms. Gray seems to have been unwilling to do her job when the miscreants were disproportionately black.

What Ms. Gray and the BBC’s Jeffrey don’t seem to grasp is that the Armed Forces are not supposed to be about black female empowerment.

Another group that fails to grasp this: the US Army’s commanders.

When it was announced recently that “West Point is about to graduate its largest class of black women”[CNN, May 15, 2019] Steve Sailer blogged about it under the heading Look on Our Women of Color Army Officers, ye Mighty, and Despair!, saying

Oh, wow, not just record numbers of black women, but also of Hispanic women too.

The Russians, Chinese, and Iranians must be quaking in their boots.

Well, no. As the Duke Of Wellington is alleged to have said about some troops sent to him “I don't know what effect these men will have on the enemy, but by God, they terrify me.” 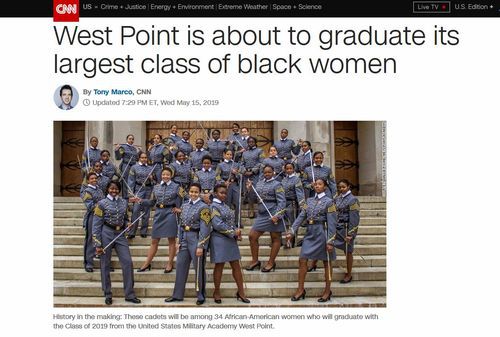 I assume (it’s a four-year course) that some of the women in this photograph (above) were also in the photograph below, which caused some scandal two years ago, since it involved cadets in uniform making a political statement with fists raised in support of Black Lives Matter, then engaging in nationwide “demonstration”, aka riots. [Racism Within West Point, InTheArenaFitness.com, May 5, 2016] 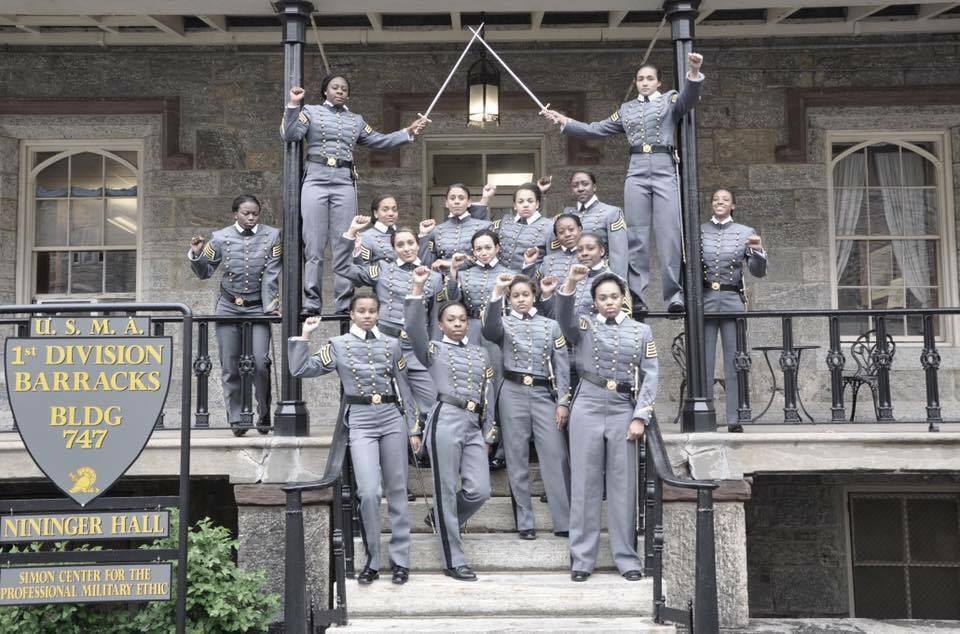 A photograph buzzing around the internet this week shows sixteen black and mulatto female West Point cadets, in uniform, posing with their fists raised in an apparent tribute to the Black Lives Matter Soros-funded anarchist group.

Where there should be comradeship and institutional loyalty, these troublemakers have introduced rancor, division, and victimological whining. That's not to mention being in clear violation of Department of Defense directives and every traditional conception of military dignity and honor.

In a country that had not lost its collective mind on the subject of race fifty years ago, these malefactors would be shamed before their comrades, then sent to the brig for five years each, then dishonorably discharged. In the country we actually live in, where blacks are the pampered pets of a fawning elite class, they will probably be decorated for valor.

They're NOT Hanging Daneesha Deever In The Morning (And Other Aspects Of Negro Fatigue), by May 7, 2016

And of course these ladies weren’t punished.   West Point weaseled out by saying that “that based upon available evidence none of the participants, through their actions, intended to show support for a political movement". [West Point Photo Inquiry Clears Cadets, May 10, 2016]

Finally, in 2013, I did a blog post called Single Moms In The Army, based on the case of single mother Alexis Hutchinson, below with her son, who was an Army cook, supposed to be available for deployment overseas:

On Thursday, the military decided not to court-martial a single mother who skipped deployment to Afghanistan to avoid placing her child in foster care. Alexis Hutchinson, formerly an Army cook, received an other-than-honorable discharge. Her rank has been reduced to private and she will most likely lose her benefits.

The 21-year-old Oakland native arranged to leave her 10-month-old son with her mother when she learned she was deploying to Afghanistan. After caring for the boy, Hutchinson's mother decided the arrangement was not sustainable. Hutchinson claims she could not find an alternative caregiver and that the military told her she should put her son in foster care. Army officials, however, claim she had no intention of deploying in the first place. 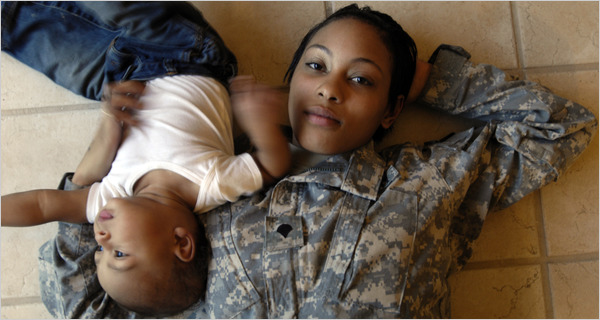 "Skipped deployment" is one way of putting it—the New York Times called it "what might seem natural to a parent but to the Army was a serious offense". [Single Mother Is Spared Court-Martial,  by James Dao, February 11, 2010] Readers with military experience will remember it as "AWOL, Missing Movement "—she didn't get on the plane, so her unit flew to Afghanistan without her.

For an actual soldier, this is a very serious offence. It's true that Hutchinson’s unit was probably better off without her, but that was not her decision to make.

On Memorial Day, it’s time to remember that the beaches of Normandy and Iwo Jima were not stormed by resentful black females in uniform, but by the same white males who continue to make up the majority of America’s actual fighters—and, despite the multicultural modern Army, the majority of deaths in modern combat.