Memo To Trump: When You Have Time, Deport Moaning Marxist Ariel Dorfman!

Benjamin Villaroel
A+
|
a-

Earlier by Benjamin Villaroel: One Year After, A “White Hispanic” Broods On The Curious Transformation Of George Zimmerman

“Now, every desperate American must gaze in the mirror and interrogate the puzzled face and puzzling fate that stares back: What did I do or not do that made the cataclysm possible?”

So wrote Professor Ariel Dorfman [Email him], a Chilean-American immigrant of Russian Jewish extraction, recently. The “cataclysm” to which he was referring: the election of President Donald Trump [America still hasn't reckoned with the election of a reckless con man as president, by Ariel Dorfman, Los Angeles Times, December 17, 2017]

Despite his pose as a downtrodden immigrant intellectual, Dorfman, whose political views akin to those of Naomi Klein and Howard Zinn, has managed to publish regularly in many of America’s most prestigious outlets: The New York Times, The Los Angeles Times, and Time, for example. His academic writings are also experiencing a revival, with glowing reviews in Marxian outlets like The Los Angeles Review of Books and Jacobin Magazine.

From 1971-1973 Dorfman worked as a “cultural advisor” to Chile’s Leftist government, which was eventually overthrown by a military coup that received some assistance from the US. He then fled Chile and lived for decades in exile.

Eventually, Dorman settled in the U.S. and, in the mysterious way these things happen, became a tenured professor at top school, Duke University, and a stereotypical Leftist academic. Because of his personal experience, he purports to be an expert on “undemocratic” impulses in healthy democracies. American liberals eat this up because they thrive off of guilt. Having a foreigner (especially a sort-of-Hispanic) condemn their native country legitimizes their worldview. Having it done by a professor who regularly insinuates that President Trump is analogous to a much-demonized free-market loving, right-wing military dictator makes it all the better.

As long as you don’t know anything about the Cold War history of Chile.

But I do—and I want to shed light on the misrepresentations Dorfman has been spitting out to delegitimize Trump while aggrandizing himself.

To begin, we need to cast a discerning eye on the word “democratic.”

Dorfman, among many others, makes much of the fact that the socialist who took the presidency in 1971, Salvador Allende, was “democratically elected” in 1970. Technically, this is true. In a tight three-way race, Allende received the biggest third—36.61 percent of the vote. That is to say, 63 percent of the voting population opposed him.

In 1988, there was a plebiscite in Chile over whether the military strongman who overthrew Allende, General Augusto Pinochet, should stay in power until 1997. This vote was free and fair, and Pinochet lost. He stepped down. However, remarkably, 44 percent of voters supported his staying in power. So, even after 15 years of a heavy-handed dictatorship, Pinochet was still supported by a greater percentage of voters than Allende ever was.

Indeed Allende was so unpopular by 1973 that the majority of the country supported the coup that overthrew him. [Gallup Probe Indicates Chileans Favor Regime, by William F. Buckley, April 21, 1975] Even the center-left supported the coup!

And yet, it is the Trump presidency that Dorfman is alluding to in his February 11, 2018, op-ed for The New York Times: How We Overcame Tyranny Before. Ludicrously, he claims that Chile’s fight for independence from Spain and the struggle to end Pinochet’s dictatorship show us that where there’s a will, there’s a way. He emotes:

Not since the iniquity of Hitler and Mussolini have we witnessed such a resurgence of hatred against the Other, even as the United States—one of the countries that led the fight against fascism—is now governed by men who would turn back the clock, and use repression rather than persuasion to obliterate so many gains and glories we took for granted.

Significantly, despite Dorfman’s alleged interests in both Latin America and human freedom, he never seems to write about the disastrous situations in Cuba, Venezuela, or any other country put through the wringer by Communism. His martyred hero Allende did not mind Leftist tyrants either. He hosted Fidel Castro for a three-week state visit in 1971. Castro gifted Allende an assault rifle with the inscription: “To Salvador Allende, from your comrade in arms, Fidel Castro.” The two of them went to the range together to practice shooting, camera crews tagged along and the footage was put on the nightly news. You can still find it here.

The next year, Allende enacted strict gun control legislation in Chile, followed by military raids on private property in search of weapons.

During his 17 years as head of state, Pinochet did execute around 5,000 dissidents. But, while estimates for executions in Castro’s Cuba vary widely, one expert in state-sponsored mass killings, R.J. Rummel, noted the median of the estimates was around 73,000 for the period between 1959 and 1987. Given that Castro ruled until 2008, how many tens of thousands more were killed?

And these numbers don’t even include the people who have died fleeing Cuba on rafts, which is estimated in the tens of thousands. [Red ink: The high human cost of the Cuban revolution , By Glenn Garvin, MiamiHerald.com, December 1, 2016]

Allende was also on good terms with the Soviet Union. He sent economic delegations to the USSR and even visited himself in 1972 to meet with Leonid Brezhnev. The USSR pumped hundreds of millions of dollars worth of aid into Chile in an attempt to prop up the tanking socialist economy. The USSR’s record in squashing all internal dissidence did not bother Allende in the 1970s, well after the crimes of Joseph Stalin were made public. Today we know even more about these atrocities—but Dorfman apparently still doesn’t think it’s worth a look.

Perhaps most astoundingly, Dorfman seems to feel no guilt whatsoever over what the government he worked for did to Chile’s economy. An anti-Pinochet history book reports: 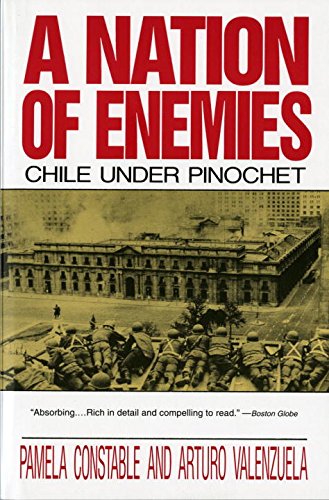 When the new junta convened on September 12 [a day after the coup], one of its most pressing concerns was the grim state of the economy. Inflation had soared to 900 percent, essential goods were in severe shortage, and the black-market currency rate was thirty times the official value. International reserves had been depleted, and the government deficit equaled a staggering 24.7 percent of the gross domestic product. More than six hundred state-run enterprises, employing over 5 percent of the work force, were losing $500 million a year.

A Nation of Enemies—Chile Under Pinochet, by Pamela Constable and Arturo Valenzuela (1991) p. 167

My grandparents remember the last half of Allende’s presidency as 18 months of hunger, with all their free time spent looking for milk and meat for their children. My father remembers that if you accidentally ruined a shirt or pair of shoes, there was no telling when you might be able to get a replacement. (Socialist history is repeating itself in Venezuela right now.) 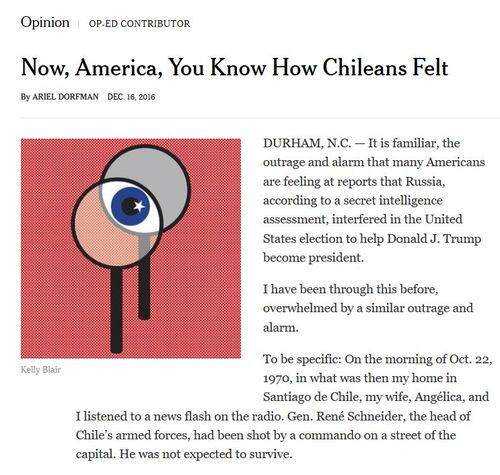 Yet Dorfman remembers none of this—perhaps because as a government functionary, he was one of very few Chileans who still had access to goods and services. His starry-eyed summary:

In 1973, a military coup against Allende, the democratically elected president of Chile, terminated an extraordinary experiment in social and economic justice. The assault was aided and abetted by the United States.
Now, America, You Know How Chileans Felt, by Ariel Dorfman, NYT, December 16,  2016

My emphasis. Of course, when you rule a country with the support of only one-third of its populace, destroy the economy and consort with communists, you can expect all the natural domestic dissent you’ll ever need. With or without the U.S., the coup was just a matter of time.

But Dorfman used his platform in The New York Times to condescend us about alleged Russian interference in the 2016 election. He made much of how similarly powerless he felt in Chile, specifically after the assassination of Gen. René Schneider, who as head of the army was blocking a military coup. The CIA was indeed involved.

However, Dorfman implies the assassination was sudden, even unexpected. The truth: those were violent times. The year before, Marxist terrorists assassinated Edmundo Pérez Zujovic, the Secretary of State—equivalent to the U.S. Vice-President—who was himself a Leftist, just not Leftist enough. Were the Russians involved in that? Were the Cubans? It’s hard to know—and doesn’t really matter. Chile, from the late 1960s through the 1980s, was polarized and violent.

Not unlike the neoconservatives, Dorfman tends to view the US as a kind of geopolitical magician who can decide the fate of a country on a whim. But just look at our “regime changes” throughout the Middle East to see how limited our power actually is.

Ask yourself the following questions: If you lived in a country where Marxist terrorists killed high-level government officials and annual inflation rates were counted with three digits, would you support a military coup? Would you mind a little help from a friendly foreign power? Would that be treason—or patriotism?

More interesting still: which actions of Pinochet’s government were justified, and which were not (he certainly was not without excesses)?

But these are not the questions Dorfman is asking. Instead, he is just guilt-mongering in the service of generic Leftist anti-Americanism, unrepentant socialism, and anti-Trumpism to boot.

In his December 17 Los Angeles Times diatribe, Dorman kvetched at painful length about what Americans should be asking themselves after Trump’s electoral triumph:

Did I ignore past transgressions that corrode today's society: the discrimination, the sexism, the violence, the authoritarianism, the intolerance, the imperial ambitions, the slavery and greed and persecutions that have darkened America's story? Did I overestimate the strength of our democracy and underestimate the decency of my neighbors? Was I too fearful, too complacent, too impatient, too angry? Whom did I not talk to, whom did I not persuade? What privilege and comforts, what overwork and debts, kept me from giving my all? What injustice or humiliation or bigoted remark did I witness and let pass? How can I help to recover our country, make it once more recognizable, make it luminous and forgiving?

But has Dorfman asked himself any of these questions about Salvador Allende’s government, which really was incipiently totalitarian? Does he ever bemoan Communist Cuba’s many interventions in the politics and wars of countries across the globe? [The Cuban Army Abroad – Fidel Castro’s Foreign Cold Warriors, by MilitaryHistoryNow.com, January 29, 2016]

Trump may not be your cup of tea, but he is not bringing about record-breaking inflation, nor inviting Bashar al-Assad to come to the US and giving him an inscribed a firearm.

In the great tradition of Leftist academics, Dorfman refuses to be held accountable for the crimes of his ideological allies. But his specific case is more egregious. He did not just support monstrous Leftists in theory— he worked for them in practice. Chile rejected the unbearable fruits that Dorfman’s “extraordinary experiment in social and economic justice” bore. So now, he is here in the US, lecturing us.

Ariel Dorfman’s personal experience does not give him unique moral insight—quite the opposite. He helped wreck one country, and he’d be happy to wreck this one as well. The New York Times should be ashamed of itself for publishing his thoughts on Shakespeare [Shakespeare’s Torture Test, July 22, 2017] and El Salvador, [Ariel Dorfman on an American Martyr: El Salvador, 1980, December 23, 2016], not to mention his weepy and dishonest political polemics. [Neruda, Pinochet and Rumors of Murder, October 30, 2017]

Marxist propaganda is not, alas, a job Americans won’t do.