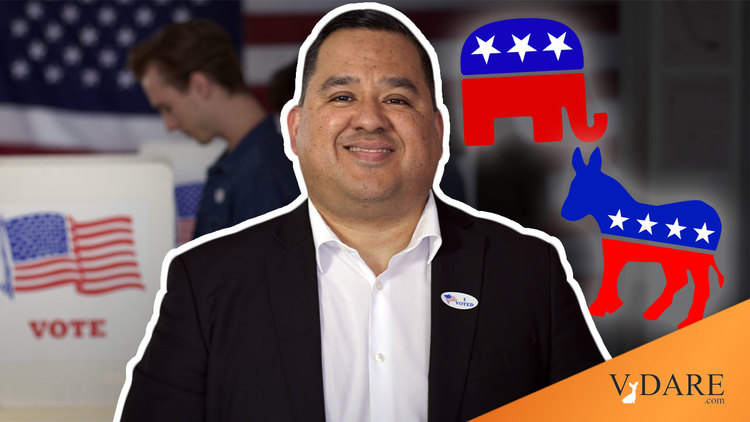 Allan Wall is an American living in Mexico, where he doesn't have a vote. Presently employed as an English instructor and administrator, Wall has legal permission from the Mexican government to live and work in Mexico under the rubric of an FM-2 migration document (No. 312448) for which he had to pay $1,816.00 pesos for renewal this past year.

George W. Bush and the Republican leadership have staked the future of the party on the slender hope of winning the Hispanic vote. Proven vote-getters such as Official English and immigration reform have been cast aside in the mad rush to please Hispanics (or the activists who purport to speak for them) at all costs. Even Bush's spectacular failure to win the Hispanic vote in the Y2K election has not cooled their ardor for the "Hispanic Strategy". Like Samuel Johnson's description of a second marriage —"The triumph of hope over experience" — the GOP soldiers on.  If they could only be a little more sensitive, use a little more Spanish, if they could just pander a little bit more, then surely, surely, the much-coveted Hispanic vote would be theirs.

I believe they are wrong. It is highly unlikely that in this generation, the Republicans will win the majority of the Hispanic vote. And it's not because the Republicans are racist, anti-immigrant, or xenophobic — I see no evidence that they are. But due to a number of overriding social factors, the majority of today's Mexican immigrants are unlikely to vote for the Republican party — they are simply not attracted to it. And most of these factors are applicable to Hispanic immigrants in general (with the exception of the Cubans). In short, the Republican leadership is pulling out all the stops to win voters who are probably unwinnable.

1] Family Connections Influence Mexican Immigrants To Vote For The Democrats

U.S. immigration is based on "family reunification", which in other walks of life would be known as "nepotism". The majority of legal immigrants are admitted simply on the basis of their already having a relative in the U.S. And since the majority of Mexican-Americans vote for the Democrats — what political party do you think their immigrant relatives will vote for? Bear in mind that the majority of voters, of whatever background, do not choose their political party as a result of careful study and reflection — most people vote for the same party that their family does! So family connections influence new immigrants to vote for the Democrats.

"The party of the rich."

"Republicans are bad to Mexicans."

Rest assured that I attempted to correct such false ideas of the Republican Party. But whether I convinced my listeners or not, there are others with the same ideas. I don't mean to suggest that every Mexican has a bad opinion of the Republican Party, but there is definitely a sector of the population that is already prejudiced against the GOP. Bill Clinton became popular among many Mexicans, and was widely acclaimed for bailing out Mexico after the peso crash, while the Republicans were blamed for being against it. By the way, the Monica Lewinsky scandal didn't seem to hurt Clinton's popularity in Mexico, though later John Ashcroft was vilified  as "conservative" - a pejorative term in the Mexican media.

The Republican Party has been obsessed with tax cuts since the heady days of Ronald Reagan. Now tax cuts are fine and dandy (and would be even finer if accompanied by spending cuts!), but you can't build an entire party platform on them (as Bob Dole unsuccessfully tried to do in '96). And you surely can't use them to entice many lower-income people into voting for the Republican Party — for the simple reason that they don't pay much in taxes. (The half of the population with the lowest income pays a whopping 4% of the tax revenue.) And since Mexican immigrants are among the half of the population that makes less money, they don't care about tax cuts either! (Capital gains tax cuts? — give me a break!).

The way you hear some libertarians defend open borders, you'd think that hordes of immigrants are clutching copies of von Mises in their hands as they cross the border! What they don't seem to understand is that most immigrants, from most countries of the world, do not care a fig for philosophies of limited government. That's because the philosophy of limited government is not very strong in most of the world. (Its natural home would seem to be the Anglo-Saxon culture — but it's even under heavy attack there.)

Limited government philosophy is not even very strong in the continental European democracies being sucked into the EU superstate now under construction. Here in Mexico, the political and academic world is infused with paternalism, big-statism, even Marxism (there's a street in my city named after Che Guevara). No political party in Mexico advocates limited government. (Vicente Fox actually promised a government that would both produce wealth and distribute it!)

5] Despite What You've Heard, Mexican Immigrants Are Not Attracted By Social Conservative Politics

We've heard this one again and again — Mexicans (and Hispanics in general) are naturally conservative, strong Catholics, are family-oriented, etc., so they will eventually be Republicans.

Most Americans are pretty ignorant about contemporary Mexico; their perspectives on the country are about 50 years out of date. And this allows them to fall for such misleading stereotypes.

Many people ignore the fact that Mexico is an integral part of the Western World. As such, it has been affected by the same philosophical and social trends as the rest of the West. Name any social problem in the U.S., and you can also find it on the increase here in Mexico. Family breakdown? It's going on here (and is exacerbated by immigration, by the way). Drug abuse— it's here too. Pre-marital sex is on the increase, and extra-marital sex has been accepted for years, as long as it was practiced by a married man and an unmarried mistress. Homosexuality is becoming more accepted, and a gay rights movement is gaining strength. About 20% of Mexican mothers are single mothers.

Let me hasten to add that there are many good, moral Mexican people, with good family values — just as there are in the U.S.A. But the same social problems exist —to a greater or lesser degree — in both the U.S. and Mexico. And upon arrival to the U.S., Mexican immigrants show no interest in the social conservative wing of the Republican party and aren't inclined to vote for it. The acid test — they don't vote for the Republican Party! Why do some people expect them to in the near future?

6] Mexican Immigrants Are Being Recruited Into The Welfare State

There are those who say that the welfare state can be eliminated without reducing immigration. My question to such well-meaning people is — HOW? The present immigration system is inextricably linked to the welfare state. In fact, immigration is a massive recruitment program for the welfare state. You might even say today's immigrants are specially chosen to be welfare recipients. And receive welfare they do— at a higher rate than native-born Americans. That includes Mexican immigrants and Hispanic immigrants in general. Now which of the two major political parties is apt to push for more welfare benefits? The Democratic Party! So why do Republicans expect them to vote for the GOP? It simply boggles the imagination.

Pete Wilson, possibly the most courageous Republican politician of the 1990's, has been held up as a bad example and treated as a pariah. Don't be like Pete Wilson, Republicans are told. Wilson is accused of "losing" the Hispanic vote (but how can you lose what you didn't have?). In 1994, while running for re-election for governor of California, Wilson gave full support to Proposition 187 (which meant to cut off benefits to illegal aliens). Wilson won the election — and so did Proposition 187 (which was later struck down at the behest of the president of Mexico— but that's another story).

Four years later, politically-correct Republican candidate Dan Lungren, pandering to Latinos, repudiated Prop. 187 and refused to criticize (or even question) the mass immigration policy which was (and is) causing so many problems for the state. Not only did Lungren fail to speak up, he also lost the election — and even received a lower proportion of the Hispanic vote than Wilson had in 1994! It seems Hispanics themselves have little respect for panderers like Lungren and George W. Bush, who received a lower percentage of the Hispanic vote than non-panderer Ronald Reagan did.

What Should The Republicans Do?

The Republican Party needs to push through real immigration reform. Immigration reduction is good for the country anyway — the present system is leading us to social, educational, environmental and political disaster. Immigration should be drastically reduced and chain migration ended. Future immigrants should be chosen on their merits as individuals — and they should have to pass an English test as a requirement for entry. All federal funding for bilingual education should be cut off, English declared the official language, and practically all government business conducted in English.

Such policies are quite likely to increase the Republicans' white support and possibly even its black support (Pete Wilson received about 20% of the black vote, stratospheric for a Republican). Republicans should continue to appeal for the votes of citizens of Mexican ancestry— but by appealing to them as Americans, and not as Mexican-Americans! Such a strategy could still win the votes of those Americans of Mexican ancestry who really agree with Republican principles, and that group of voters could actually increase as time goes by, since established Hispanics are more apt to support immigration reduction.

The present strategy of mass immigration, multiculturalism and pandering are leading the party to oblivion and the country to disaster. In contrast, a policy of immigration reform, national unity and an appeal to American interests both give the party a future and are good for the nation as a whole.

What the Republican Party needs, above all, is real leadership that will take the bull by the horns and do what needs to be done.

Allan Wall is an American citizen who has lived and worked in Mexico since 1991. Presently employed as an English instructor, Allan has legal permission from the Mexican government to live and work in Mexico under the rubric of an FM-2 migration document.  His VDARE.COM articles are archived here; his Frontpage.com articles are archived here. Allan Wall welcomes questions or comments (pro or con) at allan39@prodigy.net.mx.