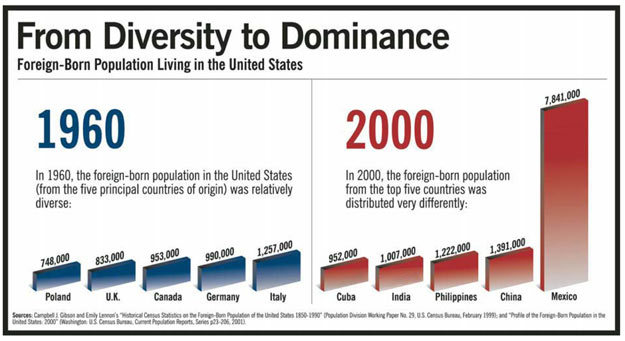 Memo From Mexico | For Mexico's Elite, It's Open Season On Samuel Huntington

"The persistent inflow of Hispanic immigrants threatens to divide the United States into two peoples, two cultures, and two languages. Unlike past immigrant groups, Mexicans and other Latinos have not assimilated into mainstream U.S. culture, forming instead their own political and linguistic enclaves-from Los Angeles to Miami-and rejecting the Anglo-Protestant values that built the American dream. The United States ignores this challenge at its peril."

That is only the first paragraph of "The Hispanic Challenge," an excellent article by Harvard professor Samuel P. Huntington, an excerpt from his much-awaited book. Please, if you haven't already, click the link and read it now

"The Hispanic Challenge" is a summary of what we at VDARE.com have been affirming as well—that today's mass Hispanic immigration, without assimilation, is a threat to the unity and identity of the United States of America.

While immigration enthusiasts equate today's Mexican immigration with that of the Ellis Island era, it's simply not the same phenomenon, as Huntington explains in detail. Roots matter. What we call American values, that made our nation great, are a legacy of our foundation by English Protestants in the 1600s and 1700s.

As Huntington succinctly puts it

"Would the United States be the country that it has been and that it largely remains today if it had been settled in the 17th and 18th centuries not by British Protestants but by French, Spanish, or Portuguese Catholics? The answer is clearly no. It would not be the United States; it would be Quebec, Mexico, or Brazil."

Needless to say, "The Hispanic Challenge" has not gone unnoticed among the Mexican chattering classes. In general, Mexican intellectuals and media analysts are much more knowledgeable about American society than their American counterparts are about Mexican society. The Mexican elite, mostly white, strongly encourages mass immigration and the Hispanization of American society, and is distinctly hostile to any Americans who speak out against it.

In the Mexican media, open season has been declared on poor Professor Huntington.

Siempre! online (April 7th, 2004) simply entitled its piece on Huntington "El Racista Huntington" [Huntington the Racist]. Not much for subtlety, is it?

Carlos Monsivais, a big-time Mexican writer/journalist/sociologist, visiting New York to give a speech, felt compelled to bash the thesis of Huntington's article publicly: "It's an idiotic, racist argument, and I'm stumped as to why he would even make it." ["Monsivais speaks out on Latinos," El Universal, April 9th, 2004]

Monsivais can ridicule the argument all he likes. But in 1999 he himself called California "a state of Mexico."

Of course, Jorge Ramos, anchorman for Univision Television, the biggest Spanish-network in the U.S.A., couldn't stay out of the fray. Blue-eyed Ramos, though a Mexican citizen, has no qualms about speaking for U.S. Hispanic citizens and meddling in U.S: politics.

Ramos' column "Enemigos Mexicanos" [Mexican Enemies—March 8th, 2004] is his contribution to the war on Huntington.

Thus not only does Ramos fail to refute Huntington, he inadvertatntly reveals that Huntington's article may be an understatement.

Bear in mind that Mexican governors are big immigration boosters. Simply put, Governor Murat would like to get as many Oaxacans out of Oaxaca as possible, so they won't be hanging around demanding jobs or social services. Murat would prefer Uncle Sam provide those benefits north of the border.

I would have been surprised if Carlos Fuentes, Mexico's premier living man of letters, did not join the hunt for Huntington, and he certainly did. Novelist, political commentator and a member of the international jet set who has hobnobbed with Bill Clinton, Fuentes is a longtime promoter of mass emigration to the U.S.

So it's not surprising he came out with a long and bitter anti-Huntington screed, entitled "El Racista Enmascarada" (The Masked Racist). The Fuentes piece was a combination of ad hominem attacks on Huntington, tired clichés about immigration, and a bitter resentment directed toward WASP culture.

In other words, it pretty much confirms what Huntington says in the article. [Published in English in the Miami Herald, March 21, 2004, as "Looking for Enemies in the Wrong Places"]

Fuentes assures us Mexicans aren't invading the U.S., but obeying the laws of the market, doing jobs that white Anglo-Saxons don't want to do blah blah. He even trots out the familiar and totally debunked argument that immigrants contribute more than they receive. His proof: If California didn't educate the children of immigrants, it would lose federal education dollars! Talk about a circular argument!

Fuentes attacks Huntington for accusing Hispanic immigration of Balkanizing the country, and seeking a reconquista of the Southwest. But rather than refute such charges, Fuentes launches into an attack on the global reach of the English language. Besides, he assures us, Hispanic immigrants learn English rapidly while preserving Spanish and "enriching the accepted multi-ethnic and multicultural character of the U.S." This is followed by another ad hominem, accusing Huntington of using tactics of "fascism."

Fuentes also takes a trip down memory lane, bellyaching about the "anti-Mexican racism" he encountered while studying in Washington, D.C. as a child, and pulls out a chestnut about an obscure 1928 encyclopedia (published when Huntington was one year old) saying something rude about Mexicans.

Fuentes boasts that "for us, Mexicans, Spaniards and Hispano-Americans, the language is a cause of pride and of unity, it is true...But it is not a cause of fear or menace."

But in 2001, Carlos Fuentes himself, in Spain for an International Congress of the Spanish Language, boasted of "the silent reconquista of the United States..."

In his attack on Huntington, Fuentes claims Hispanic culture as more inclusive than Anglo-Saxon culture:

"Maybe what keeps us together is what Huntington thinks disunites us: the multiculturalism of the Spanish language.

"Hispano-Americans are, at the same time, Spanish speakers, Indo-Europeans and Afro-Americans. And we descend from one nation, Spain, incomprehensible without its racial and linguistic multiplicity....With all this, we win, we don't lose. The one who loses is Huntington, isolated in his imaginary plot of racist English-speaking, white Protestant purity."

Of course, Hispanic culture does include a diversity of races and ethnicities. But what Fuentes doesn't mention, amidst all the Huntington-bashing, is that the ruling elite throughout the Hispanic countries is mostly white.

Carlos Fuentes himself is part of that White Elite—look at his photograph.

In Mexico, whites tend to be at the top of the racial spectrum, mestizos in the middle and Indians at the bottom.

Notice too, that white Mexican elitists love emigration. After all, emigration removes a large percentage of poor and non-white Mexicans out of Mexico and into the United States, removing pressure on the elite.

Mexican white elitists wouldn't be promoting their own racial interests, now, would they?

American citizen Allan Wall lives and works legally in Mexico, where he holds an FM-2 residency and work permit, but serves six weeks a year with the Texas Army National Guard, in a unit composed almost entirely of Americans of Mexican ancestry. His VDARE.COM articles are archived here; his FRONTPAGEMAG.COM articles are archived here; his website is here. Readers can contact Allan Wall at allan39@prodigy.net.mx.