Memo From Mexico| A Gay Illegal Alien (And Fraudster) Can’t Be Deported Because Mexico Is Homophobic—Wait, What?

The Main Stream Media has unveiled another sob story, this one a diversity twofer about a gay Mexican illegal alien who has been saved from deportation because he faced persecution in Mexico. [Gay Mexican immigrant wins federal court case, can remain in Miami, by Alfonso Chardy, Miami Herald, December 22, 2015]. But Mexico is not remotely a “homophobic” country. It’s just another case where the MSM simply wants more Third World immigration—justified by any means necessary.

Jose Crespo-Cagnant is a very white Mexican, indeed, one who bears a certain resemblance to Bush crony and former U.S. ambassador to Mexico Antonio Garza. And Crespo-Cagnant has a long history of immigration fraud:

As part of the application process for the TN visa, Jose Crespo-Cagnant had to leave America and go to Mexico City for a visa interview at the U.S. Embassy. His TN visa application was turned down because his actual job didn’t fit its specifications. What’s more, when American officials found out he had not reported his immigration fraud, Jose’s visitor visa was revoked.

According to the Miami Herald’s Chardy [Email him] this left Jose “stuck in Mexico without a visa to return to the United States legally.”

In 2012, Crespo-Cagnant crossed the Rio Grande and reentered America as an illegal alien. Unfortunately for him, he was apprehended in Texas and placed in expedited removal proceedings. Thus there was no legal impediment to simply removing him from the country.

Crespo-Cagnant claims he told immigration officials he would be persecuted as a homosexual if he was returned to Mexico. Brenton Reveruzzi, the officer who interviewed him, testified that Crespo-Cagnant never said this. But that’s Crespo-Cagnant’s story now, as expressed in court documents.

Either way, Crespo-Cagnant was sent back to Mexico. But he once again entered the United States illegally. He was again apprehended and removed.

A few weeks later, he entered illegally again and made it to Miami, where his partner lives and owns a home. In 2013, Crespo-Cagnant and his partner were “married” (apparently not in Florida, as it wasn’t legal in that state at the time). After that, he contacted immigration attorney Rebecca Sanchez-Roig [Email her] to apply for U.S. residence. During this process, Jose was again arrested for re-entering the U.S. after deportation.

His lawyers filed for dismissal of the expedited removal order. Incredibly, they succeeded.

U.S. District Judge Ursula Ungaro—a George H.W. Bush appointee, right—invalidated the expedited removal order against Jose because, according to the Miami Herald article, “[I]mmigration officials had failed to consider [his] plea not to be returned to Mexico for fear of persecution because he is gay.” His lawyer bragged this meant he was “free out of any kind of criminal charges” and he can “adjust his status.”

So is Mexico a seething cauldron of gay hatred?

I lived in Mexico for 15 years. I met plenty of homosexuals. I never saw any persecution.

There are occasional reports of anti-gay violence in Mexico, including some deaths [Killings of Gays Increase in Mexico: Report, Huffington Post, July 14, 2010]. But how many were not murdered because of their homosexuality? How many were killed by jilted gay lovers? A former Mexican student of mine did just that, killing his long-time lover who said he was going to leave him.

Also, how many of the killings are simply part of the general violence and lawlessness which exists in Mexico? After all, Mexicans don’t have much confidence in their legal system. We need more information before we can say Mexico is plagued by anti-gay violence.

In contrast, we can assert with confidence that homosexuality has been normalized in Mexico. As in the United States, the Mexican MSM supports homosexuality and there are gay characters on TV shows and openly gay celebrities and politicians.

This happened in a remarkably short time. As in America, there was no rational debate, simply media indoctrination and shaming of those who don’t go along with the agenda.

As I wrote in my very first column for VDARE.com back in 2001: “Homosexuality is becoming more accepted, and a gay rights movement is gaining strength.”

The Spanish term “homofobia” has the same artificial and misleading meaning as the English language term “homophobia.” In one of my Mexican high school classes (in English) during the period 2006-2008, a student of mine said I was “homophobic” for not agreeing with gay marriage.

And there is an active gay tourism industry in Mexico [Rainbow Beach Towels On Mexican Sand, by David Kirby, New York Times, May 16, 2004]. 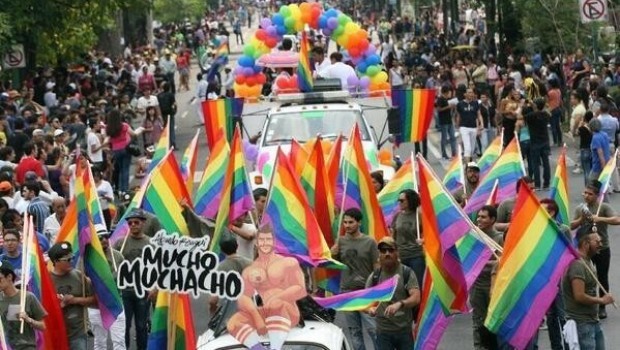 Gay pride parades have been held annually in Mexico City since 1979. In the year 2011, my family and I accidently wound up walking through the post-parade festival. Similar events are held throughout the country

Unlike the U.S. Constitution, the Mexican Constitution (which is updated frequently) specifically covers "sexual orientation." It declares that all discrimination against “las preferencias” (preferences) is prohibited.

Naturally, freedom of expression is being subordinated to “gay rights.” In 2013, the Mexican Supreme Court ruled that two gay slurs, punal and maricones were hate speech and not free speech under the Mexican Constitution. [Mexico’s Top Court: Anti-gay terms are hate speech, by Olga Rodriguez, World Post, March 7, 2013]

Just as in the US, there are hysterical MSM attacks on public figures who don’t go along with the agenda. Talk show host Esteban Arce was savaged for criticizing homosexuality [Twitter arremete contra Esteban Arce, El Universal, January 5, 2010]. A young activist in the PAN party, traditionally the more Catholic Mexican political grouping, was even thrown under the bus by his party after criticizing homosexuality.[Josefina se desmarca de declaraciones de #JuanPabloCastro sobre el ‘matrimonio de jotos,’ SDPnoticias, March 9, 2012]

And although almost completely ignored by American MSM, the June 26, 2015 decision of the U.S. Supreme Court to mandate same-sex marriage was preceded earlier that month by a similar decision south of the border: The Mexican Supreme Court ruled no state could refuse marriage to a gay couple, regardless of state laws. [Mexico supreme court says state laws limiting marriage to man and woman unconstitutional, AP, June 12, 2015]

This prompted Richard Grabman of The Mex Files website to blog triumphantly on June 8: “Beat ya! Mexican Supreme Court one up on the US Supremes.”

The folks over at Equaldex, “a collaborative LGBT knowledge base built by people like you,” actually have a webpage comparing “LGBT Rights” in Mexico and the United States and argues Mexico gives more “rights” to homosexuals than the United States.

As far as public opinions on homosexuality, the two countries match rather closely, with a slightly higher acceptance score for Mexico.

In 2013, the Pew research center asked this question in 38 countries: “Should Society Accept Homosexuality?”

The highest score went to Mexico’s mother country Spain, at 88%. (So much for the old stereotype of Spaniards as fanatic Catholics).

Besides, what counts as “persecution?” I´m writing this in Mexico, and on the same day I saw the Jose Crespo-Cagnant article, my family saw an openly gay customer (and his partner) ask a clerk for a certain shade of lipstick in a store. When they didn’t have it, he asked why, then requested another color

Does that count as persecution?

Homosexuality is, for all practical purposes, just as accepted in Mexico as it is in the United States. As Crespo-Cagnant is a white, urban-looking Mexican, he could fit in quite comfortably in the powerful gay subculture of Mexico City, where gay marriage has been legal since 2010.

But it’s not about him. It’s about us. The same year traditional marriage was abolished by kritarchs on the Supreme Court, another of the breed tells us a foreigner who didn’t respect our laws must be protected from nonexistent Mexican “homophobia.”

The common denominator: hatred for the historic American nation and its traditional, Christian culture.