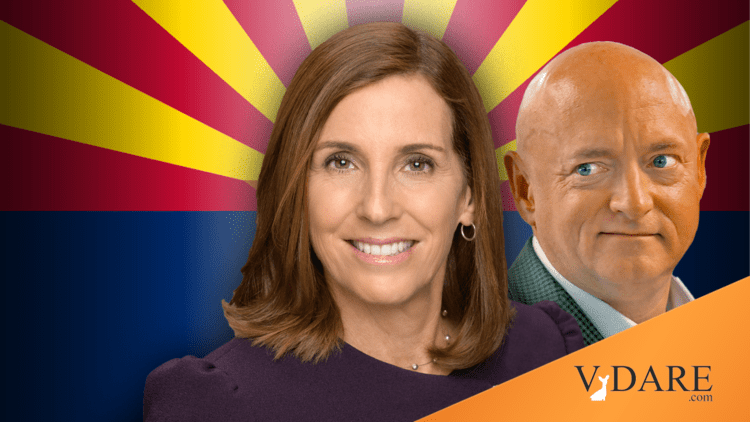 Every poll shows Arizona Senator Martha McSally (R-AZ) losing to Democratic opponent Mark Kelly. Which raises the question of why the GOP keeps backing women like her. Answer: Just as Stupid Party consultants think pandering to blacks will win the black vote, they believe nominating female candidates will win among “suburban women.” And so the party routinely picks terrible candidates, who just happen to be tight as a tick with the GOP ruling class elites—such as Georgia Sen. Kelly Loeffler, another creation of the GOP Brain Trust. Problem: It doesn’t work. Campaigning on an immigration moratorium will.

McSally looked good on paper. A 22-year Air Force veteran with a Masters from Harvard, she was the “first woman combat pilot.” (A product of Affirmative Action, of course, she is not to be confused with Robin Olds or Steve Ritchie.) She represented AZ-2 in Congress, now presents herself as a strong supporter of Donald Trump, and has even moved right on immigration.

But McSally must pose as a Trump supporter to win rural Arizonans who didn’t vote in 2018. Her act doesn’t fool anyone, except perhaps Jared Kushner [The fighter pilot takes on the astronaut: McSally’s 2020 Arizona mission, by James Arkin, Politico, March 1, 2020]. She’s an empty Establishment suit in a skirt and high heels. That’s exactly why the Establishment picked her to succeed Jon Kyl—the longtime Arizona senator who temporarily filled John McCain’s vacant seat—after her defeat in the general election for Arizona’s other Senate seat in 2018.

If McSally were in the dock facing an America First prosecutor, this would be his indictment:

Funny thing is, Sen. Kyrsten Sinema, the kooky bisexual who defeated McSally in 2018, can claim to be more Trumpian than McSally. Last summer, Sinema boasted about an effort to accelerate deportations and strengthen the border. Even Republicans and conservative commentators liked the move [Kyrsten Sinema hits a home run with immigration plan, Arizona Republic, July 23, 2019]. McSally has done nothing similar.

Yet, incredibly, McSally is the candidate the strategic planners at GOP Central Command think will beat Kelly, a popular and personable former astronaut and Navy aviator who is married to Gabby Giffords, the former congresswoman nearly killed in a 2011 shooting that the Leftist media tried to blame on Sarah Palin (and, then, even more dishonestly, on American Renaissance’s Jared Taylor. In some sense, the Giffords shooting was the beginning of the Ruling Class drive to suppress the Dissident Right and prevent it from defending itself against false charges, which became frantic after Trump’s election. Significantly, Fox’s original libel of Taylor is still—as of 5/22/2020, 6 p.m.—on its website: Arizona Suspected Gunman Passed FBI Background Check, by Jana Winter, January 9, 2011.)

Kelly has plenty of centrist appeal, and will, of course, get sympathy votes. But, of course he’s just like every other Democrat:

But those sins haven’t yet dulled Kelly’s spaceman credentials, as his 13-point lead over McSally well shows [New poll shows Sen. Martha McSally losing ground to Mark Kelly and that's not even the bad news, by Laurie Roberts, Arizona Republic, May 19, 2020].

Here’s the thing. Kelly is crushing McSally but the Real Clear Politics average of polling data puts Sleepy Joe Biden just 4 points ahead of Trump. It appears that Arizonans prefer the populist vulgarian to the “first woman combat pilot” and former habitué of Harvard Yard.

In other words, Arizona is not a state where a Republican should lose by double digits.

So why would Mitch McConnell and other GOP leaders insist on running a proven loser in 2020 instead of a stronger candidate such as Paul Gosar or Andy Biggs—both with an A+ from NumbersUSA?

The alleged answer: She is woman and she is strong. “The road back to the majority is through the suburbs, and the road through the suburbs is going to be with strong female candidates,” National Republican Congressional Committee chairman Tom Emmer proclaimed last year. The NRCC approached nearly 200 women to run for Congress in 2020 [GOP amps up efforts to recruit women candidates, by Juliegrace Brufke, The Hill, May 25, 2019].

Bunk. Apparently, Emmer didn’t notice that McSally, who told “Washington Republicans to grow a pair of ovaries and get the job done,” in a campaign ad, lost her target demographic, college-educated white women, by 12 points.

And, for that matter, Arizona Republican Establishment had another woman it could have appointed in 2018: Kelli Ward, who heroically challenged John McCain in 2016 and lost in the primary to McSally in 2018. But Ward is an immigration patriot. (She has been rewarded with the plum position of Chair of the Arizona GOP.)

That same rationale is behind Georgia Gov. Brian Kemp’s appointment of no-name Kelly Loeffler to the Senate. Like McSally, Loeffler looked great on paper. She’s a good-looking successful businesswoman thanks to her wealthy husband, New York Stock Exchange chairman Jeffrey Sprecher, and didn’t carry any heavy baggage. But she has even less charisma and political skill than McSally.

Nevertheless, ignoring her lack of experience, Kemp selected her over the much more qualified and more conservative Doug Collins, whom she faces in November because no primary will be held this year. She, too, would win those much-touted “suburban women,” the GOP thought. But it now looks like Loeffler might have to drop out of the race because she dumped a lot of stock after a secret Senate briefing on the Chinese Virus [Loeffler’s campaign hoped for a reset. But senator’s stocks came under new scrutiny, by Francesca Chambers, McClatchyDC, May 15, 2020].

And that might be a smart move. Collins has a 22-point lead in the latest poll [Georgia Senate poll: Top Dems, Perdue essentially tied, Loeffler trails Collins, by Greg Bluestein, Atlanta Journal-Constitution, May 19, 2020].

And those are only two of the many terrible woman candidates with which the GOP is as enamored as it is with conservative blacks.

The odious Nikki Haley has long been considered a replacement running mate for Trump because she, too, will impress “suburban women” [No, Donald Trump is (probably) not dumping Mike Pence for Nikki Haley, by Chris Cillizza, CNN, March 3, 2020]. Of course, that ignores Haley’s rejection of Trump in 2016 and comparing him to mass shooter Dylann Roof [Nikki Haley links Trump's rhetoric to Charleston church shooting, by Jesse Byrnes, The Hill, June 3, 2016]. But the cuckservatives who want a neocon woman on the ticket still love her.

Similarly, the GOP consultant Establishment strongly backed Carly Fiorina and Meg Whitman, candidates for governor and senator in California in 2010. Both pandered to Hispanics with Leftist  immigration policies; both lost by double digits.

One failure was enough for Whitman, but Fiorina continued to embarrass herself. Her GOP presidential candidacy in 2016 was, to put it as charitably as possible, laughable, despite support from the Keystone Cops who run the GOP and Beltway Right.

For the record, not all women GOP candidates are bad. Tennessee Sen. Marsha Blackburn is good on immigration and Big Tech [Rep. Marsha Blackburn: Social media is censoring conservative speech, by Michael Collins, The Tennessean, April 26, 2018]. She easily won in 2018 with an America First message that did not tout her sex.

But here’s how stupid the Stupid Party is. It supports McSally, who has lost once and appears to be headed for a loss again, but it won’t support Kris Kobach, a dynamic populist who, unlike McSally, has twice won a statewide election. Yet Kobach, not McSally, is supposedly “unelectable” according to the GOP Establishment.

The real problem: The GOP Establishment, and the consultants, just don’t want an immigration patriot champion in the Senate (or the House)  who might upset the Chamber of Commerce donor class.

In other words, the GOP Establishment learned nothing from Trump’s victory in 2016. It’s almost as if Trump never ran.

Our advice: The sex of the candidate is unimportant. An America First platform is what counts.

Trump should campaign on his original brilliant April 20 immigration moratorium tweet (no matter what Javanka says).

And Martha McSally will fall in line. She’s career military, isn’t she?

Campaign ConsultantsGOP Share Of The White Vote
<< Previous
Next >>
LATEST