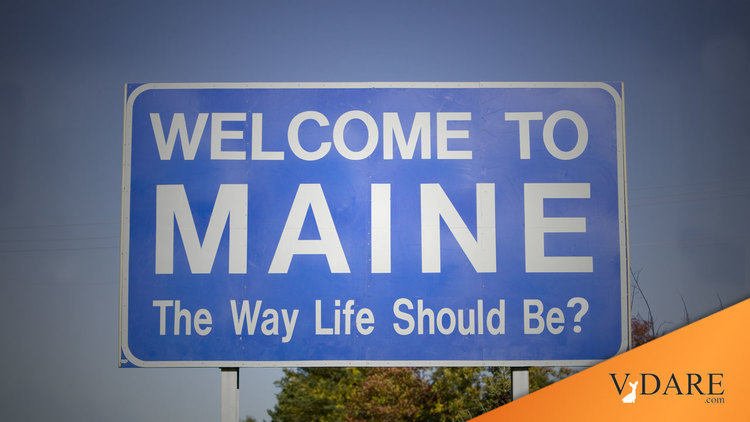 Maineiacs vs Hijracrats: Paul LePage And The Coming Battle Over Immigration In Maine

Earlier: Remember Maine! The Whitest State, Where Americans Are Still Doing Jobs That “Americans Won’t Do”

As one approaches the Maine border, one encounters a welcome sign that reads: “Maine, the way life should be.” Every time I encounter that sign I sense a double meaning. Maine is the America of 50 years ago—virtually all white, peaceful, and law-abiding.

Our post-American elite like to portray cultural insularity as a form of provincialism or “xenophobia,” but it is really a virtue. You have to, in some sense, pay your dues before you become accepted into a small-town New England community. Maine is a collection of the “little platoons” of society, as Edmund Burke called them, and that is what gives the region such charm.

Maine’s most obvious asset, however, is its natural beauty with a stunning rocky coast, old-fashioned ports, and a verdant mountainous interior peppered with bucolic lakes. Unfortunately, this picturesque beauty has also made Maine a magnet for the Rockefeller Republicans. [Maine’s Keepers of the Very Rich, by Art Harris, Washington Post, July 2, 1978]

In fact, the original Rockefeller Republican, Nelson Aldrich Rockefeller, was born in Bar Harbor. This former Governor of New York and Vice-President of the United States was the grandson of J.D. Rockefeller and Rhode Island Senator Nelson Aldrich, one of the central figures of the infamous “Jekyll Island Meeting” that gave birth to the Federal Reserve system.

Over the years Nelson Rockefeller and his plutocratic colleagues used their financial influence to shove Stupid-Party policies down the throat of the GOP, making it essentially an echo of the Open Borders Democrats. Indeed, it was Rockefeller who spearheaded the sabotage of Barry Goldwater’s candidacy at the 1964 Republican Convention.

One year later, Governor Rockefeller was present at the Ellis Island signing of the Hart-Celler Immigration Act of 1965, which he enthusiastically supported.

Maine has a year-round population of only 1.344 million. However, many of the plutocratic elite, such as the Bush Family, only live there part-time. Nevertheless, these elites continually insert post-American rubber stamps into Maine political office to do their bidding—like William Cohen, a Republican who made his political mark in his first Congressional term by voting to impeach Richard Nixon during Watergate, and was subsequently rewarded with a Senate Seat, and later the position of Secretary of Defense for President Clinton. (Incidentally, Cohen also served as Best Man at John McCain’s wedding).

For years Maine’s post-American legislators rarely paid a political price for the nation-breaking immigration policies they advocated because their constituents did not have to suffer the direct consequences of them. However, that all began to change some 20 years ago after the Somali refugee invasion of Lewiston (a disaster already well-chronicled in VDARE.com). Somalis have also been resettled in Auburn and Portland and other New England cities. 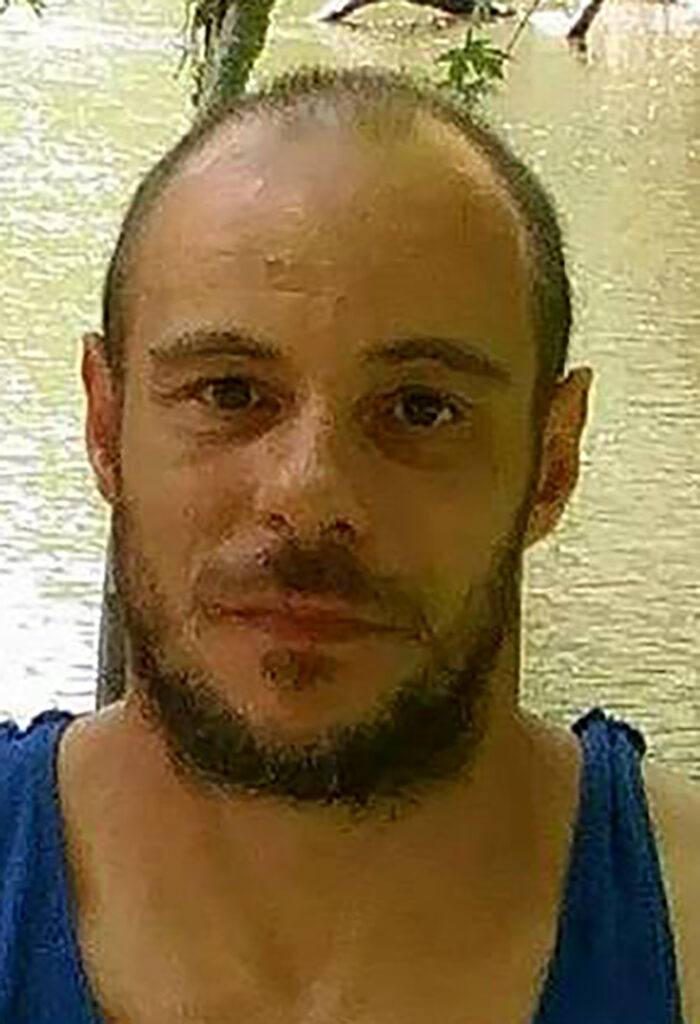 Despite a considerable amount of happy talk, Somali refugees in New England remain largely unemployable and often criminal. In fact, there have been many wilding incidents in these refugee enclaves, such as a daylight attack in downtown Lewiston by a group of Somali teens who menaced a group of whites with rocks and baseball bats, resulting in the murder of Donald Giusti, right, whose skull was crushed with a handheld brick [Three arrested in Donald Giusti's killing, by Mark LaFlame, Lewiston Sun Journal, April 11, 2019] [See some video of the incident here]

Naturally, this degeneration caused citizens to complain to their federal representatives, who (naturally) did nothing. Worse, the Bush Justice Department sent a legal team to Lewiston to make sure the civil rights of the Somalis had not been violated. [In Maine Town, Sudden Diversity And Controversy, by Michael Powell, Washington Post, October 14, 2002]

What were the good people of Maine supposed to do?

Aristotle tells us that nature abhors a vacuum, and as Maineiacs began to realize that their post-American representatives had no desire to represent them, a small town mayor named Paul LePage decided to run for governor in 2010— the first Maineiac to do so in post-1965 America—and he won.

Over the course of eight years Paul LePage governed as an unabashed Maine First patriot. He issued a state record 642 legislative vetoes, and publicly, though not always effectively, opposed state aid for illegal immigrants and asylum seekers. LePage also ordered state Sheriffs to cooperate with ICE and told them that if they resisted they would be removed [LePage to sheriffs: Cooperate with ICE detention requests or face removal, by Michael Shepherd, Bangor Daily News, September 27, 2016].

That is leadership, and the Maineiacs loved it, but the non-Maineiacs fumed with indignation.

The peculiar challenge for Maine is that it has become a target for what one might call the “ethno-masochist pioneer.” Just as Muslims have the concept of hijra, which is the project of moving to the land of the infidel with the express purpose of demographic replacement, white Leftists have been relocating to peaceful whiteopias with the specific goal of engineering demographic change. Perhaps we should call them “hijracrats” and “hijracons”.

Some of these hijracrats have taken positions in the local Maine media, which is largely run by out of state transplants. They have been reliably apoplectic over LePage’s views on immigration.

For example, the editorial page editor for the Portland Press Herald, Greg Kesich, is a New York native who has grown hoarse insisting that Maine needs more Third World immigrants in order to “stay competitive”—

Portland has problems, now and looming in the future. But ‘overrun with immigrants’? Please. We should be so lucky.

[The View From Here: You could do worse than boring: Paul LePage's attacks on Maine's immigrant community haven't ended with his term in office, by Greg Kesich, Portland Press Herald, February 3, 2019]

I could go on, but you get the idea.

Is it any wonder that Governor LePage made it an official policy to not communicate with three Maine dailies? LePage even visited an eighth grade classroom and told the students that “Reading newspapers in the state of Maine is like paying somebody to tell you lies" [LePage Tells Students To Keep Their Options Open, by Ben McCanna, Kennebec Journal, March 14, 2012]

Yes, Paul LePage was that rare politician who is not afraid to tell it like it is, which is why the media despise him and the Maineiacs love him, even though he occasionally goes overboard. For example, LePage once criticized a political opponent by saying: “Senator [Troy] Jackson claims to be for the people but he’s the first one to give it to the people without providing Vaseline”  [Maine governor offers crude metaphor involving Vaseline, Washington Post, June 20, 2013, See video here]

Due to term limits, Paul LePage could not run for reelection in 2018, but he intends to run for Governor again in 2022 This campaign will definitely have national significance, especially given that the incumbent Democrat, Governor Janet Mills, is a dedicated America Last Leftist.

As immigration patriots, our victories are few these days, and if we are to reverse our situation then we must scout out our battlefields in advance, and choose a place to stand our ground. There may be no better standing ground than next year in Maine.

This promises to be a bruising battle. The Beltway machine will airdrop their media minions into the state and portray patriots as “white supremacists” and “insurrectionists”. And George Soros will bus in his Brown Shirts to terrorize innocent whites with bike locks and baseball bats.

However, we can prevail if we frame the 2022 election as a choice between America First vs America Last—that is a winning message if we have the courage to make it early and often.

Who knows? By the end of next year we may all be calling ourselves Maineiacs.