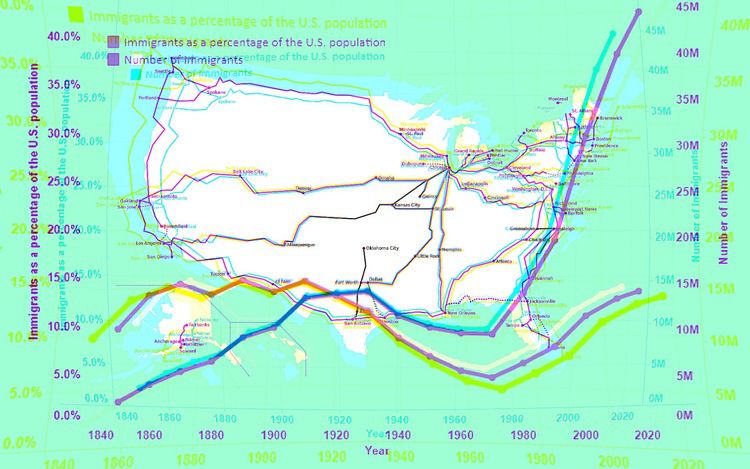 The “Great Replacement,” the systematic dispossession of white Americans and Europeans by Third World immigrants, is either a “conspiracy theory” or a self-evident good depending on who is talking about it. Main Stream Media publications recently denounced those who discuss it as accomplices to terrorism or at least purveyors of fake news. Yet other journalists, some from the same publications, run articles gloating about the obvious political consequences of immigration-driven demographic change. In a step beyond the “who, whom” model where everything is analyzed from the standpoint of which group benefits, we are now in a situation where people making the same objective observation are either good or bad depending on their views about it. It’s beyond politics; it’s madness.

A typical example: American expat Mellissa Rossi’s hysterical article, “’Great Replacement’ ideology is spreading hate in U.S. and across the globe” .[Yahoo News, June 30, 2019] Incredibly, this is meant to be straight news. It casually associated white advocate Martin Sellner with Christchurch shooter Brenton Tarrant because they share a “controversial belief” in the replacement of white Christians. She says Sellner views this eventual replacement as a “mathematical fact” and she even admits that “statistics show, [this] is true in some countries.” However, she says it is “off the rails” because the percentage of Muslim will not be majority status anytime soon—according to “experts.”

The obvious counter, made by Sellner: if you extend the timeline, Muslims eventually replace the native population. But Rossi simply dismisses this as a “shaky premise” that has “inspired mass shootings.” The obvious intention: to scare people away from even exploring these ideas, even though she has no real argument against them. Neither does anyone else except name-calling and accusations of violence: 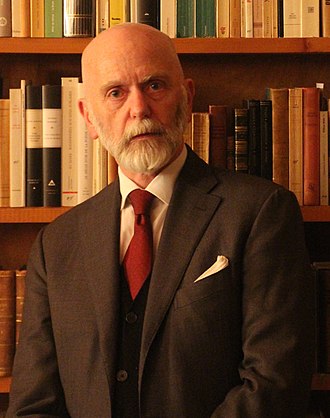 The French writer Renaud Camus (right) is credited with coining the term the “Great Replacement.” The Nation gave him the typical point-and-sputter treatment with How Gay Icon Renaud Camus Became the Ideologue of White Supremacy, by James McAuley on June 17, 2019. Again, besides name-calling and accusing Renaud’s style of being “kitsch,” McAuley simply assures his readers that there is nothing new happening: “Significant demographic changes occurred during decolonization in the 1960s and ’70s; the arrivals today are hardly unprecedented,” he says.

Yet those changes had disastrous consequences for France. Charles de Gaulle also specifically advocated de-colonization in Algeria to avoid sparking mass migration [Charles de Gaulle and the Idea of France, by Gregory Hood, American Renaissance, June 14, 2019]. In retrospect, Europe should have just kept its empires; Third Worlders will follow whites wherever they go.

Journalists are also trying to condemn local GOP politicians for supposedly believing in this “conspiracy theory.” When Maine Republicans suggested Americans should be helped before asylum seekers, Greg Kesich at the Press-Herald detected another motive:

[Former Maine Governor Paul] LePage, [Waterville mayor Nick] Isgro, [Maine Republican Party Executive Director Jason] Savage and their allies are not being inconsistent about housing policy; they are being very consistent about something else—the alleged threat to white power posed by immigration, as described in the “Great Replacement” or “White Genocide” conspiracy theory.

Yet demographic changes have undeniable political and social implications. And, regularly, journalists smoothly transition from saying nothing is happening to bragging about what is happening, especially in American politics. 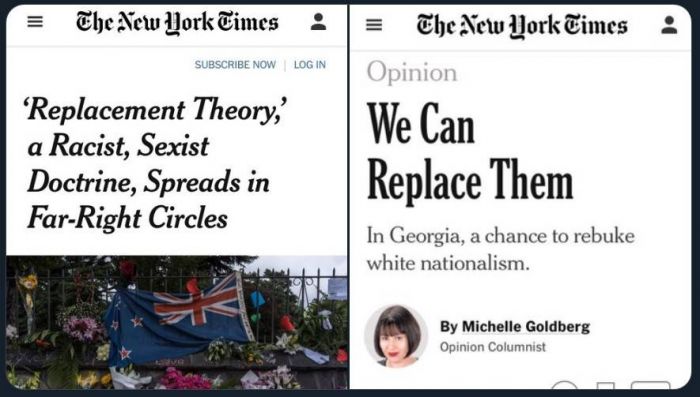 (I note in passing that if I wrote that I didn’t want to be “swamped by a new multicultural polyglot majority,” I’d be accused of racist and dehumanizing language).

Goldberg also claimed the Right is trying to forestall the emergence of this multicultural majority “at all costs.” (If only).

For the first time ever, half of all Americans under the age of 20 are Hispanic, black, Asian American, or mixed race. They’re the mosaic created by a modern immigration wave that has brought more than 60 million newcomers here since 1965, nearly nine in ten of them nonwhite.

For them, diversity isn’t merely demography; it’s the beating heart of their value system.

Taylor calls them “mosaics” because they will keep their own identity in a cultural “mosaic” rather than a melting pot. He notes his interview subjects believe America has always been racist and their cynicism may actually keep them away from the polls.

The demographic changes that created the Mosaic generation have already transformed America.

It was only a dozen years ago that same-sex marriage, legal marijuana, and transgender rights were barely imaginable; Confederate statues stood tall; and no one had heard of Black Lives Matter, #MeToo, March for Our Lives, or Occupy Wall Street. Even in electoral politics, times have changed, though it doesn’t feel that way with Trump in the White House. But since 1992, Democratic presidential candidates have won the popular vote in six of seven elections. No political party in American history has ever accomplished that feat before (or had less to show for it, due to Electoral College inversions in 2000 and 2016).

Now, as Mosaics start pouring into the electorate, this big blue wave will keep getting even bigger.

“The US white majority will soon disappear forever” proclaim Dudley Poston and Rogelio Sanez in The Chicago Reporter [May 16, 2019] Their explanation? “[B]asic demography: births, deaths, and immigration.” In other words, the exact arguments made by Martin Sellner and others. However, because these journalists don’t oppose it, it is permissible to state these facts.

Similarly, Stef Knight at Business Insider dutifully reports that the United States is on the way to becoming a non-white majority by 2045 [May 1, 2019]. “The demographic shifts are already having an impact on our national identity, politics and the generational gap, according to sociologists and demographers who have studied the trends,” he proclaims.

Suddenly, something big is happening, and journalists admit the consequences. But they can notice it, whereas nationalists simply aren’t allowed to.

Anyone, even a journalist, would speak about the process differently if we weren’t talking about the West. When the Chinese government floods Tibet with Han migrants, everyone understands it is colonization [Beijing sends a new flood of Han migrants to Lhasa: Tibetans risk disappearing, Asia News, January 27, 2015]. It’s perhaps for that reason that the Dalai Lama recognizes that Third Worlders need to go back, lest Europe become an extension of Africa or the Middle East [Dalai Lama warns Europe could become ‘Muslim’ or ‘Africa,’ by Zachary Halaschak, Washington Examiner, June 27, 2019]

If Israel became majority Arab, it would cease to be a Jewish state. Israel’s existence would be pointless.

Decades ago, Rabbi Meir Kahane debated future Israeli Prime Minister Ehud Olmert on this question, and Olmert essentially said Kahane was right, but that the demographic transition was simply too far away to worry about. Yet the Israeli government today takes it seriously, working to increase Israeli birth rates and openly discussing the demographic issue. And so do American politicians, including Bernie Sanders, who freely admitted a one-state solution with equal rights for Jews and Palestinians would be the “end of Israel,” and thus something he opposes. But he has no such attachment to America, at least not anymore.

On Amazon, you can watch a documentary called “When Siberia Becomes Chinese,” which matter-of-factly discuss the political and cultural consequences of Chinese migrants moving into Russia’s thinly populated Far East looking for work. A New York Times opinion piece on the same subject concluded, “facts on the ground can become lines on the map”. [Why China Will Reclaim Siberia, by Frank Jacobs, January 13, 2015]

Journalists who tell us mass migration has no consequences insult our intelligence.

Of course, most of the journalists calling the Great Replacement a “conspiracy theory” do know this—they are simply being disingenuous. They look forward to the day the West is deconstructed for good. In other articles, they let the mask slip.

Yet Conservatism Inc. too tells patriots that America’s magic dirt will somehow transform Third Worlders into the heirs of the Founding Fathers. This is nonsense, and only the most naïve conservative believes otherwise. Politics may be downstream from culture, but culture is downstream from demographics. Both Leftist journalists and Identitarian activists know the Great Replacement is happening. Conservatism Inc. prevents the American Right from doing anything about it.

Forget about saving “conservatism”—Westerners must wake to this demographic tidal wave lest their culture, people and civilization be extinguished. If they don’t, every battle won or achievement made by Western Civilization is rendered pointless.

And no matter how shamefully or eagerly they surrender, Westerners won’t be remembered as graceful losers—just a bunch of racists.