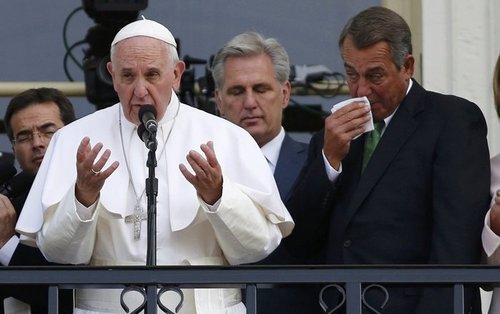 Outgoing Speaker John Boehner just told Face The Nation (September 27) that there will be no government shutdown i.e. the GOP majority will continue to capitulate to Democratic minority on Planned Parenthood defunding and whatever else the Democrats want. He confirmed his view that Senator Ted Cruz is a “jackass” for arguing otherwise. Business in Washington, in short, will continue as usual to the end of Boehner’s disappointing career. [Boehner to move on deeply unpopular bills, House conservatives warn, by Barbara Boland, Washington Examiner, September 26, 2015]. 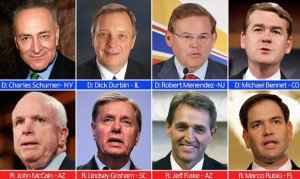 But I will say one good thing about John Boehner: he wasn’t willing to risk his Speakership to pass Amnesty. In 2013, the Senate overwhelmingly passed the Schumer-Rubio Gang of 8 Amnesty/Immigration Surge bill. With the political winds pushing towards Amnesty, Boehner offered lip service to it. However, when his caucus pushed back, he meekly backed down. A true believer (like Jeb Bush) would have risked his career.

As I noted prior to the 2010 elections, Boehner was not actively bad on the issue, but he would “clearly would like to ignore immigration as much as possible.” And this has proven to be prescient. When patriotic immigration reform movement had momentum, Boehner was a major obstacle. However, when immigration patriots were on the defensive, it was not completely bad.

When Boehner assumed the Speakership in the beginning of the 112th Congress, immigration patriots were on the offensive. They killed the Democrats' lame duck DREAM Act, Arizona’s SB 1070 was popular, and there was a serious discussion of ending birthright citizenship.

However, as Speaker, Boehner did not let a single serious piece of immigration control legislation get to the floor—even very moderate reforms. Thus in 2011, Rep. Lamar Smith pushed the Legal Workforce Act, which would have mandated E-Verify nationwide, though it would pre-empt state and local immigration employment laws. The bill passed the House Judiciary Committee, but Boehner did not let the full house vote on it. [Immigration group blasts Boehner for failing to crack down on illegal workers, by Stephen Dinan, Washington Times, March 7, 2012]

Mandating E-Verify is incredibly popular, and by pre-empting the state laws, Smith managed to get much of the Cheap Labor Lobby To support, or at least not actively oppose the bill, because they wanted predictability and feared more radical state action. Indeed, many immigration patriots, such as Phyllis Schlafly, Steve King, Kris Kobach, and Russell Pearce opposed the bill because of these concessions. Yet it’s a safe bet that’s not why Boehner blocked it.

The only immigration bill Boehner allowed on the floor during the 112th Congress was one that would have replaced the Diversity Lottery with STEM Visas. And this was really an unimportant bill as it did not change overall levels of immigration. The Democrats blocked it anyway.[ Bill to overhaul visa system fails in House; 30 Democrats defect, By Pete Kasperowicz, The Hill, September 20, 2012.]

It’s important to note that (as is generally true with immigration patriotism) the GOP was here depriving itself of a winning issue. Had Boehner allowed the Legal Workforce Act to prevail in vote on the House floor, and the Democratic Senate blocked it, Romney could have used E-Verify as a campaign issue. Instead, absurdly, after Romney lost the election, the conventional wisdom quickly became that his “Self Deport” comment—an elliptical allusion to the effects of E-Verify among other enforcement policies—cost the GOP the Hispanic vote.

while I believe it’s important for us to secure our borders and to enforce our laws, I think a comprehensive approach is long overdue, and I’m confident that the president, myself, others, can find the common ground to take care of this issue once and for all.

Immediately after the Senate passed the Schumer-Rubio Gang Of Eight Amnesty/ Immigration Surge bill, Boehner said the house “House must act on this,” while offering only small quibbles [Boehner: House 'must act' on immigration, by Russell Berman, The Hill, May 16, 2013].

Yet as the grassroots pressure against Amnesty spread to his own caucus, Boehner backed off. Within a week he said that the House was still “committed to fixing our broken immigration system,” but would “not simply take up and accept the bill that is emerging in the Senate if it passes.” [Boehner: House won't be stampeded on immigration, by Russell Berman and Mike Lillis, The Hill, May 23, 2013]

For the rest of 113th Congress, Boehner simply went back and forth, making noises in support of Amnesty, while never actually letting the bill on the floor—especially when his caucus threatened to take him down. Here is a timeline of headlines showing this pattern:

Was Boehner was ever serious about passing Amnesty/ Immigration Surge? I just don’t know. Immigration patriots are so used to politicians talking tough on immigration without intending to follow through that they often never consider that some politicians may pretend to support Amnesty while hoping never to deal with it. Boehner may have given lip service to Amnesty for the big donors, while never intending to fall on his sword to appease them.

When Boehner first embraced Amnesty he told Republicans behind closed doors that it was “time to deal" with immigration—as if it was an issue they just needed to “get behind” them. After the GOP won big in 2014 largely because of opposition to Obama’s immigration policies, Boehner said that “It is time for the Congress of the United States to deal with a very difficult issue in our society. This immigration issue has become a political football over the last ten years or more. It is just time to deal with it.” However, he warned that if Obama’ enacted Amnesty by executive order, he would “poison the well.” [Boehner Wants Immigration Reform, by Terrence Jeffrey, CNS News, November 6, 2014]

Thus Obama’s Executive Amnesty ultimately gave Boehner an out. He could attack the President on procedure, without actually coming out against the policy, claiming "This is not about, actually, the issue of immigration. . . . It's about the president acting lawlessly." [Boehner: DHS funding fight about overreach, not immigration, Washington Post, January 13, 2015]

Boehner pledged to fight Executive Amnesty by restricting it in the DHS funding bill, but he predictably caved. He said that he was “as outraged and frustrated as you at the lawless and unconstitutional actions of this president," but he could not allow any DHS funding to lapse. [House votes on DHS funding bill, Politico, March 3, 2015]

Boehner did not even include immigration as part of his lawsuit against the President’s executive actions—much less consider more radical options like impeachment.

When the Fifth Circuit enjoined the Amnesty, Boehner no doubt felt like he could completely ignore the issue. Yet if the Donald Trump surge shows anything, it’s that this issue will not go away—and that if someone is willing to fight on the issue, the GOP base will rally to them.

The GOP Establishment’s failure to take Trump down over his past support for abortion or a single payer health plan, show that actual GOP voters do not care as much about these issues as Conservatism Inc. Boehner was willing to shut down the government to defund Obamacare—though he of course eventually caved—and voted to overturn it over fifty times. Now he is widely understood to be resigning to avoid a fight over defunding Planned Parenthood.

I shed no tears for Boehner. But the circumstances of his fall show that the Congressional GOP is still more focused on economic and social issues than the existential threat that immigration poses to the country—and, incidentally, the party.