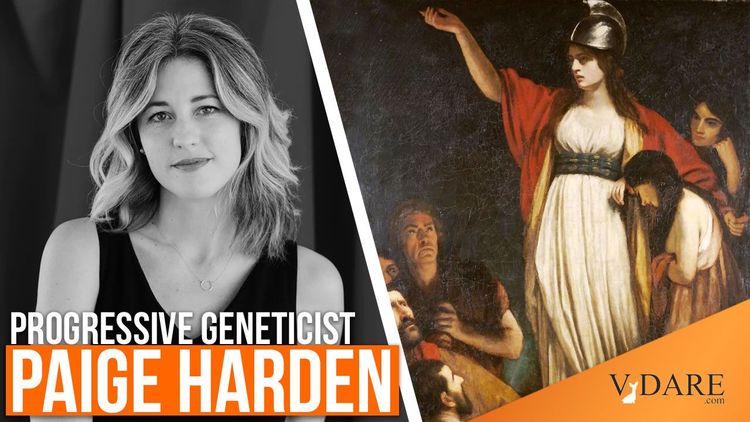 See also: Leftist Paige Harden's Genetics: Taking the Fun Out of Being "Progressive"

I have written before about the concept of the “Bravery Signaler.” In our increasingly authoritarian and anti-science world, “Bravery Signalers” occupy a very specific—and financially profitable—niche. They question Woke dogmas—such as that genetics is irrelevant—but they don’t go “too far.” They are careful to ignore, or fallaciously critique, research which is simply too “out there” for “respectable” people. Thus they get all the benefits of being “brave” and “edgy,” yet they won’t quite get “canceled.” They’ll receive nasty reactions from Leftist anti-scientists, but these won’t be extreme enough to be career-ending. A recent article in The New Yorker [Can Progressives Be Convinced That Genetics Matters? by Gideon Lewis-Kraus, September 6, 2021], reports that what might be called the “Boadicea of Bravery-Signaling” has emerged. Her name: Dr. Kathryn Paige Harden.

The tediously lengthy article sets out how Paige, now a social psychologist at the University of Texas at Austin, grew up in a conservative Christian home and was educated at conservative colleges, at her parents’ insistence, before going to the University of Virginia, where her PhD was supervised by Jewish Leftist geneticist Eric Turkheimer. In 2017, Harden joined Turkheimer and social psychologist Richard E. Nisbett in co-authoring a savagely-headlined Vox article that purported to refute The Bell Curve’s arguments that race and class differences in socioeconomic outcomes in the US are likely to be significantly genetic. (She later distanced herself from what Steve Sailer has called “Turkheimer’s but-is-it-good-for-the-Jews extremism.”)

The New Yorker paints Harden as something of “Head Girl” type, a term coined by British psychologist Bruce Charlton: the chief prefect at British girls’ schools who is intelligent, hard-working, popular, and who diligently works for socially acceptable ends [The Head Girl Syndrome—the Opposite of a Creative Genius, by Bruce Charlton, Intelligence, Personality and Genius, July 25, 2013]. Except, Harden has a bit of an edge to her; she’s prepared to be a bit “controversial.”

Her “controversy” is that she correctly argues that genetics is very important to understanding differences between people, as twin and twin adoption studies have demonstrated. More recently, with the sequencing of the human genome, it has been shown that polygenic scores—your possession of particular genes—impact socioeconomic status, even when controlling for childhood socioeconomic status. This fact is taboo among Leftists and thus among many academics. As The New Yorker reports, they insist that it must be pseudo-science and compare Harden to “Holocaust deniers” and to “Climate Change Skeptics.”

She was told that “Enough is enough” and that it was “dangerous” to pursue her Neo-Bell Curve research. An academic award Harden was to receive was overturned because of her research. Indeed: “On Twitter, she has been caricatured as a kind of ditzy bourgeois dilettante who gives succor to the viciousness of the alt-right.” Fake Paige Harden Twitter accounts include:

“Dr. Harden, Social Justice Through Eugenics!” and the bio “Not a determinist, but yes, genes cause everything. I just want to breed more Hilary Clinton’s for higher quality future people.” One tweet read, “In This House We Believe, Science is Real, Womens Rights are Human Rights, Black Lives Matter, News Isnt Fake, Some Kids Have Dumb-Dumb Genes!!!”

So Harden has definitely received unpleasantness due to her honesty. It seems to be affecting her: she claims to have limited her Twitter time (and she has blocked VDARE.com, which has never tweeted at her or interacted  with her on Twitter in any way).

But the glowing The New Yorker piece shows that her intellectual honesty has limits.

Insisting she is passionately concerned with “social justice,” Harden argues, in her book The Genetic Lottery, which The New Yorker piece is effectively written to plug:

Genetic differences between us matter for our lives. They cause differences in things we care about. Building a commitment to egalitarianism on our genetic uniformity is building a house on sand.

This may seem acceptable. But the piece reveals many other statements by her that cannot be accepted and reveal her to be yet another “Bravery Signaler”—a Jordan Peterson in a skirt. Her stance is paraphrased thus in The New Yorker:

The behavior geneticist Kathryn Paige Harden is waging a two-front campaign: on her left are those who assume that genes are irrelevant, on her right those who insist that they’re everything.

This is nonsense. All traits of relevance to psychology are partly genetic and partly environmental—and The Bell Curve has always acknowledged this. Harden must know that nobody, least of all the painfully moderate Charles Murray, is arguing that genes are “everything.” It’s just a way of making those who disagree with her appear “extreme” and, basically, “wicked”—rendering her more palatable by comparison.

To avoid the “racism” allegation, Harden insists—as she did in Vox—that any race differences in intelligence or in accomplishment are surely explicable in environmental terms. She must know this is nonsense, as evidenced by the evasive response and manipulative appeal to emotion that she displayed when she was picked up on it, quoted in the New Yorker.

“There is a middle ground between ‘let’s never talk about genes and pretend cognitive ability doesn’t exist’ and ‘let’s just ask some questions that pander to a virulent on-line community populated by racists with swastikas in their Twitter bios.’”

Look at it this way: If race differences in cognitive ability were mainly for genetic reasons, then the following would be true:

And in fact all of these things are true—as another recent book, Making Sense of Race, by Edward Dutton, has demonstrated.

Paige, then, is a confirmed “Bravery Signaler,” promoted by The New Yorker because she is female (yet a successful scientist), relatively young (her age is discreetly withheld on her Wikipedia entry), because she seems to dance, in a quirky way, to the Social Justice tune—and because she appears not to pose a fundamental threat.

Will Leftists ever accept the importance of genetics? Richard Lynn has noted in his book, Eugenics: A Reassessment (2001), that they certainly used to accept it. Before World War II, “eugenics”—the improvement humanity’s genetic stock— was a mainly Leftist pursuit: professors of eugenics Karl Pearson and J.B.S. Haldane were committed socialists. Haldane wrote in The Daily Worker in 1949 that: “The dogma of human equality is no part of Communism . . . ‘from each according to his ability, to each according to his needs’ would be nonsense if abilities were equal” [Eugenics and the Left, by Diane Paul, Journal of the History of Ideas, 1984].

As Lynn notes, socialists H.G. Wells, Bertrand Russell and George Bernard Shaw were all avidly committed to eugenics. It was conservatives who criticized it, maintaining that it turned humans into animals and ignored the sanctity of human life.

This has now been turned on its head, with Leftists arguing that each human life is somehow “special,” “unique” and deserving of “human rights” and that, as we are all “equal,” eugenics is anathema because it implies that different humans are of different “value.”

The reasons for this are very deep. My view: Kathryn Paige Harden will fail in her attempt to strike a balance between post-World War II Leftist fanaticism and scientific reality. Boadicea, after all, was defeated amid appalling slaughter and her ultimate fate is unknown.

On the plus side, the promotion of Harden’s book might lead to some readers going “down the rabbit hole” and finding the scientists who are not “Bravery Signalers” and who are prepared, based on reason and empirical evidence, fearlessly to tell the truth.