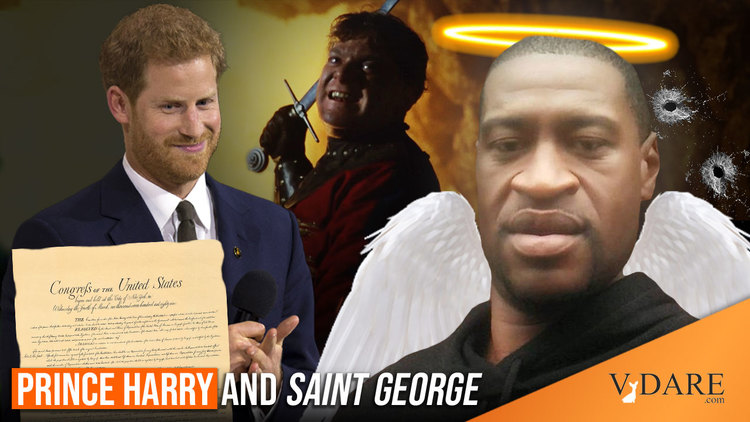 JOHN DERBYSHIRE: This Anti-White St. George Floyd Cult Is A Disgrace To America

Earlier by John Derbyshire (June 6, 2020) I Will Not Genuflect To This Church Of Antiracism

If you know any Shakespeare at all, you know the speech that Henry the Fifth gave to rally his troops at the battle of Agincourt. It ends with the words: "Cry God for Harry, England, and Saint George!" There's another Harry in the British Royal Family today, but he's not Agincourt material. If we don't have much of a Harry, though, we at least have a Saint George—the Holy Blessed Martyr George Floyd, who ascended to glory one year ago this last week, to the lamentations of his nation and the enrichment of his baby mommas. But if Harry Windsor moves me to sadness, George Floyd excites only disgust.

What a disgrace to our nation that this brutish, antisocial misfit has been elevated to our pantheon of heroes, canonized in the sick cult of anti-White victimology that dominates our culture.

Say what you like about Harry Windsor, he never stuck a pistol in a woman's belly prior to robbing her house. (Although, to be perfectly fair to Saint George, there's nothing in the court documents about the woman being pregnant, as is sometimes said. So that’s OK then. [Background Check: Investigating George Floyd’s Criminal Record, by Jessica Lee, Snopes, June 12, 2020, Updated February 24, 2021])

Last Tuesday's feast day of Saint George did, however, at least offer us one of the most hilarious episodes of irony in the annals of video recording. I'm referring of course to those precious clips of TV reporters diving for cover from gunfire in George Floyd Square.

A series of loud noises that sounded like at least 10 gunshots broke the quiet Tuesday morning at George Floyd Square on the anniversary of his killing. The police later said one person was being treated for a gunshot wound at a nearby hospital. https://t.co/2OuNHSgoFd pic.twitter.com/ieWcsytljQ

I enjoyed them every bit as much as you did. So did innumerable others, to judge from the YouTube comment threads.

Here's one of those clips from ABC News. The studio presenter here is Diane Macedo[Tweet her] a white lady. She is talking live to a black street reporter, Alex Presha [Tweet him] in George Floyd Square. And in case you don't know, the Square is now part of an autonomous zone, into which police are not allowed.

Macedo: And Alex, we know that the day is full of events to both commemorate what happened and also celebrate George Floyd's life. So what are we expecting both there in Minneapolis and across the country?

Presha: Well, Diane, I think one real powerful moment is, you mentioned, certainly the Floyd family meeting privately with President Biden. Well, right around that time or immediately after, the governor here, Governor Walz, has signed a proclamation urging residents in Minnesota and Minneapolis to observe nine minutes and twenty-nine seconds of silence, representing the nine minutes and twenty-nine seconds that Derek Chauvin knelt on George Floyd's neck, but …

[More gunshots, background voices saying "Go! Go! … Down! Down! … Behind the engine block!"]

Only one person was wounded, as so often happened in black shootings. Needless to say, no arrests have been reported [1 Person Shot Near The Site Of George Floyd's Murder On The Anniversary Of His Death, by  Joe Hernandez, NPR, May 25, 2021].

Minneapolis Police say the individual's wound is believed to be non-life threatening. Witnesses told police a suspect vehicle left the area "at a high rate of speed." https://t.co/ndTmLJxQrR #USRC pic.twitter.com/Qc4eDffuGr

So yes, the folk there in George Floyd Square were indeed celebrating the Blessed Martyr's life in an entirely appropriate fashion.

And yes, just as the street reporter told us there, Saint George's family members, latest winners of the Ghetto Lottery, did indeed meet with Joe Biden at the White House just about at the time their co-ethnics opened fire in George Floyd Square.

We just have to hope the president knew what was going on, and didn't think it was a cabinet meeting.

There was of course a political angle here. There's a new federal bill before Congress, the George Floyd Justice in Policing Act, which will make it the law of the land that if a juiced-up six-foot-six 240-pound black guy doesn't want to submit to being arrested, he durn well doesn't have to.

The bill is currently stalled in the Senate, but the Floyd family members there in the White House Tuesday took the opportunity to promote it to the reporters present.

I haven't checked recently to see what the rates of gun violence, consumption of illegal narcotics, and passing of counterfeit currency are in the bald eagle community. But I promise to do so when time permits.