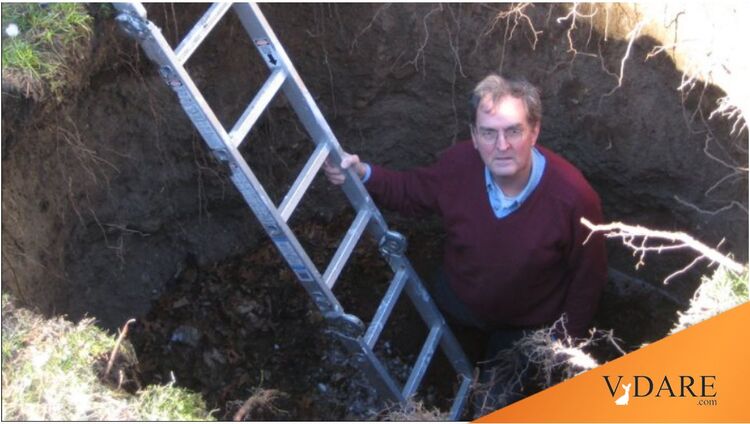 [Peter Brimelow writes: We’re happy to say that despite his chemotherapy, John has been able to write for us again this week. Remember, you can help finance his VDARE.com columns (tax-deductibly!) here. Annoy Elspeth Reeve!]

After the fuss about my April 5 column in Taki's Magazine blew up, I assumed that within a week or two it would all have faded into the Cosmic Microwave Background of stale news, and I'd be able to get on with writing about other things that interest me: Far Eastern affairs, math and the physical sciences, the human sciences, history, religion, politics, literature, and poetry.

No such luck. Once the Lefties have a real live racial heretic in their sights, and understand—as of course they now understand very clearly—that they can use him as a stick with which to beat the race-whipped Respectable Right, with nothing coming back at them from that quarter but squealing, supplicatory protestations of racial orthodoxy, they're going to milk the situation for all it's worth. This show will run and run.

I suppose I only have myself to blame. As a close friend told me: "For goodness' sake, John, in the U.S.A. not even the world's greatest living geneticist can say true facts about race out loud. What chance did you think you had?"

Which is right, of course. Like James Watson and other somewhat-Aspergery types, I fall rather easily into the childish assumption that truth trumps everything, and that statements based on facts, including statistical facts, may fairly be challenged only by a set of facts that better fits the actual world of actual reality, so far as we are able to apprehend that world.

That stuff does happen. It's called "good science." It forms, however, only a minuscule part of human social activity.

Far, far more of our social life consists of polite nothings, convenient falsehoods, calculations of relative status, testing of comfort zones, mutual grooming rituals, angling for favors, hot flushes, raised voices, jabbing fingers, and ad hominem remarks about opponents' habits, appearance, and personal histories, none of which has much to do with coolly testing propositions about the world against empirical evidence. We are, after all, just smart chimps.

My last week's VDARE.com piece on nomenclature therefore got the lefties a-jumping and a-chittering all over again.

To judge from the small amount of this stuff I could be bothered to look at, its principal characteristic was poor reading comprehension. As James Fulford has pointed out, the Elspeth Reeve [Email her/Twitter] who commented on Atlantic Wire got this link confused with this one, apparently not having bothered to click on either, or even to read the imbedding text with any understanding.

Ms. Reeve's incompetence at handling her chosen material is pretty plain. But in other cases it's hard to decide between journalistic slovenliness and malicious misrepresentation.

Here, for example, is something I wrote in my original April 5 TakiMag piece : "Avoid concentrations of blacks not all known to you personally."

Here is how I was quoted on The Blaze by one Erica Ritz[Twitter]: "Avoid concentrations of all blacks not known to you personally."

My default assumption in ambiguous cases like that is stupidity. It's a particular and peculiar kind of stupidity, though: a willed self-enstupidation that all liberals engage in when talking about race.

(I am indebted to Fred Reed for the beautiful word "enstupidation." And since I have brought up Fred's name, I may as well mention that he was for some years a crime reporter in Washington, D.C., riding in patrol cars with cops through the ghetto. Fred's race realism makes me look like Alex Pareene.)

Heaven forfend that when speaking of race, you should show any awareness of the difference between English words like "some," "many," and "all." Heaven doubly forfend that you betray any understanding of esoteric statistical notions like "average."

Hence comments like this one, from a thread on Huffington Post. The commenter carefully typed out 91 words about her brilliant black nephew, words rendered completely null and void by my phrase "in the statistical generality," which she had actually quoted!

(For a similar case, see here. A very high proportion of the negative comments on my pieces, in fact, consist of some commenter pointing out the existence of a brilliant or admirable black person known to them. Not only would I never deny the existence of such persons, I explicitly acknowledged it in my original April 5 piece: "There are black geniuses and black morons. There are black saints and black psychopaths." Taste the liberal self-enstupidation!)

I fear, in fact, that statistics is becoming a dangerous subject, like history in a communist country.

(Or, come to think of it, like statistics in a communist country: When the results of the 1937 Soviet census were displeasing to Stalin, he had several of the senior statisticians sent to the Gulag. The Left, the Left! They are always the same!—always and everywhere.)

If knowing the meaning of "average" marks you as a person of interest to the Thought Police, what kind of social peril are you in if you know about variance and kurtosis?  Kill the Stinking Ninth!

The main current of thought here, in fact, if you read many of these comment threads, is anti-intellectual, sometimes explicitly so. You must not think about this stuff. Just repeat the approved phrases. That's the plain message.

As a person who rather likes thinking, books, reasoned argument, and open debate, I cannot help but see this as an appeal to barbarism—as, of course, are the many calls for physical violence against my person.  But this is not news:  the Left has always been the party of barbarism, of "'Shut up,' he explained," and "We know where you live."

What generated the most shrieking and swooning from the guardians of racial orthodoxy in this cycle was this remark in my VDARE.com column:

"White supremacy, in the sense of a society in which key decisions are made by white Europeans, is one of the better arrangements History has come up with."

On the John Locke principle, though—i.e. "I have always thought the actions of men the best interpreters of their thoughts"—the overwhelming majority of black Americans agree with me, and always have. From very early in the Republic, free blacks not only had the opportunity to escape from white supremacy, they were encouraged to do so by abolitionists.

The gentle Harriet Beecher Stowe, for example, closed out Uncle Tom's Cabin with an appeal, grounded in Christian charity, for freed blacks to be educated and trained…so that they would be better able to survive in Liberia!

Let the church of the north receive these poor sufferers in the spirit of Christ; receive them to the educating advantages of Christian republican society and schools, until they have attained to somewhat of a moral and intellectual maturity, and then assist them in their passage to those shores, where they may put in practice the lessons they have learned in America.[Concluding Remarks, Chapter 45]

Abraham Lincoln was keen to help blacks escape white supremacy, too. In August 1862 he invited a delegation of free blacks to the White House…in order to urge them to leave America.

(Lincoln's entire speech is here. I note in passing that the 150th anniversary of it is just a few weeks away. I await with keen interest the many articles that will no doubt appear in the Main Stream Media to commemorate the occasion.)

But with all this opportunity and encouragement, how many freed blacks actually chose to escape from under the iron heel of white supremacy? Most sources give 15,000-20,000—out of a Civil War-era black population of around four million. That’s less than half of one percent. Ninety-nine point five something percent preferred white supremacy. That's an even bigger proportion than voted for Barack Obama in 2008.

"I have always thought the actions of men the best interpreters of their thoughts."

Apply John Locke's apothegm to the sloppy, dishonest, thuggish, anti-intellectual actions of the guardians of racial orthodoxy in today’s America, and you get a pretty good insight into their thoughts.

John Derbyshire [email him] writes an incredible amount on all sorts of subjects for all kinds of outlets. (This no longer includes National Review, whose editors had some kind of tantrum and fired him.  ) He is the author of We Are Doomed: Reclaiming Conservative Pessimism  and several other books.