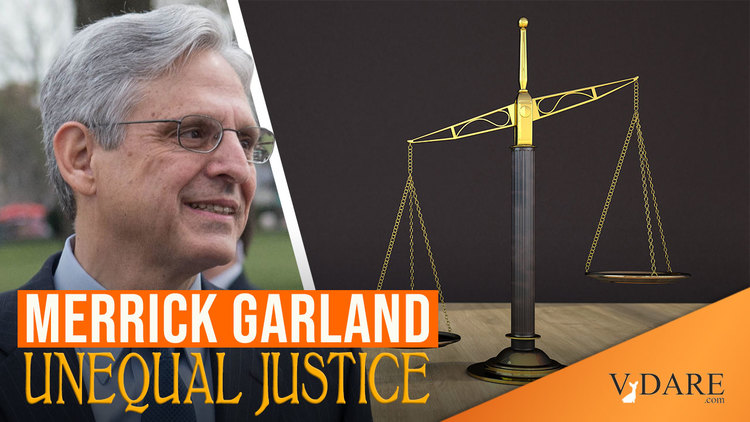 Of the sixteen persons nominated for a cabinet position, as listed in the January 23rd issue of The Economist [After the chaos of the Trump era, what can Joe Biden hope to achieve?], nine have now been confirmed by the U.S. Senate and have assumed office. So we are better than halfway through the confirmation process. 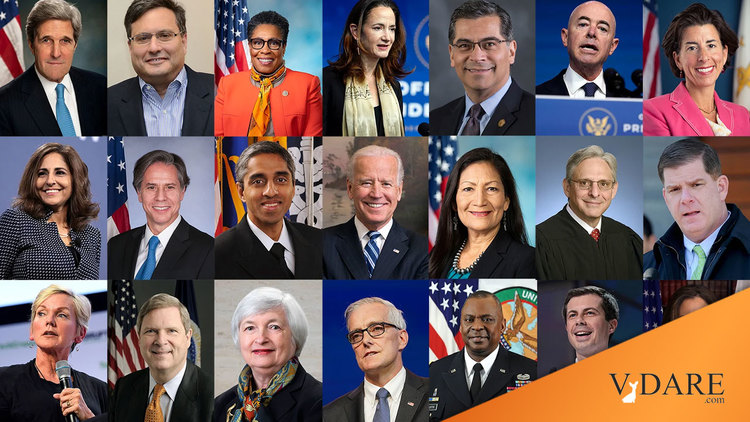 (Am I still allowed to say "Founding Fathers"? "Founding persons," whatever.)

That is the working definition of the word "diversity" in our benighted age: no non-Hispanic white Protestant heterosexual males! That's true diversity!

Only one of the sixteen is a white male Protestant: Peter Buttigieg, the Transportation Secretary; and as an Episcopalian, his Protestantism is borderline. I used to be an Episcopalian, and I recall that bit in the liturgy where we prayed for the Holy Catholic and Apostolic Church.

Confessionwise I count eight Roman Catholics, four Jews, two Protestants, one Hindu, and one unknown. By sex they break down as ten guys and six gals. Cutting by race and ethnicity: ten white, three black or blackish, three Hispanic. By sexual preference: fourteen apparently heterosexual, one homosexual, one unknown.

Concerning the confirmation process itself: there is a customary understanding—a sensible one, I think—that a new President is entitled to his cabinet picks, and that the Senators should practice forbearance in challenging them, with due allowance for a bit of televised grandstanding on particular issues. Given that, and the present balance of parties in the Senate, these confirmation hearings are somewhat of a formality.

They can be instructive, though. Instruction this week came from Merrick Garland, picked by Biden—or whoever pulls Biden's strings—to head the Justice Department.

Justice in the U.S.A. is in serious trouble. It has been politicized. Our Ruling Class has been seized by an ideology: the one loosely called "Wokeness," although as a longtime fan of Professor Paul Gottfried, I prefer "Cultural Marxism." This ideology has many facets, but its most central characteristics are 1) deep hostility to the founding stock of the U.S.A.—as illustrated by the statistics I just gave you on Biden's cabinet picks—and 2) fierce intolerance of all dissent.

In the matter of justice, the effect of that ideology has been to give us a two-tiered system, a shameful double standard. Anarchist mobs who burned, looted, and murdered their way through our cities last year have been smiled on by the courts. The motley protestors who entered the Capitol on January 6th, by contrast, are being hunted down and crushed like bugs: no bail, no celebrity support, no GoFundMe pages, no allowance for personal circumstances.

As for Portland, Oregon, charges were dropped for 90 percent of rioters arrested in September's anti-cop violence. One 23-year-old charged with attempted murder, arson, possession of a destructive device, and rioting was released on a $1,000 bond.

Seattle was as bad. Mayor Jenny Durkan lauded the lawlessness that would lead to the fatal shooting of 19-year-old Horace Lorenzo Anderson in July as a "summer of love."

These were the deadly protests Biden benignly described as "peaceful" and [Kamala] Harris said are "not going to stop … and they should not."

Yet after a few hours of madness one day in January, every Trump supporter in the country is to be treated as if they flew a plane into the World Trade Center. They all are under suspicion for what Biden said last week was "the greatest threat … in America: domestic terror."

Plainly—it could not be more plain—there is one system of justice for persons who hold approved opinions, another for dissidents.

Anglo-Saxon jurisprudence has of course always allowed intent as a factor in the dispensing of justice: an unintended homicide is treated differently from an intended one.

But that principle has now been distorted to:

This gross and obvious double standard is Third World jurisprudence. It's how things are done in Congo, Uzbekistan, China, or Guatemala.

No American jurist with any respect for our nation's history or constitution should tolerate it.

But Merrick Garland doesn't just tolerate it, he approves it. Asked about last year's attempt to burn down a federal courthouse in Portland, Oregon, Garland mumbled that no, that wasn't domestic terrorism if it happened at night when no proceedings were going on.

Garland's responses to similar questions were likewise tilted towards the anarchist mobs rioting in support of Ruling Class ideology and against citizens hostile to that ideology.

It's as clear as can be that, as Attorney General Garland, won't challenge the double standard, much less dismantle it; he will bolster it.

Our one crumb of consolation here: at least this stuttering doofus is not on the U.S. Supreme Court (where most of our significant legislating actually gets done nowadays). Barack Obama, in his last year in office, proposed Garland as a replacement for—Heaven help us!—the late, brilliant, patriotic Justice Antonin Scalia. (Speaking of diversity, Garland’s elevation would have meant that four of the nine Justices were Jewish.)

In that instance, at least, Heaven did help us. The congressional Republican Party, in a rare display of spine, ran out the clock on Garland's nomination.

That won't happen with this nomination. Garland will be approved as A-G. He has already told us that his priority will be hunting down and prosecuting patriot dissidents, while smiling benignly on the Antifa and Black Lives Matter enforcers of Regime ideology.

We shall soon see the double judicial standard in courtroom action. The state trial of police officer Derek Chauvin seems now definitely to be on for early March [Court: Derek Chauvin’s Trial Set For March Will Be Held In Person, CBS Minnesota, February 3, 2021].

Last time I reported on this there had been some dithering by Minnesota's black Muslim communist Attorney General Keith Ellison. Should Chauvin and the three other officers present at George Floyd's arrest be tried all together? Should they be tried while the Covid pandemic is waxing strong, or in the summer, when presumably it will have abated?

The decision has been that Officer Chauvin will be tried next month, the other officers in August.

As I told you a month ago, and as Steve Sailer has just been telling us again, the barbarous and unconstitutional practice of double jeopardy will be in play. If, by some mischance, People's Commissar Ellison can't rig up a jury conviction of Officer Chauvin on the charges of homicide—or, on the James Fields precedent, likely even if he can—the feds will step in to prosecute Officer Chauvin for homicide-while-thinking-bad-thoughts.

Attorney General Merrick Garland will be just fine with this. He will throw all the resources of the Justice Department at Officer Chauvin, and then all over again in August at the other three officers.

If you're thinking that it's hard to imagine a creature as limp as Garland throwing anything at anyone, I'm inclined to agree; but in this case he will be energetically assisted by his Assistant A-G for the Civil Rights Division, fanatical white-hating black supremacist Kristen Clarke.

Emboldened by the destruction of Officer Chauvin, the feds will then turn their attention to the arrested January 6th protestors, with similar malice aforethought. And after that the FBI—which is a tool of the Justice Department, remember—will go scouring the land for persons who might in some way have encouraged or supported those "domestic terrorists."

The next year or so will see one of those descents into authoritarian savagery that have blotted history so often before, in different times and places: the witch-hunting panics of early-modern Europe, the terror phase of the French Revolution, Stalin's purges. I doubt it will go as far as public executions, or dissidents being shot in FBI dungeons, but many lives will be destroyed.

Through it all Merrick Garland will be smiling vacantly or mumbling CultMarx platitudes, and Kristen Clarke will be cackling gleefully.

For our liberties and for our traditional Anglo-Saxon jurisprudence—what's left of it—this will be a long four years.

Meanwhile, quietly, hesitantly, cautiously in the background, resistance will be rising.