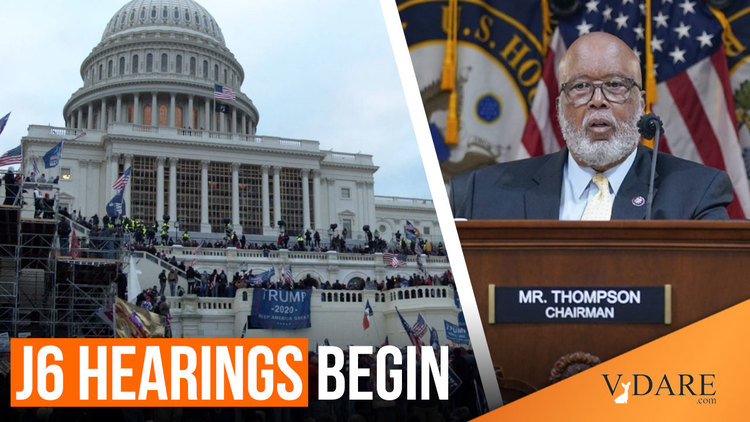 See also: CAPITOL "INSURRECTION" HOAX: How Our Lying Press Would Have Spun Jan 6 Protest If Trump Were A Democrat [VIDEO]

Top of the news today, at any rate in the Regime Media, is the first of the six (6) congressional hearings we've been promised on last year's Capitol Hill protests against the 2020 election. 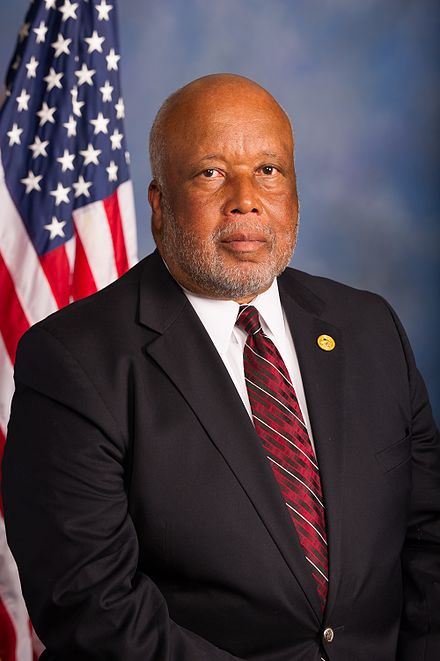 The chairman of this event is some congresscritter named Bennie Thompson, of whom I had never heard until yesterday. Representative Thompson is black, as he was at pains to make clear for those people watching who may have failed to notice the fact. Edited quote:

Thanks to everyone watching tonight for sharing part of your evening, to learn about the facts and causes of the events leading up to and including the violent attack on January 6th, 2021 … on our democracy, electoral system, and country.

I am Bennie Thompson, Chairman of the January 6th, 2021 Committee. I was born, raised and still live in Bolton, Mississippi, a town with a population of 521, which is midway between Jackson and Vicksburg, MS, and the Mississippi River.

I am from a part of the country where people justified the actions of slavery, the Ku Klux Klan and lynching. I'm reminded of that dark history as I hear voices today try and justify the actions of the insurrectionists on January 6th, 2021.

Ah, the romance of American blackness! Thirty seconds into the committee hearings and we're already deep into black narcissism. I didn't stick around for the obligatory mention of Emmett Till.

Do black Americans—the pampered, privileged pets of our society—do they really not have any idea how much so many of us resent their endless whining?

We have twisted and deformed our entire society—our justice system, our educational system—in efforts to appease them, but they only ask for more.

There is an instance of that deformation of our society staring right back at you, Mr. Chairman: the January 6 killing of unarmed white female protestor Ashli Babbitt by armed black male Capitol Police Lt. Michael Byrd. After a perfunctory inquiry, Lt. Byrd was cleared of any wrongdoing.

I know it's trite to say it, Mr. Chairman, but do you really believe that a white male cop who shot an unarmed black woman under any circumstances whatsoever would get away without a word of reprimand?

You believe that? Really?

Now tell me what federal statistics show about black assaults on whites. A respectable commentator has written the following:

In the U.S., blacks commit the vast share of the interracial violence between blacks and whites that is not classified as a hate crime: 88 percent [Using Tragedy for Racial Propaganda, by Heather Mac Donald, City Journal, May 23, 2022].

Is that figure wrong, Mr. Chairman? As a federal legislator, do you have federal statistics that contradict it?

Accumulated over the 157 years since the Civil War ended, what are the numbers for (a) blacks killed by whites using any method, including lynching, and (b) whites killed by blacks? Do you have an estimate for those numbers, Mr. Chairman?

I'm wasting my breath, of course. This is the United States of Black Racial Grievance. The whining, the narcissism, the twisting and deforming: these are America’s reason for existing. Without them we would drift aimlessly, without purpose or goal.

And this committee and its so-called "investigation" is, as most of us understand, nothing to do with justice, constitutionality, or national security. It is the opening salvo in a crudely political campaign to prevent Donald J. Trump from running for president in 2024.

The hatred our Ruling Class has for Trump is manifest. It still, after six years, burns fierce and bright. It's really an extraordinary thing.

I can remember the hatred those same people—well, their 1970s equivalents—had for Richard Nixon, who was a much better president—and a much better man—than Trump.

One of my workmates at Savin Business Machines in the mid-1970s was proud owner of some rolls of toilet paper with Nixon's portrait on each sheet. Even at the time, when I was still a liberal twenty-something, I thought that was a bit over the top. Or under the bottom, perhaps…

The Regime's hatred of Trump is far beyond that. It's really a wonder to behold, and drives much of our national policy.

And this hatred, this Trump Derangement Syndrome, is just the emblem, the outward symbol, of their hatred for us, normal white Americans.

Sixty-three million of us voted for Trump in 2016 because, I think they know, we were fed up with having their anti-white, anti-American ideology rammed down our throats.

Trump was an outsider, not one of them, not a member of the Uniparty establishment. That's why we liked him; that's why they hate him.

I hope for a Trumpish victory in 2024. Here's my advice to the victor: Drain that swamp!

In particular, end the naked politicization of federal law enforcement. There need to be mass purges, mass firings, from the Departments of Justice, Homeland Security, and Defense.

I'm not sure how deep the purges would need to go. At the bottom levels—border security officers in Homeland Security, for example—there must be many federal employees who'd be glad to do their jobs if they were allowed to. Perhaps the same is even true of the FBI.

In the upper ranks, though, where the decisions are made to hunt down and persecute dissidents and turn blind eyes to real crime, I want to see mass layoffs.

I'll even pay their damned inflated federal pensions; just get them out of Washington, D.C.

For a really radical approach, consider just shutting down departments and agencies altogether. America got along for 157 years without an FBI; do we really need one? We managed for two hundred and twenty-seven years without a Department of Homeland Security; how on earth did we cope?

And if you're going to be that radical, go further and move federal departments out of Washington, D.C. The city is a hive of intrigue. What would be wrong with the Justice Department being based in Idaho, Defense in Kansas, Treasury in Arkansas, the State Department in…oh, I don't know…Alaska?

Let's have some real reform: reform in the direction of more of our traditional liberties, more local control of our affairs, less power to the Administrative State. The course we are currently on leads to despotism and despair. Let's change course.

I'm sorry: the sheer volume of dishonesty and hypocrisy, of disregard for truth and facts, gets me sputtering. We're really getting up to North Korean levels of Establishment lying.

Although unlike North Korea, we still have a few news outlets that resist posting regime propaganda, for which we should be grateful.

The front page of my New York Post this morning had no mention of the committee hearings. It was entirely given over to the story about a 15-year-old girl (race unspecified) sitting at home doing her homework when she was hit by a stray bullet—although not fatally, thank goodness. 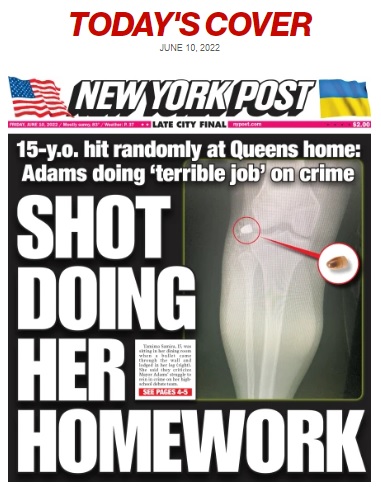 No doubt that bullet was fired by a Klansman—just another incident in the "dark history" that Chairman Thompson reminded us of.

The New York Post print edition did have one page of somewhat skeptical coverage of the committee hearings—page 7 (considerably enlarged and slanted in the online version)—but nothing in the op-ed pages, no editorials. For this relief, much thanks.

Fox News was the one cable channel that did not snap to attention and yell "Sir, yes Sir!" when our rulers told them to give full coverage, Fox hit back hard, with an exceptionally vigorous and well-researched edition of Tucker Carlson's show, uninterrupted by commercials.

(I hope sales of MyPillow and Relief Factor were not too badly impacted.)

So yes: for a little longer at any rate we shall be free to scoff at the Regime lies. Let's take comfort in that.

Meanwhile I feel bound to say that, while I think it's deplorable for our national legislature to sink to these depths in order to prevent one particular candidate running for office in 2024, I wouldn't mind much if they were to succeed.

Personally, I don't want Trump running in 2024. He'd be 78 on Election Day and that's too old. Enough with these geezers. I'm in the same zone myself, and I am all too well aware of how my energy level—my willingness and ability to get things done—has faded. ["Energy in the Executive is a leading character in the definition of good government," wrote Alexander Hamilton in Federalist No. 10.] We'd get more sense from a President Trump than we're getting from Joe Biden—how could we get less? —but we wouldn't be getting any more energy.

And his age aside, I just don't think Trump's a good candidate. Sure, he had some positive accomplishments, on federal regulations, for example, and energy independence, and telling foreigners to keep out of our business.

There was too much I find hard to forgive, though: his failure to exercise his will over Congress in those two years that his party controlled both houses, the lack of any urgency in building the Border Wall he'd promised, his shameful treatment of Jeff Sessions (and Ann Coulter), his indulgence of the slimy subversive Jared Kushner…too many negatives.

But yeah, sure: if he is the GOP candidate in 2024, I'll clench my teeth and vote for him, just to stick a finger in the Ruling Class' collective eye.