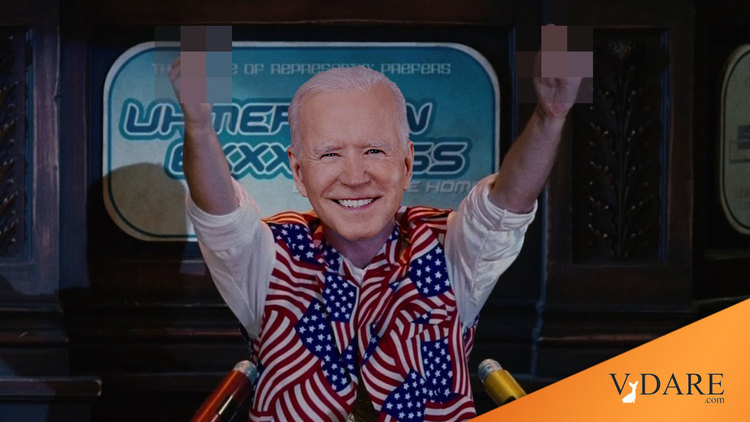 I find it harder and harder to watch passing events without Mike Judge's 2006 movie Idiocracy coming to mind.

That's especially the case with politics. Politicians have always said dumb things, of course; but in between the dumb things they generally, once in a while, said sensible, interesting, or thought-provoking things, too—occasionally even memorable things. Today it seems to be all dumb, wall-to-wall dumb, sea-to-shining-sea stupidity.

I listened to all nineteen minutes of it, with the idea to do a thorough tossing and goring. However, Pat Buchanan has beat me to it. He wrote:

Republicans seek to deny "full and free and fair elections" and are engaged in "the most un-American thing that any of us can imagine, the most undemocratic, the most unpatriotic."

When Sen. Joseph McCarthy challenged the patriotism of Truman Democrats in such terms in the 1950s, he was censured by the Senate.

Is Biden really saying that minor alterations in election laws, all of which would have to pass muster with federal courts and the Supreme Court, represent an existential threat to our republic?

This is beyond hyperbole. It is ridiculous. It is absurd.

Such hype is a measure of just how far out of touch with the real world the rhetoric of our reigning elites has drifted.

I'm not going to compete with the master. I'll just throw out a few random comments.

In fact, as even some institutional never-Trump Republicans were moved to point out, that is a textbook instance of hyperbole [Sorry, Mr. President: The ‘fight’ for voter rights is nothing like the Civil War, by Rich Lowry, NY Post, July 16, 2021].

In saying, "That's not hyperbole," the President said a really dumb, stupid thing, inviting mockery from any literate person.

Twenty-twenty election … It's not hyperbole to say the most examined and fullest expression of the will of the people in the history of this nation.

Well, again, it is hyperbole to say that. Last November's election was a ramshackle affair, mainly because of disruptions due to the covid pandemic. We've had much better-run and more credible elections. Does anyone not think so?

That bit of the speech doesn't attain quite the lightless depths of dumbassery as the previous one, but it's pretty darn stupid.

He said, for example, that women were denied the vote until the Nineteenth Amendment in 1920.

Not true: women got the vote in Wyoming fifty-one years before that, in 1869, closely followed by Utah, then Colorado and Idaho. Every smart high-schooler knows this stuff.

We're going to face a new test in 2022, a new wave of unprecedented voter suppression and raw and sustained election subversion …

Translation: We in the Regime are really, really worried that voters will vote the wrong way next year.

We all know what this is about. It's not about 2022 or 2020, it's about 2016. That election was a terrific psychic shock to the Ruling Class, a nine on the political Richter Scale.

The Regime was smug; they were confident; they had one of their own on the Democratic ticket, a reliable bot for the academic-military-technocratic-intelligence-media-financial elites. The 2016 election was lined up nicely, all according to plan…then suddenly, from out of right field, came this wild man, this maverick, destroying all the Ruling Class plans.

Everything out of the Deep State since November 2016—everything from the big federal power centers, the universities and law schools and military staff colleges, the broadsheet newspapers and TV channels, Hollywood and the big internet companies, the FBI and the CIA and the NSA and the so-called Justice Department—everything has been said, done, written and broadcast with the sole aim of making sure that 2016 never happens again.

And that's not hyperbole.