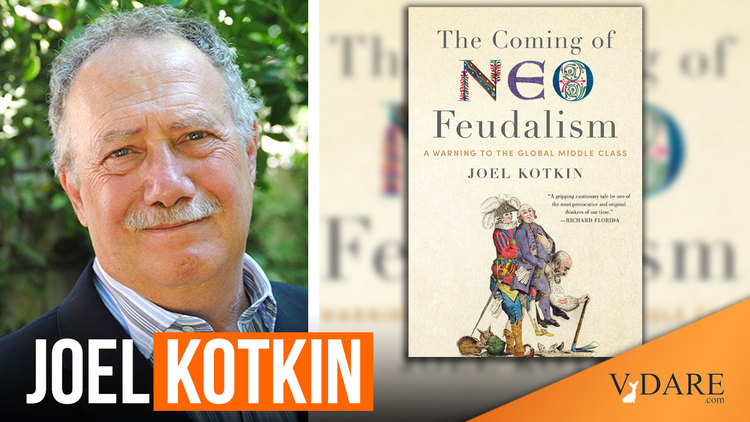 Joel Kotkin is a funny fellow. His review of VDARE.com Editor Peter Brimelow’s 1995 immigration book Alien Nation was a vicious smear, even echoing the common paranoid complaint that Brimelow “repeatedly” referred to his blue-eyed blond baby boy (there was actually only one reference, in the unimpeachable context of the destructive effect of the interaction between non-white immigration and Affirmative Action quotas upon those native-born Americans who are not members of the so-called protected classes). But, as subsequent typically fair-minded VDARE.com references to Kotkin’s work show, it turns out that he shares many of the same concerns.  That’s true for his well-received recent book, The Coming of Neo-Feudalism: A Global Warning to the Middle Class, despite (or perhaps because of) the fact he continues to pull his punches.

Kotkin makes the case that our society is reverting to a feudal state, in which there is a small number of “big winners” who control everything and in which there is no longer an influential middle class. Propertyless “serfs” are also growing as a percentage of the population and there is no longer much social mobility. In other words, society is divided into feudal castes, with the aristocracy in complete power.

The book has been greeted enthusiastically. The magazine Quillette  called it “persuasive” [The Coming of Neo-Feudalism—A Review, by Adam Wakeling, June 11, 2020] while UnHerd’s Ed West claimed to be annoyed that Kotkin had beaten him to writing the book he’d long wanted to write himself [2020 and the coming of neo-feudalism, June 17, 2020].

My view: it’s an example of what has been termed “bravery signalling.” The book is a kind of Academic Establishment safety-valve. It admits what is happening—so that people don’t feel completely lied to—and it asserts that what is happening is bad and should be overturned. But it morally condemns anything which might actually overturn the system, and, in explaining what is taking place, it doesn’t invoke parsimonious explanations if these question the current Woke dogmas. In effect, it very subtly upholds the system, while seeming to oppose it.

Most of the time, there is much to commend in Kotkin’s book. He sets out how, especially over the last fifty years, how the West has moved away from a liberal democracy, with a powerful middle class, back to a form of Feudalism, where society is enormously dominated by a small elite at the very top and in which most of the wealth is concentrated. These people include the technicians who work for the Tech Oligarchs.

This dominance is backed up by what Kotkin calls the “clerisy.” They operate in the same way as the Medieval clergy: they provide ways of legitimating the system.

Kotkin notes, rightly, that this is what Academia has now become. The new feudal overlords are biased towards Leftist crypto-religious ideas—such as obtaining “indulgences” by virtue-signalling about the environment—and their clergy have increasingly taken over universities, motivated by Leftist crypto-religious dogmas rather than by the pursuit of truth.

This clerisy has inculcated the growing graduate class—the “yeomen” of the new feudal system—with the idea that diversity of opinion is bad because it is “repression” in disguise. And they have driven alternative opinions out of the Church.

As in Medieval England, university attendance is now about the credentials to enter a religious system, not about learning and thinking as a good thing in themselves.

Kotkin explains how this change—with every aspect of life concentrated into the hands of a few Tech Oligarchs—has allowed increasing censorship and conformity, so that the new feudal system can be upheld. It has been paralleled by decreasing social mobility, just as he claims there was little social mobility under feudalism.

What has happened is clearly a bad thing, Kotkin argues. But just as there were occasional revolts against feudalism by the serfs—who parallel the working class—there are revolts by the modern serfs against immigration, as this reduces their wages and creates a cheap workforce for the elite. This takes the form of populism in Europe, Brexit, and of course Trump.

However, Kotkin condemns these revolts as “racist” and “odious.” He insists ethno-nationalism as inconsistent with democracy and a large middle class—despite evidence that democracy is based around trust, which is higher between co-ethnics, and that democracies collapse in multi-ethnic societies, in part due to low trust, as highlighted by Tatu Vanhanen in his 2012 book Ethnic Conflicts.

Indeed, Kotkin seems systematically to overlook crucial counterarguments to his thesis. Thus he suggests that, if we adopt the values of the Open Society, such as liberal “Open Citizenship”—which were supposedly behind our huge rise in living standards in the first place—then we can return to a middle-class democracy. But this completely ignores the evidence that a society that is too “open” will tend to Balkanize, lose its sense of social trust, and so lose its democracy and sense of social cohesion, leading to distinct castes, as Vanhanen showed. VDARE.com has previously reported Kotkin’s peculiar desire for a high immigration society, and his assumption that if the immigrants are of high intellectual quality or hardworking, then everything will work fine. But this disregards evidence that, at the heights of American middle-class influence and democracy in the 1960s, people may have been “open”—but there were limits.

As Charles Murray noted in Coming Apart, they held to certain eternal, religious values. This imbued them with a sense of their own superiority as a Godly people…

In fact, Medieval Feudalism broke down due to a massive labor shortage caused by the Black Death [How the ‘Black Death’ Pandemic Reshaped Europe’s Feudal Economy, by Joe Weisenthal, Bloomberg,  January 9, 2021]. But Kotkin completely passes over the significance of this for reversing modern feudalism.

And, speaking of Charles Murray, Kotkin takes no notice of his research suggesting that a meritocratic society means that people would reach the place they deserved based on their cognitive ability, but that the very high heritability of intelligence would then mean relative social stagnation—a “cognitive elite.”

This cognitive stratification would lead to intelligence being concentrated right at the top, weakening the influence of lower classes.

However, some intelligent people within the cognitive elite might play for status by mobilizing the lower classes against those in power, appealing to the “traditional” democratic system (and perhaps to shared ethnic or cultural interests).

But Kotkin dismisses these movements as “odious.”

Likewise, in talking of the political Left’s no longer being working class, Kotkin pays no attention to the evidence that all those with genetic intelligence will now have moved out of that class. In discussing why civilizations rise and fall, and even why people seem to read less now, he shows no awareness of fluctuations in intelligence as the central factor, as explained by Edward Dutton and Michael Woodley of Menie in their 2018 book At Our Wits’ End.

Kotkin also exaggerates the coherence of his central metaphor. There is evidence, for example from economist Gregory Clark in his 2014 book The Son Also Rises, that there was as much social movement under feudalism as there was in the 1950s, despite Kotkin’s assumption.

And John Derbyshire has pointed out that those at the top of the feudal system were mounted warriors who would wage war on behalf of their society, frequently dying in the process.

One can hardly imagine the men in charge of Tech giants doing this.

Finishing Kotkin’s book, my feeling was that the central idea was