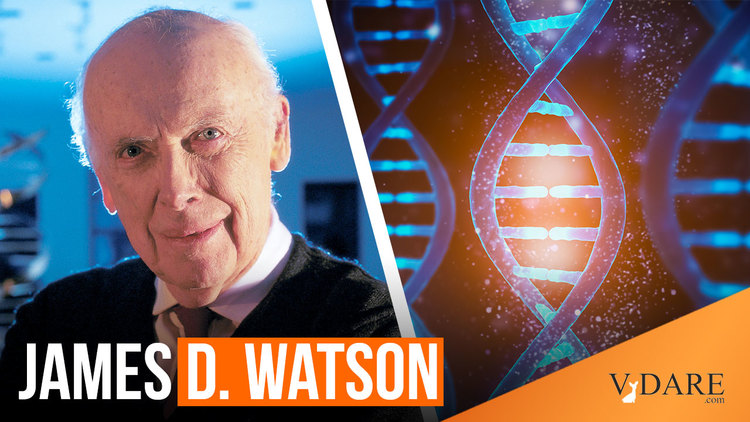 James D. Watson: Broken By The PC Inquisition, Betrayed By The Righteous Right

James D. Watson, perhaps the most distinguished living American scientist, has now been kicked to the curb by the Cold Spring Harbor genetics laboratory he rescued and rebuilt over the last 40 years for making politically (but not scientifically) incorrect statements about African IQs.

Watson's crimethink was to say he was

"'inherently gloomy about the prospect of Africa' because 'all our social policies are based on the fact that their intelligence is the same as ours—whereas all the testing says not really.' " [The elementary DNA of Dr Watson, By Charlotte Hunt-Grubbe, TimesOnLine. October 14, 2007]

A few lessons from this shameful affair:

As we can see by the enormous number of journalists and bloggers who couldn't wait to put the boot in when the great man was down, and by the negligible number who came forward to defend the co-discoverer of the structure of DNA, the chattering classes of the 21st Century are composed, by and large, of bullies and/or cowards.

Why did so many so enthusiastically sign up as auxiliaries of the Thought Police?

The psychology of those who rushed to attack Watson was memorably outlined in Orwell's 1984, when the interrogator O'Brien explains to his prisoner Winston Smith the exciting future envisaged by the Party:

"Always, at every moment, there will be the thrill of victory, the sensation of trampling on an enemy who is helpless. If you want a picture of the future, imagine a boot stamping on a human face—for ever. …The heretic, the enemy of society, will always be there, so that he can be defeated and humiliated over again. … The more the Party is powerful, the less it will be tolerant: the weaker the opposition, the tighter the despotism. Goldstein and his heresies will live for ever. … Always we shall have the heretic here at our mercy, screaming with pain, broken up, contemptible—and in the end utterly penitent, saved from himself, crawling to our feet of his own accord."

Out of the vast pile of ephemera published on, say, National Review Online during the week and a half that this disgraceful brouhaha has been going on, Google shows Watson's plight being mentioned once, by John Derbyshire—and not at all by anybody else.

The level of intellectual integrity on the Right—let alone courage—is catastrophically lower today than just 13 years ago, when the John O'Sullivan-edited National Review responded to the publication of The Bell Curve by devoting most of its December 5, 1994 issue to an impressive symposium on race and IQ.

Where have you gone, Michael Barone? (Or John O'Sullivan, for that matter.)

Another example: As of October 27, a search revealed that not one of the myriad columnists and bloggers at TownHall.com had even mentioned the Watson scandal.

As I noted at the time of the Trent Lott Lynching, a "Righteous Right" has emerged, especially in Washington, which has in effect internalized the left's hysterical race denial. The betrayal of Watson is further evidence of the profound cost of this development to American public discourse.

When you beg forgiveness, the hate-filled jackals just smell your fear and weakness. It excites them, so they pile on. Further, the watching crowd can't tell who's right, so they respect whoever seems the master of the situation at the moment.

In his October 19 response in the U.K. Independent, "To question genetic intelligence is not racism," Watson seemingly tried to be subtle, arguing that there was a difference between inferiority and diversity, then pointing out the Darwinian implausibility that everyone could have evolved to be identical.

Well, swell. But the politically correct don't engage in rational argument. They just hound and bludgeon. So you have to stand your ground.

There is so much agitprop in the media about IQ and race that only aggressive, confident responses can cut through the lies. For example, Watson could have hit back like this:

Q. Is there really such a thing as "intelligence" and can IQ tests measure it?

A. Don't be ignorant. The U.S. military has spent a fortune from WWII onward giving an IQ test to everyone who tries to enlist. The Armed Services have turned away millions of would-be volunteers and draftees because their IQs were too low. How come? Because the Pentagon has done numerous studies showing that on average higher IQ people outperform lower IQ people.

Thus the PC Inquisition has several times tried to destroy the careers of Pat Buchanan and Ann Coulter. But Pat and Ann simply won't let them.

In contrast, as soon as Larry Summers, president of Harvard, started apologizing for telling the truth and offering $50 million in other people's money as payoffs to the Sensitivity Stasi, he was doomed.

As I noted last week, in the epilogue of his new memoir, Avoid Boring People: Lessons from a Life in Science

, Watson makes clear his contempt for Summers' cowardice. Not the least of this tragedy is that, when it came to the point, his own nerve broke too.

They're vulnerable. Thus perhaps the most widely quoted smear-artist attacking James Watson has been Steven Rose. Rose is a professor emeritus of neurobiology at the Open University, a sort of British 1960s lefty version of the University of Phoenix. Rose is a Marxist and the co-founder of the boycott Israel movement among British academics.

He was also the co-author, with Leon Kamin and Richard Lewontin, of the 1984 manifesto with the amusingly unprophetic title Not In Our Genes

During the attack on Watson, Rose wrote in The Guardian:

"As for freedom of speech, these freedoms are and must be constrained. We don't have the right to casually cry fire in a crowded theatre, or to use hate speech—at least in Europe, as opposed to the US. Watson's now retracted [sic] remarks came into these unacceptable categories. So the repercussions are to be welcomed." [Watson's bad science, October 21, 2007]

Not surprisingly, Steven Rose has been accused of practicing what he preaches: having the government silence scientists whose ideas he dislikes.

According to social scientist Volkmar Weiss, a dissident under the East German Communist dictatorship, Rose ratted him out to the East Berlin regime, setting in motion the crushing in East Germany of IQ research and human behavioral genetics.

Weiss explains this in a 1983 essay entitled The Suppression of Human Behavioral Genetics by the Radical Left—unpublished, for obvious reasons, until 1991. He wrote:

"In 1980, the manuscript of the monograph Psychogenetik (Weiss 1982a) was complete. Now some fierce dogmatists were discovering that a cuckoo's egg had been laid in the nest of socialism. One example: S. Rose asked his East German colleague, the professor of neurochemistry D. Biesold at the Karl-Marx-University of Leipzig (personal communication by Biesold), whether there was no means of stopping further publications by Weiss, because such publications printed in a socialist country were particularly disadvantageous to the propaganda of the Radical Left in the Western world. …"

Rose's wish appears to have been the East German Communists' command:

"[A]t the end of the year 1982 [Walter] Friedrich [director of the Central Institute of Youth Research in Leipzig] sought and obtained the backing of high-ranking officials of the Communist Party and all further research in psychogenetics in East Germany came to an end."

Weiss goes on to describe the aftermath he endured, which would be familiar to anyone who saw the tremendous 2006 film about life in East Germany under the thumb of the secret police, The Lives of Others:

"… the cited author was under the threat of arrest and had already lost all possibility of doing further empirical work of defending his field of research. After 1984, Weiss was forced to work in a quite different field … What follows is the usual story of life and resistance under totalitarian conditions. In order to be published abroad, any new theoretical contributions had to be smuggled out of the GDR."

I asked Weiss about the incident. He replied:

"What I have written and published is completely true.

"However, in 1993 a journalist of a leading English daily (which I do not remember) visited me in Leipzig and tried to confirm my publication by independent sources. At this time [Dietmar] Biesold had already died, his widow did not know anything. Biesold, who had done research together with Rose, had told me about Rose under four eyes [in secret], and there was no witness. Evaluating this, the English daily, afraid to be sued for libeling by Rose, did not publish anything.

"After my publication, Rose had published in the Frankfurter Allgemeine Zeitung a note in which he declared that he never was involved in activities against East German scientists. My name and my publication was not explicitly mentioned, and I had never personal contact with Rose. He tried never to be active in any direct way against me and never mentioned or cited me."

Rose is notoriously litigious (recently threatening to sue for libel the author of a comic book). But the US, no doubt to Rose's displeasure, still has a First Amendment. If Rose wants to dispute the Weiss's account, he is free to write us a letter.

But the bottom line is the same: Watson has been suppressed by brute political force. The Righteous Right ran away.

As after the very similar case of Italy after Galileo, the consequences for science in the Anglosphere could be a new Dark Age.