ISIS Threatening To Use The Immigration Weapon To Conquer Europe

If the destruction of the United States through mass immigration is Hitler’s Revenge, the end of Italy will the Revenge of Gaddafi. ISIS has declared its intention to use the flotillas of illegal immigrants coming to Europe as a weapon. It will succeed, absent a dramatic change in Western leadership. And the worst part of all: events are playing out exactly as the late Libyan leader Muammar Gaddafi predicted. 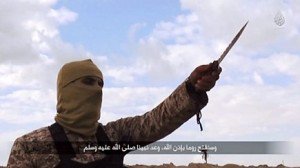 When jihadists acting on behalf of the Islamic State beheaded 21 Egyptian Coptic Christians on the shores of Tripoli, their typically-slick snuff film ended with one of the butchers raising a blood-soaked knife and swearing to conquer Rome. Contrary to the lunatic immigration enthusiasts who claim mass migration is good for Europe, the Islamic State is honest enough to say that diversity will be weakness for Europe—not strength. An online recruiter for the Islamic State boasted recently that

[T]he number of trips known as 'illegal immigration' from this coast, which are huge in number ... if this was even partially exploited and developed strategically, pandemonium could be wrought in the southern European states and it is even possible that there could be a closure of shipping lines and targeting of Crusader ships and tankers.

[Islamic State ‘planning to use Libya as gateway to Europe,’ by Ruth Sherlock and Colin Freeman, Telegraph, February 17, 2015]

Italy is already uniquely vulnerable because of its insistence on rescuing “migrants” from the Mediterranean. As even the Leftist Daily Beast admits, “smugglers, who usually melt in with the migrants, are armed and dangerous” and the government is now obliged to deploy anti-terrorism troops within the country [Italy Fears ISIS Invasion From Libya, by Barbie Latza Nadeau, February 17, 2015].

The Italian government did briefly weigh military intervention in Libya. But it quickly retreated, whimpering about a “complicated” situation and punting the issue to the UN Security Council and the “international community [which] has the means to intervene” [Renzi puts brakes on military action as Italy frets over Libya, by Oliver Baube, AFP, February 16, 2015].

The Libyan government, which actually only controls a fraction of the country, claimed that it did not want Western military intervention [Libyan FM: We don’t want military intervention, by Ali Barada, Almonitor, February 20, 2015]. However, it did say that it was coordinating efforts against its enemies with the Egyptian government, which was infuriated by ISIS’s murder of its citizens.

You would think that the West, especially the U.S., would welcome this gift of a strong Arab country which recently ousted its own Islamist leadership and is ready to undertake military action against the Islamic State.

Indeed, Egyptian President Abdel Fattah al-Sisi has spoken out against Islamic extremism with the kind of rhetoric that would be called Islamophobic or even racist if it was said by a European. Speaking recently at the Al Azhar Mosque, Sisi reiterated his dedication to Islam by decried how the religion has become a “source of anxiety, danger, killing and destruction for the rest of the world.” He cried:

“It's antagonizing the entire world! Does this mean that 1.6 billion people [Muslims] should want to kill the rest of the world's inhabitants — that is 7 billion — so that they themselves may live? Impossible!”

We’re always hearing about how “moderate Muslims” need to step up and condemn violence. Well, here’s one.

More than that, Sisi is using airstrikes to target ISIS—not platitudes. Egypt has already taken unilateral action against the terrorist group.

Yet incredibly, the United States is not backing the Egyptian military action, is withholding weapons, and is complaining about “democracy” even though Sisi initially achieved power by deposing the Muslim Brotherhood and was later duly elected [U.S. Won’t Back Egypt’s Attacks on ISIS, by Nancy Youssef, Daily Beast, February 19, 2015].

Having learned nothing from the aftermath of the Arab Spring, the Obama Administration seems determined to execute a kind of reverse Cold War policy in which friendly governments are pressured and undermined while openly hostile states are courted and rewarded [How Egypt is Harming, Not Helping, the ISIS Fight, by Sophia Jones and Akbar Shahid Ahmed, Huffington Post, February 20, 2015].

Insofar as the Obama Administration has presented a justification for its actions, it is epitomized by the inadvertently hilarious comments of State Department spokesperson Marie Harf, who is now nationally notorious for her silly idea of stopping terrorism by giving jihadists jobs , followed by the that any criticism of her was because she was “too nuanced” for dumb Americans to understand [Straight from the Harf, by Gregory Hood, Radix Journal, February 21, 2015].

But the current state of Libya is a direct result of President Obama’s actions, not some example of a society that spontaneously combusted into chaos. Former Republican Congressman Curt Weldon, who visited Gaddafi in 2011, recently reported that Gaddafi was willing to step down peacefully [Gadhafi wanted to go peacefully, not by force, by Jerome Corsi, WND, February 2, 2015] Instead, the Obama Administration armed the very Islamist rebels who are now plaguing us, all so Hillary Clinton could cackle, “We came, we saw, he died.”

And the Third World flotillas besieging Italy are exactly what Gaddafi prophesied in 2010. Unless he was there to stop them, he warned,

"Tomorrow Europe might no longer be European, and even black, as there are millions who want to come in…We don't know what will happen, what will be the reaction of the white and Christian Europeans faced with this influx of starving and ignorant Africans…We don't know if Europe will remain an advanced and united continent or if it will be destroyed, as happened with the barbarian invasions."

Who knows, maybe Gaddafi’s comments provoked anti-racist Western leaders to depose him. In any event, now the gates are open to the “barbarian invasions” in Europe, as in the United States.

Even as this is written, Secretary Jeh Johnson of the Department of Homeland Security is warning people to “be vigilant” after a threat from al-Shabaab, a Somali Islamist group [Homeland Security Chief: Be ‘vigilant’ at malls, by John Bacon and David Jackson, USA Today, February 22, 2015]. The group specifically threatened the Mall of America in Minnesota—a state with a large Somali population that keeps joining various terrorist organizations.

Yet the Obama Administration is still doing its best to import the Third World to the United States.

And Italy shows no signs of taking decisive action to stop immigration. The governments of the West seem determined to make ISIS’s job easy for them.

All the pointless troop movements, security warnings, and vast expenditures simply conceal the reality that Western leaders just don’t care about the safety of their own citizens.

We shouldn’t be surprised that our supposed leaders won’t protect the very people they are fanatically determined to replace.