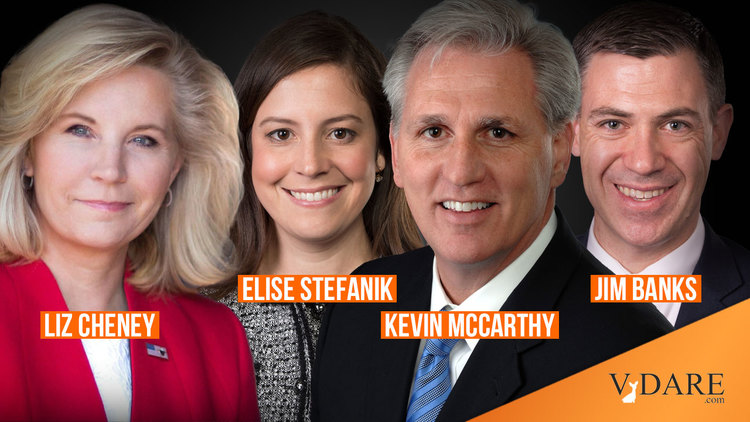 Is Liz Cheney’s Ouster A Victory For Immigration Patriotism?

Rep. Liz Cheney’s apparently compulsive criticism of Donald Trump and his supporters has finally crossed the line for House Minority Leader Kevin McCarthy and top Republicans. They’ve scheduled a vote on Wednesday to oust her as House Conference chair [House Republicans schedule vote to oust Liz Cheney, by Juliegrace Brufke, New York Post, May 7, 2021]. Her likely replacement: New York Rep. Elise Stefanik, a Trump loyalist, but also a notorious immigration enthusiast. So Cheney’s downfall is good news, but her likely replacement is not. Trumpism must encompass more than loyalty to the man. Its animating feature must be the agenda he proposed in 2015.

For weeks, GOP leaders have publicly said that Cheney must stop antagonizing POTUS 45 and calling his voters terrorists. Of course, she mulishly refused, which earned the usual hosannas from leftist Mainstream Media outlets, all of which think her job is to lecture Republicans about the “insurrectionists” who have supposedly seized the party, then move it away from Trump [Cheney Strikes Back as G.O.P. Leaders Move to Oust Her From House Leadership, the New York Times, May 5, 2021]. Her warmongering is forgiven. And, while her Trump criticism is on display, her immigration views remain unnoticed.

Surprisingly, Cheney is no worse on immigration than the rest of Republican leadership. She boasts a career A with NumbersUSA and she opposed the recent Amnesty bills the House passed in March. “The Biden Administration’s decision to stop construction of the wall, offer taxpayer money to illegal immigrants, and reimplement catch-and-release all encourage illegal immigration,” she said [Cheney: These Bills Would Exacerbate The Crisis At The Border, House.Cheney.Gov, March 18, 2021].

Cheney’s main immigration weakness: insufficient attention to legal immigration. In a sign of her staff’s poor attention to the issue, Cheney sent out an immigration memo that pilfered several passages from Joe Biden’s Amnesty bill. The memo did not endorse Biden’s ideas, but it did show that her staff was too lazy to craft talking points [Liz Cheney Sent the Whole Republican Conference Amnesty Document Lifted Nearly Word-for-Word from Biden White House Document, by Matt Boyle, Breitbart, May 4, 2021]. She also criticized Republican Study Committee head Rep. Jim Banks’ brilliant memo arguing that the GOP should turn into a national-populist party as “neo-Marxist.” Apparently, only Communists want to make immigration serve the interests of the American people instead of the Donor Class [Cheney snags victories ahead of her next battle with Trumpworld, by Melanie Zanona, Politico, April 5, 2021].

Still, despite her faults, Cheney is better on immigration than Stefanik. Stefanik’s career score at NumbersUSA is an abysmal D-, which includes two Ds, and two Fs—among the worst in the GOP. She co-sponsored the Indian green card giveaway known as the “Fairness for High-Skilled Immigrants Act,” opposed Trump’s National Emergency declaration that funded Trump’s “unrealistic” border wall, criticized his travel ban, and supported Amnesty for so-called DREAMers.

One of her signature issues is Amnesty to illegal alien farmworkers. She also co-sponsored the Farm Workforce Modernization Act in 2019 and again in March. That bill would Amnesty millions of legal aliens. After at least four years of what amounts to indentured servitude, these illegals could apply for a green card. She claims her rural district suffers “from an unstable workforce and constant demand for labor.” It’s really a rich reward for Big Ag at the expense of the American worker.

On the other hand, Cheney voted against the Big Ag Amnesty twice. She also supported Trump’s 2019 national emergency declaration that provided wall funding. That doesn’t necessarily make Cheney good, but it does make her better than Stefanik.

Yet their differences are not policy-driven. Trump, it seems, is the problem. Ever since his first impeachment trial, Stefanik has ardently defended him. She supported his challenge to the 2020 election and ingratiated herself with Fox News viewers. Cheney could barely hide her disdain for Trump. She voted for impeachment, and cannot stop talking about colleagues who supposedly threatened “democracy” by challenging Biden’s highly suspect victory. Cheney might keep her congressional seat because donors haven’t jumped ship, but she will no longer help lead Trump’s party [Liz Cheney’s top donors stand with her, by Brian Schwartz, CNBC, May 5, 2021].

Cheney might be superior to Stefanik on immigration, but rank-and-file Republicans should be glad to see her go. For Dick Cheney’s daughter, middle Americans are either cannon fodder for neocon wars … or terrorists for objecting to their own dispossession and replacement. Her GOP deserves to be buried for good.

Problem is, GOP House leaders differ from Cheney in style, not substance. McCarthy believes he can win over ordinary Republicans with Business First Republicanism dressed up as Trumpism. And, unhappily, the pitch is working on some people who should know better. Steve Bannon and the National Border Patrol Council endorsed Stefanik for conference chair. Although she co-sponsored an Amnesty just two months ago, Bannon claims she’s changed, and the Border Patrol union argues she will be a stalwart champion of border security. Of course, Trump himself endorsed Stefanik because she is allegedly a “star” and “tough” [National Border Patrol Council Endorses Elise Stefanik to Replace Liz Cheney, by Matt Boyle, Breitbart, May 7, 2021]

Not everyone is convinced. Ann Coulter, Jenna Ellis, Mark Krikorian, Revolver News, and others have attacked Stefanik for her atrocious immigration record [MAGAworld pans Stefanik, by Tina Nguyen, Politico, May 6, 2021]. The House Freedom Caucus is also leery. While party leaders aggressively whip their members to vote for Stefanik, the New York rep promises to serve only through the midterm elections. Maybe she isn’t as popular with the rank-and-file as her boosters believe [Stefanik privately pledges to serve only through 2022 in House GOP leadership, by Melanie Zanona and Olivia Beavers, Politico, May 7, 2021].

McCarthy, by the way, ran from Cheney just as he began facing scrutiny for his cozy ties with veteran GOP lobbyist Frank Luntz, a functional leftist on immigration who loathes Trump. Tucker Carlson revealed this week that McCarthy has been bosom buddies with the vile operative for years. Luntz wants an Open-Borders, Pro-Amnesty GOP. McCarthy and others, Carlson frets, are listening [Why Republicans no longer recognize their own party, by Tucker Carlson, Fox News, May 1, 2021].

Stefanik will almost certainly prevail on Wednesday, although a superior alternative is waiting in the wings who just might defeat her with a little luck: Indiana Rep. Jim Banks of the powerful Republican Study Committee. Politico reports that GOP colleagues think he’s a competent leader who gets Trumpism [The pro-Trump Republican trying to upstage Cheney, by Melanie Zanona, Politico, May 4, 2021].

The Banks memo that Cheney called “neo-Marxist” demanded that the party adopt full-blown immigration patriotism; i.e., it must tackle illegal and legal immigration. Subsequent memos have attacked Biden for his globalist Open-Border agenda.

Of course, Banks has his faults. He’s a recent convert to immigration patriotism, and he’s far too willing to throw controversial Republicans to the media hounds, e.g., condemning Paul Gosar for attending Nick Fuentes’s AFPAC event in February. Still, unlike Stefanik, he can be trusted on immigration, Political Correctness, and law and order. Banks’s replacing Cheney would signal that the party had embraced the Historic American Nation.

(Speaking to Fox News’s Chris Wallace today (below) Banks said Cheney had to be replaced because, obsessing about Trump, she has “lost focus” and has failed to “push back” against Biden’s radical agenda. Nor is she focused on retaking the House. Defending his skepticism over Biden’s victory in November, Banks didn’t let Wallace get away with placing Cheney on the side of the angels for obsessing about the “insurrection” at the U.S. Capitol on January 6. He stayed on message: Cheney’s gotta go.

Unquestionably, Trump owns the GOP rank-and-file, if not much of the party’s elected membership on Capitol Hill. Question is: will the party actually adopt the agenda he ran and won on, or will it simply stroke his ego and stick to the discredited Business First agenda?

A party with vision is not a Maoist personality cult. It must be genuinely nationalist, with plans to curb immigration, restore law and order, eradicate anti-white racism, and defend the Historic American Nation.

Cheney’s coming defenestration proves the GOP has been remade in Trump’s image. The real fight is over what the image is: a visage on a poster, or a real policy agenda that redefines an otherwise-doomed party.