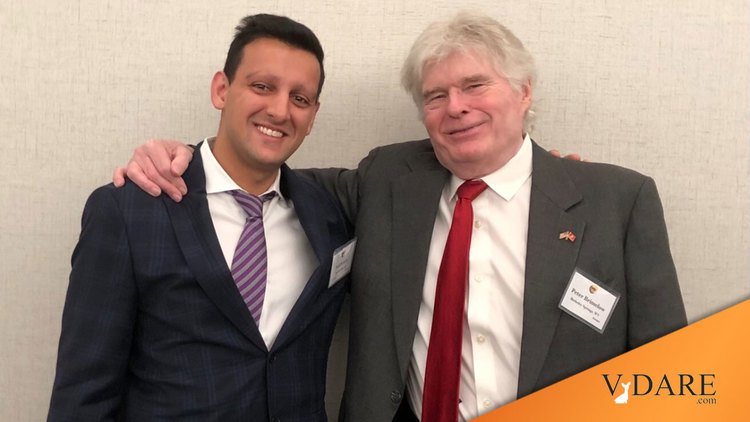 VDARE.com does not endorse political candidates, but (full disclosure) I personally maxed out to Neil Kumar, who is challenging the Walmart-supported GOP incumbent Rep. Steve Womack in Arkansas’ 3rd Congressional district. I have even given him advice, which he almost invariably ignores. I support Kumar for the same reason I maxed out to the heroic Lauren Witzke in her 2020 Delaware Senate race: both explicitly raised the issue of an immigration moratorium. And Kumar, despite being boycotted by Big Tech and the useless Arkansas GOP, has actually succeeded in getting his opponent on the record on the moratorium issue. The result was a devastating insight into brain-dead corporate/ country club GOP orthodoxy. This tree is rotten and it must fall.

Kumar achieved this feat in a candidate interview in the Arkansas Democrat Gazette [Candidates in 3rd District GOP primary split on Jan. 6 Capitol riot, key issues, May 9, 2022]. (Womack voted for Pelosi’s January 6 witch-hunt—notwithstanding which the Trump machine in its dismaying way has not endorsed Kumar).

"The most pressing issue facing my constituents is also the most pressing issue facing America: the Great Replacement. Millions of illegal aliens are pouring across our wide-open Southern Border, with hundreds of thousands of new arrivals every month..." Kumar wrote in the Democrat-Gazette questionnaire. "If we don't stop this endless flood of immigration now, our nation will be lost. My plan includes a 20-year total immigration moratorium ending both legal and illegal immigration, as well as mass deportations of all illegals, building a wall, ending birthright citizenship, taxing remittances, and denying public services to illegals. A nation without borders is no nation at all."

Womack pointed to his own "strong record on illegal immigration." He said Kumar's proposal would deny highly skilled immigrants into the United States.

"A 20-year moratorium, the fact that it's all immigration is kind of laughable that he would think that a melting pot like America is automatically one day just going to shut down everything," said Womack. "No fresh ideas, no new blood can come into this country. That's just ridiculous to make a statement like that."

This of course shows that Womack, like most of the GOP Establishment, has not given a second’s thought to the issue of an immigration moratorium—remember that the 1920s cutoffs were followed by the famous Roaring Twenties boom, ultimately aborted by Federal Reserve mismanagement—and also that he has open contempt for creativity of the Historic American Nation (notwithstanding the fact that it did create the polity to which immigrants are eager to come).

The primary is tomorrow, May 24. I don’t expect Kumar to win—although miracles happen—but I do expect the idea of an immigration moratorium to continue to advance.

It’s been 25 years (!) since Ed Rubenstein and I first calculated the electoral consequences of post-1965 immigration policy for a National Review (!!) cover story. At that point, people actually believed the Wall Street Journal edit page’s lying assurances that immigrants were natural Republicans.

Now, nearly half of Republicans accept the Great Replacement Theory. (Newsflash: it's a fact.)

I don’t think it will take them that long to get the message that an immigration moratorium is the only way forward for America.