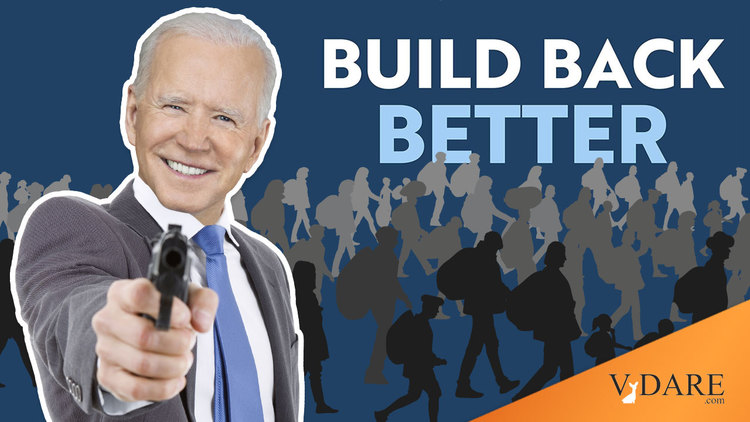 Immigration Is A Weapon, EU Says. Democrats Using It Against The Historic American Nation

As the Belarus-Poland border crisis escalates, the European Union, surprisingly enough, is siding with Poland against attack on its borders. The supranational body recognizes the obvious truth that Belarus is trying to flood Poland with migrants to punish EU over sanctions imposed on it for alleged election irregularities [EU and US accuse Belarus of 'hybrid attack' at borders, DW, November 10, 2021].

I had a productive meeting with @POTUS at the White House⁰
We touched upon a series of issues including the situation at the border with Belarus⁰
This is a hybrid attack. Not a migration crisis

Beginning of next week, we will very quickly expand our sanctions against Belarus. pic.twitter.com/nsdCVLbyk4

Americans have the same problem. But it’s not a foreign power weaponizing immigration: it’s our own president and his political party. Patriots must follow the EU’s example and boldly declare the Democrat immigration agenda, including the looming Build Back Better budget bill, a “hybrid attack”—combining a foreign invasion with internal lawfare—on the Historic American Nation.

Some of the things we see overseas are all too familiar. The Belarussian government offers generous flights to people from various spots in the world and offers them spectacular hospitality, then soldiers escort them to the Polish border [The route from Iraq to Belarus: How are migrants getting to Europe?, by Rob Mudge, DW, November 9, 2021]. In America, our government does this once “migrants” (Regime-speak for illegal aliens) cross the border. The Biden administration is spending untold amounts of money to fly migrants all over the country and house them in hotels [‘Send them to Delaware’: DeSantis threatens action over secret migrant flights, by Haley Brown, NY Post, November 10, 2021]. And the feds aren’t doing this to usher them into a third country, but to overwhelm our American towns and cities. Which, unlike Poland, have no barriers to protect themselves.

EU officials and Polish leaders denounce Belarus’ activities as an affront to the law [Tension mounts as soldiers and migrants mass at Belarus-Poland border, by Anny Noryskiewicz, CBS News, November 9, 2021]. Our government, on the other hand, tells its agents to catch and release detained “migrants,” simply give them a notice to report to court in 60 days.

And even the notices are lenient. As leaked documents read:

Don’t worry if you are past the 60-day deadline to report from the time you entered the United States. Come in so you can help ensure the best outcome for your case.

Unless you have committed a serious crime, or the government thinks you may be a risk to the United States, YOU WILL NOT [emphasis in the original] be taken into custody during the appointment.

Thus our president and Homeland Security Secretary Alejandro Mayorkas, along with Treason Lobby legislators, tell illegal aliens to continue to flout our own laws. It even tells them authorities won’t deport them unless they commit a “serious crime.” Belarus might violate international law as it flies in immigrants to push into Poland. But at least they don’t want the “migrants” to stay. The Biden Regime is doing everything it can to keep illegals here, numbers regardless.

Most European countries seem to acknowledge that a country has a basic duty to control its borders. But Biden and Mayorkas, who was caught finagling visas for wealthy foreigners during the Obama administration, oppose any idea that might secure the border. Republican Louisiana Sen. John Kennedy nicely summarized that truth in a pointed question to Mayorkas this week:

[Kennedy to Mayorkas: Is White House incompetent, or do they believe in open borders?, Kennedy.Senate.gov, November 16, 2021]

Mayorkas, of course, deflected the question.

Belarus tries to lure migrants to its country on the promise of entry into the promised land of Europe. The Democrats promise the same thing to illegals. The party is still committed to giving legal status to millions of illegal aliens through the Build Back Better budget bill, which just passed the House.

The Democrats are using the reconciliation process to smuggle immigration policy changes into a budget bill because such bills only require a simple majority. The catch is that the Senate Parliamentarian, Elizabeth MacDonough, must determine that these provisions must be found to narrowly pertain to the budget. Democrats originally wanted a “pathway to citizenship“ for at least eight million illegals. The Parliamentarian said that could not be included in a budget bill. Democrats tried a second proposal that would have given a pathway to citizenship to any illegal who arrived in the U.S. prior to 2011; MacDonough ruled against that as well. The final option is to give 65 percent of illegals legal status but no pathway to citizenship. This “parole” option would allow these illegals to stay in the U.S. and obtain work permits and driver’s licenses. MacDonough hasn’t ruled on that one, which was included in the bill the House passed. If she rejects it, the Senate will be forced to craft a new Amnesty provision or drop the idea altogether [How the House spending bill sets a path to legalization for undocumented immigrants, by Maria Sacchetti, Washington Post, November 19, 2021].

On top of that, as the Post’s Sacchetti reported, Democrats want to capture over 400,000 “unused” green cards from years past and give them to foreigners in the immigration backlog. The budget bill will also make it easier for foreigners to obtain visas, and will award visas from the Diversity Lottery to aliens denied entry under President Trump’s travel ban.

But some Leftists and Democrats aren’t so thrilled with the bill’s prospects. Some believe the immigration provisions will be stripped when it reaches the Senate, either because Parliamentarian MacDonough kills them or moderates oppose them. And progressives are irate that parole doesn’t grant a pathway to citizenship. They demand it, the parliamentarian be damned [Democrats Are Set to Leave Immigrants in the Lurch Again, by Nicole Narea, Vox, November 15, 2021].

Leftists might be too pessimistic, however. Arizona Sen. Kyrsten Sinema, who has loudly shouted her skepticism about the budget bill, said last week she supported its immigration provisions. “I do support a comprehensive immigration reform with a path to citizenship for individuals who are Americans in everything but name,” she told reporters. That’s ominous for immigration patriots, but still not a definite sign she will support whatever the Democrats bring to the table [Sen. Kyrsten Sinema supports adding immigration policies to spending bill, KTAR News, November 11, 2021].

Whatever happens, it’s clear that Biden and his Treason-Lobby legmen want a foreign population to invade and colonize our country. The bill contains zero border measures, a departure from past Amnesty attempts. So any new Amnesty will draw more illegals even as the regime eliminates any means of keeping out future arrivals.

One thing to keep in mind is that the size of the invasion is far larger for America than in Europe. An estimated 3,000–4,000 migrants are massed at the Belarus-Poland border [Poland-Belarus border: What you need to know about the crisis, Al Jazeera, November 15, 2021]. America has detained at least 1.7 million illegal aliens at the border this fiscal year—and those don’t include hundreds of thousands believed to have eluded authorities [Situation at the southern border worse that you probably realize, by Nolan Rappoport, The Hill, November 15, 2021].

Europe is saying it’s under attack because a mere few thousand migrants are attempting to crash the Polish border. But our president insists we have no border crisis as hundreds of thousands of illegal migrants pour into our country every month. It’s an invasion, and our leaders are leaving the gates open and lying to Americans about the foreign threat that walks among us.

This is an attack on the Historic American Nation. Democrats and GOP and Deep State elites who rule us endorse it. Patriotic Republicans have just one option: push for impeachment. Facilitating a migration attack against the United States is a high treason; this is far more dangerous than anything President Trump was falsely accused of doing and for which Democrats impeached him.

And if the Build Back Better bill does pass the Senate, Republicans must pledge to reverse the Amnesty. They can’t let this stand and expect to win in 2022. They must promise to restore law and order and eliminate the main attraction to further illegal immigration. What good is a Republican-controlled Congress if they won’t?

The invasion won’t end until our elected officials decide they can no longer exploit immigration to destroy the Historic American Nation. Democrats can see how poorly they do in the polls on this issue, but they don’t care. Their longer-term objective is more important than short-term political losses.

So it’s up to Republicans to push for impeachment now—and run on a platform of reversing Biden’s treasonous border policies.