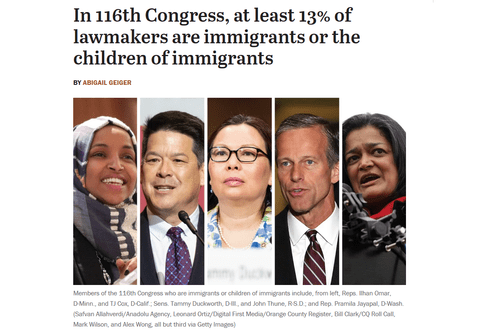 As big a problem Rep. Ilhan Omar is for Jews, Israel and the Democratic Party, she is the face of a much bigger problem for the historic American nation: immigrants, or their children, from what it is now apparently Politically Incorrect to call the Third World being elected to Congress.

Granted, the proximate target of the Muslim Somali refugee’s ire is Israel. “It’s all about the Benjamins,” the Koranically-sworn congresswoman famously tweeted. “I am told everyday that I am anti-American if I am not pro-Israel,” she answered when a Jewish Democrat called out her “anti-Semitism.”

And, granted, the Democrats, particularly open-borders Jewish Democrats, are getting what they deserve. In a party where the sine qua non of success is unqualified support for Israel, top leaders don’t know what to do about Omar, whom they merrily invited to join their subversion.

But however much she fulminates about Israel, her ultimate target is you and me, Jewish or not. She’s in Congress to change the country, and not for the better as real Americans go, given her origins in a country with zero experience in the rule of law and the democratic laws and customs that grow out of it. In Somalia, to quote Mao, power grows out of the barrel of a gun.

Omar isn’t the only one, either. The immigrant or child-of-immigrant contingent in Congress is non-European.

Forty-two are from Asia, the Middle East or South America. As for the foreign-born, Pew reported, the number is 14, or 3 percent. Only one is European—Polish-born Tom Malinowski. Here's the list:

Of course, 57 of the 68 are Democrats. It’s 58 if you count Bernie Sanders, the child and grandchild of immigrants.

Last session, 12 percent of congressmen were immigrants or the children of immigrants, and in 2015, the number dropped to near nothing. Only six were immigrants, but they all had something in common. Not one was from Europe.

Pew’s data show zero immigrants in Congress from 1967 through 1973, but the research center also pointed to a compelling mid-20th-century study: Every immigrant who served in Congress from 1789 through the next 160 years was European with just one exception [The Foreign-Born in Congress, 1789–1949: A Statistical Summary, by Murray G. Lawson, American Political Science Review, December, 1957]. Mexico-born Octaviano Ambrosio Larrazolo, the former governor of New Mexico, served a year in the U.S. Senate, 1928-1929. He was a handsome, highly educated man who looked as white as Donald Trump, at least in black and white.

As for the first Congress, four of its 29 senators were born in the old country: two in Ireland, one in Scotland and one in England; four of the 66 members of the House were born in British Isles: two Ireland, two in England. One was born in Bermuda, which really wasn’t the old world but still a British possession. So, nine of the 95 members of the first Congress of 1789, about 10 percent, were foreign born. A century later, it was 8 percent.

But Pew’s using “immigrant” to describe the foreign-born 1789ers elides an important truth. Those men weren’t “immigrants” in the sense that Omar and others are. They were settlers building a new nation. They weren’t immigrants demanding change to an existing polity. And they were, as John Jay said, “descended from the same ancestors, speaking the same language, professing the same religion, attached to the same principles of government, very similar in their manners and customs.”

The danger of a Third-World beachhead on Capitol Hill, almost all open-borders Democrats, are obvious. They consider illegal immigrants and fake refugees real constituents. Consider the activities of Pramila Jayapal, born in India, who boasts about flouting and subverting immigration law.

“I was able to successfully assist 5 asylum seekers—2 unaccompanied minors, a mother and her 9 year old child, and a young man with a serious medical condition—into the United States,” she harrumphed on Twitter. [December 1, 2018] “Initially they were denied, in violation of U.S. and international law, but I was able to intervene and ensure that they could simply present themselves for asylum in the United States.”

I was able to successfully assist 5 asylum seekers - 2 unaccompanied minors, a mother and her 9 year old child, and a young man with a serious medical condition - into the United States.

In other words, an Indian, feet still wet from the Ganges, lectures us on what it means to be an American, and helps illegal aliens file what are most likely phony asylum claims [A Border Security and Humanitarian Crisis, Whitehouse.gov, January 2019]. But that wouldn’t matter to someone who didn’t love her own country enough to stay put and change things there, not here.

As for those who oppose her, Jayapal flatly says Trump is a white supremacist “His ultimate goal is to make America pure in the sense of not having immigrants, not having folks of color here and shutting down every form of legal immigration, all to throw a bone to those people,” she told MSNBC’s Chris Hayes in an interview. “Those people,” of course, are Trump voters.

Then she confessed her motive:

As an immigrant myself, it is so deeply offensive to see the harm that he’s causing to people across the country, people who are terrified, who don’t feel that they belong, the people who are seeking asylum who no longer can get in, even though it’s legal to seek asylum, and not just at a legal port of entry.

In fact, of course, Jayapal and her ilk don’t “belong,” Trump isn’t harming anyone, and stopping the likes of Jayapal from getting into the country would be a great help to Americans, not least because crazy white Leftists wouldn’t get the guilts and send them to Congress. 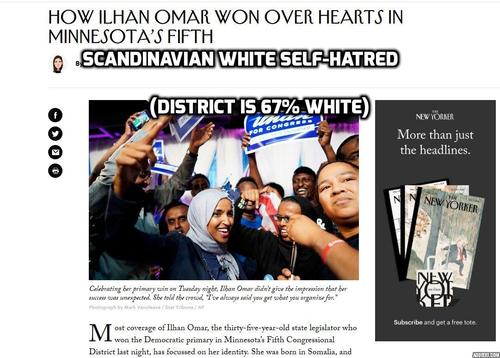 Unsurprisingly, Omar and Jayapal joined Alexandria Ocasio-Cortez (technically not of immigrant stock only because we haven’t yet expelled Puerto Rico) in calling for the abolition of Immigration and Customs Enforcement. Like Jayapal, Omar didn’t love her own country enough to stay and change it. She wants to wreck ours. “Abolish ICE,” she tweeted. “There is no compromise. Our immigration system is deeply broken. We shouldn’t seek to punish families seeking safety and opportunity. We should create fair and accessible pathways to citizenship.”

Translation: Keep letting people like me into the country without limit.

Well, the few remaining white Democrats, particularly Jews, now know what that means: giving African and other Muslims a voice in the party on Israel policy. Of course, Democrats didn’t have that in mind when they dropped the preference for immigration from Europe in 1965, thanks largely a left-wing Jewish congressman from New York, Emanuel Celler. His Irish-American messenger boy in the Senate, Ted Kennedy, helped jam the Third World immigration bill down the country’s throat after lying about it. It wouldn’t, he said, alter the country’s demographics.

(Speaking of Celler, a fun fact: In The Godfather, when Nazorine the Baker asks for the Don’s help to keep his immigrant future son-in-law the country, consigliere Tom Hagen asks his boss which of his bribed politicians should get the job. Replied the Don, “Give it to a Jew congressman in another district.” I doubt if novelist Mario Puzo or  Francis Ford Coppola were thinking of Celler, but a “Jew congressman” certainly did alter the country’s demographics. 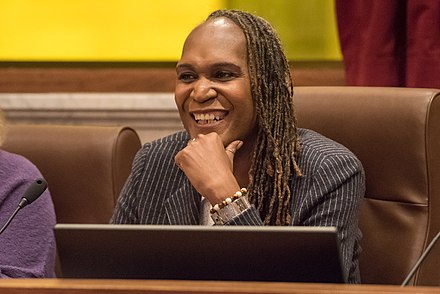 Yet Jewish Democrats and their allies how profess themselves shocked at the unforeseen consequences, one of which was Omar. Congress passed a resolution condemning anti-Semitism [House overwhelmingly passes broad measure condemning hate in response to Rep. Ilhan Omar’s alleged anti-Semitic comments, by Mike DeBonis, Felicia Sonmez and John Wagner, The Washington Post, March 7, 2019]. It didn’t mention Omar, and instead blamed “white supremacists”, but the Israel lobby made its point.[Full text of House Resolution against hate, including anti-Semitism , Times Of Israel, March 8, 2019] Needless to say, Jewish Democrats back home want Omar gone—even trying “to entice Minneapolis City Councilwoman Andrea Jenkins, the first "openly transgender African-American woman elected to public office in the United States” into the race. (These are Democrats. You can’t make this stuff up.)  [Democrats upset over Omar seeking primary challenger, by Reid Wilson, The Hill, March 14, 2019].

Worsening matters, added to that newly-elected anti-Israel phalanx are many members born in 1973 or after, who are “ardently socialist, anti-Israel, and contemptuous of America and its history,” Newt Gingrich observed [Young Democrats are Throwing a Party, and the Grandparents Are Not Invited, Gingrich 360, March 8, 2019].

All that said, here’s the thing:

However right the angry Muslim refugee is about the Israel lobby and Jewish power, paleocons and immigration patriots must not join her. Omar wants to diminish support for Israel because she hates the Jews, not because she loves the United States and wants to disentangle us from the Middle East. As Joe Sobran said by the way, we want to see—although not help—Israel prevail over its Islamic enemies for the same reason we want the mammal to win in a fight against a reptile on Animal Planet. We have a natural affinity for our own, even if that small part of our own can be an obnoxious pain.

A final gangster allusion to illustrate the richly amusing irony of what the Democrats face in a party with more and more Omars: When a Hasidic hotelier asks Tony Soprano to help solve a problem, the New Jersey mob boss takes over the hotel. The owner regretfully cries that he created a golem—a monster. Democratic immigration ideology, conceived and backed by Jewish Democrats, has unleashed a golem in the Capitol would harm Israel.

But that same golem wants to harm us. It is hard left, heavily black and heavily Hispanic, not to mention partly Islamic. So yeah, it’s anti-Israel. But it’s also anti-white, anti-Christian, and anti-American.

Open borders doesn’t just mean flooding the country with a teeming horde of the illiterate, the unemployed, the diseased and the criminal.

It means more Omars in Congress.

And we know what that will mean for the historic American nation.