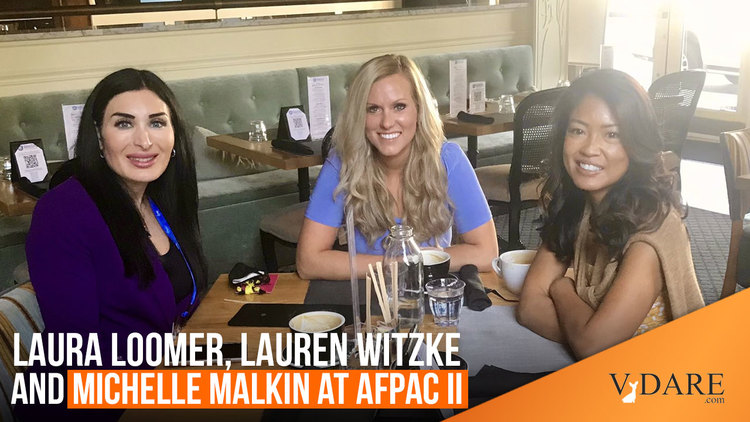 AFPAC II was three times as large as AFPAC I, pulling in 600 young people. And I mean young! While I was waiting to check in, one of the cheerful young men asked me how old I was. I’m thirty, and I must have been in the oldest one percent! He nodded, saying “Everyone is so young here! Early 20s I think!” When I told my boss this story, he said a young man should know better than ask a lady her age. Funny thing is, I’m used to answering this question at political conferences, like AmRen, but this is the first time I felt OLD!

As we were entering the ballroom, one of the young men asked “Were you nervous meeting Nick? After seeing him so many times on the stream?” Another introduced himself by his twitter handle. And afterwards, a young man pulled Michelle Malkin aside to tell her about his new Gab account.

A female friend and I were stoked to see Lauren Witzke in attendance with the handful of other women in this sea of sharply-dressed young men. In the reception area, the always-confident Laura Loomer stood out in a deep purple pantsuit.

Though the audience was overwhelmingly (and unashamedly) white, there were also a few black and Asian allies. (And not just Jon Miller, who joked from the stage about being a token black speaker.) I was lucky enough to find my way into open seat next to Bryson Gray.

Being a Boomer at thirty, I had no idea who he was, but luckily Jaden McNeil introduced us. (For the other Boomers out there, Bryson Gray is a pro-Trump, pro-Life, pro-2A black rapper.) Known for his song, Hate Speech, Gray said, “I believe in free speech—all speech."

Every speaker got a standing ovation. As Steve King ascended the stage, attendees chanted “King! King! King! King!” Nearly all 600 stood and chanted “America First,” “Destroy the GOP!” and “Christ is King!”

It must have been nearly midnight by the time Rep. Paul Gosar took the stage, but the crowd was still pumped. Nearly all 600 people standing and shouting “Go-sar! Go-sar! Go-sar!” as he approached the podium.

Gosar returned to CPAC the next morning, and America Firsters waited outside to greet him enthusiastically after his appearance.

Meanwhile inside CPAC, naive young volunteers held signs that said “Please wear a mask.” A friend who attended CPAC said to me over breakfast: “Can you imagine volunteering for CPAC thinking, ‘Woah, I’m gonna make a difference!’ But you’re standing in a corner holding a sign that says please wear a mask!’”

As the young people would say “That’s cringe!”

From the perspective of these America Firsters, there’s no future for Conservatism Inc. RINOs in the Republican Party. The organizers like Matt Schlapp and his wife Mercedes (or “Merthedes” as Michelle Malkin mocked her) do their best to gatekeep. But it’s unclear why they bother at this point.

CPAC ran into a series of blunders starting by inviting black supremacist Young Pharaoh and then cancelling his appearance due to anti-Semitism (America Uncancelled! Also, Jews > Blacks at CPAC), letting this awkward thing happen,

and then building their stage what Regime Media has decreed was the wrong shape [Hyatt Hotels said it's taking claims the CPAC stage was inspired by a Nazi rune 'very seriously' and called hate symbols 'abhorrent,' by Sinead Baker, Business Insider, March 1, 2021]. VDARE.com’s Peter Brimelow rightly pointed out that this paranoia makes the Left look mentally ill, which they are. Even Jared Holt had to step in for damage control. (The tweet he was replying to was taken down—see here.)

These CPAC gatekeepers are ruthlessly mocked by this young, confident America First bloc.

When I say bloc, I mean a rapidly growing voting bloc. Podcaster Vincent James alluded to this when he began the evening quoting a caller on Rush Limbaugh’s show: “We spent our lives voting for these people because they’re not them. I don’t want to do that anymore.”

James argued that the GOP’s objections to the election results were mere posturing and the events of January 6th “gave them an Out.” Of these so-called conservative representatives, he said, “They cowered and they caved. They genuflected [shoutout to John Derbyshire’s favorite word!] to the mob…The GOP not only turned their backs on us, but they willingly and happily fed us to the wolves.”  Clip

Alluding to Conservatism Inc. reps like Kelly Loeffler, Mitt Romney and Liz Cheney, James quoted the poem “The Snake” -–“We knew damned well that they were snakes before we let them in.” [Clip]

Well, this voting bloc doesn’t intend to “let them in” anymore. The crowd chanted “Destroy the GOP!”

Nick Fuentes closed the evening saying we need to find out which Conservatism Inc. representatives are vulnerable in 2022 and run people against them. But most important, he said, this is going to be fun.

Fuentes said: “My lawyers are going to get upset with me for saying this.” He paused for a few seconds and smiled broadly at the audience before continuing

While I was there in D.C., outside of the building, and I saw hundreds of thousands of patriots surrounding the U.S. Capitol building and I saw the police retreating ... I said to myself: “This is AWESOME.”

The crowd erupted in applause.

You’re not supposed to like the guy carrying around Nancy Pelosi’s lectern “with a twinkle in his eye,” as Fuentes remembered. But we can’t help it. To me, “Podium Guy’s” smile said, “We’re taking out country back, and having the time of our lives while doing it.” That’s really fun.

But the grave reality of our situation is, Podium Guy was charged with three felonies. I met several people in the audience who had to participate in the Address Confidentiality Program to avoid stalking and threats of violence from the real domestic terrorists, Antifa.

The young men of AFPAC have a very difficult road ahead of them.

Michelle Malkin offered these words: “The consolation is that you no longer have to suffer in silence or suffer alone.”

Her speech is worth reading in full here, but she ended by quoting William Ernest Henley’s Invictus, which means “unconquerable” in Latin.

In the fell clutch of circumstance

I have not winced nor cried aloud.

Under the bludgeonings of chance

My head is bloody, but unbowed…

…It matters not how strait the gate,

How charged with punishments the scroll,

I am the master of my fate,

I am the captain of my soul.

At the end of the conference, while we were clustering around the speakers, one young man said: “I trust the people here more than most people. Like that guy over there—I met him once at the Groyper Wars and we just drove 17 hours together to come here!”

Whatever waits for these young men and women, I believe they’ll bear it “bloody but unbowed.”

And maybe, probably, with a twinkle in their eye.

VDARE.com Lady Reader (email her) is willing to disclose her age but nothing else!