How We Got Here: Foundations Fund Open Borders Agenda 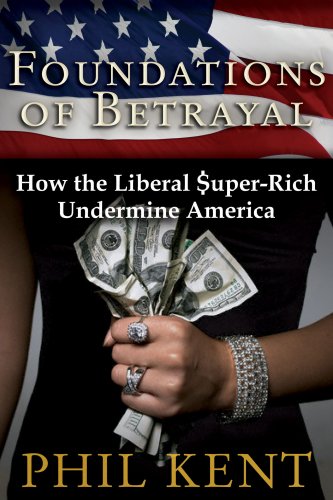 Thousands of private tax-exempt foundations, which could be donating millions of dollars to address domestic medical and educational needs, doggedly fund their own ideological objectives in myriad ways that harm the United States. As documented in my new book Foundations of Betrayal: How the Liberal Super-Rich Undermine America, hundreds of these big foundations specifically underwrite agendas aimed at radically changing the United States through demographic change. My research concluded that, along with the environmental groups that peddle fear and flawed science, the most popular recipient of massive foundation money is the vocal Open Borders/ multicultural lobby that, among other things, backs amnesty for 12-20 million-plus illegal aliens and the creation of so-called "guest worker" programs.

One of the most militant: the National Immigration Forum, which received over $3.3 million in grants in 2004 alone from the Ford Foundation, the John D. and Catherine T. MacArthur Foundation, George Soros' Open Society Institute and even the Fannie Mae Foundation.

The Forum, which works with U.S. senators like Edward Kennedy of Massachusetts to secure congressional passage of illegal immigrant amnesty, was founded by civil rights attorney Rick Swartz and mightily assisted by Harriet Schaffer Rabb, a Ford Foundation trustee and co-director of the Immigration Law Clinic at Columbia School of Law. Swartz was replaced as executive director in 1990 by someone even more radical— Frank Sharry, who previously headed the Boston-based Centro Presente. That august group assisted Central American "sanctuary" movements that hid immigrants from the law and supported the pro-Communist Sandinista dictatorship against the Reagan Administration-backed Contra insurgency in Nicaragua.

In Foundations of Betrayal, I name the Ford Foundation, with its assets of over $11 billion, as the most radical— with Soros' Open Society Institute "No. 2 and trying harder." The National Immigration Forum, MALDEF and La Raza collectively received more than $3.25 million from Ford just since 2005.

Ford's website highlights its support of many political advocacy groups such as the Migration Policy Institute, the Immigrant Workers Citizenship Project and the Lesbian and Gay Immigration Rights Task Force. Colleges are also given grants for coddling illegal immigrants, like the University of Texas for its "Mexican border philanthropy project." Hundreds of similar Ford Foundation recipients could be listed but space doesn't permit it. And it was Ford that provided the seed money to found MALDEF in 1968.

An influential organization hostile to American nationalism is the New York City-based Council on Foreign Relations. This internationalist organization has been consistently underwritten for decades by leading foundations including Ford, Rockefeller and Carnegie. As cited in Foundations:

"Consider a recent CFR foray— a People's Republic of North America. How does one explain the vice chairman of its task force on North America, in a 2006 appearance before a U.S. Senate Foreign Relations Committee hearing, recommending a merger of the United States, Mexico and Canada into a North American Union? Dr. Robert Pastor coupled it with a proposal to expedite Latin American trucks crossing the erased borders via new toll superhighways running through Middle America. Pastor further advocated a 'North American dispute resolution' super-court to issue rulings affecting all three countries. All of this and more is contained in an official 59-page CFR report."

The liberal super-rich elites of the foundation world are committed to a starry-eyed, globalist mission. My book quotes a third generation Rockefeller, Laura Rockefeller Chasin, actually saying, "It's hard to get rid of the money in a way that does more good than harm. One of the ways is to subsidize people who are trying to change the system and get rid of people like us."

Soros also chimes in with a chilling quote: "The main obstacle to a just and stable world is the United States."

This self-hating mindset underscores what the large majority of patriotic Americans are up against. It is an agenda that says: "Let the barbarians past the gate. Give money to them. The United States, or whatever it will be called in the future, will then be a better place."

And America's leading foundations, many hijacked in recent years by radicals, fuel this approach—with a multiethnic, multilingual version of Brazil apparently being the perfect replacement.

President Thomas Jefferson is supposed to have warned, "The issue today is the same as it has been throughout history, whether man shall be allowed to govern himself or be ruled by a small elite." How true that is, especially as we witness the big foundation elites and their allies on Capitol Hill and in the media pulling out all the stops to secure illegal alien amnesty, to oppose  and to allow additional foreign workers to flood our country to replace Americans.

Phil Kent (email him) is an Atlanta, Ga., communications consultant and author of Foundations of Betrayal: How the Liberal Super-Rich Undermine America, Personalized, signed copies may be ordered from his website www.philkent.com. Listen to Phil Kent speak about his book here.