Youth culture trend spotter Irma Zandl offered the most intriguing bad prediction - not because she alone messed up, but because she had the guts to admit a mistake that has been made repeatedly since.

"Things That Have Not Happened—1988: The Hispanic influence

"We felt that this country would become more Latinized. However, with the exception of food and beverages and an occasional musician (e.g. Ricky Martin or J-Lo), we have not seen the kind of widespread influence that we anticipated. For example, there are still no mass fashion trends, no mass entertainment trends, no mass social trends rooted in the Hispanic culture."

I certainly don't blame Zandl for her fallacious forecast. I assumed exactly the same thing in 1988. The signs were pointing toward middle class American culture becoming more Latin. 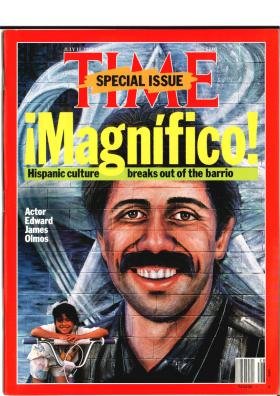 That year Time Magazine put an East L.A. mural of the formidable Mexican-American actor Edward James Olmos on the cover over the headline: "¡Magnifico! Hispanic culture breaks out of the barrio." As the laconic Lt. Castillo, Olmos had provided the moral center of gravity for that ultimate 1980s TV series, Miami Vice. And Olmos earned an Oscar nomination in 1988 for his portrayal of the inspiring calculus teacher Jaime A. Escalante in Stand and Deliver.

Back then, Corona was the coolest beer and East L.A.'s Los Lobos was the most talented rock band.

The year before their sensational cover version of "La Bamba" supercharged the hit biopic about Mexican-American musical prodigy Ritchie Valens.

Southern California architects had finally returned to building in the white stucco and red tile roof Spanish Mission style that suited the climate so well.

With the constant influx of new Latino immigrants, I thought, how could this trend not snowball?

Fifteen years have gone by. Hispanics have (supposedly) surpassed African-Americans to become the largest minority. But their impact on American culture lags far behind blacks - and even behind the much less numerous East Asians.

This weekend's Movie of the Century, The Matrix Reloaded, for example, is full of black actors and stunts inspired by Hong Kong action movies and Japanese anime cartoons, but there's nothing Latin American about it.

Of the approximately 270 movies to make $100 million at the domestic box office, only "Spy Kids" had a primarily Latino cast.

In 1999, Time made Puerto Rican singer Ricky Martin its cover boy over the headline "Latin Music Goes Pop!" But Pop! turned out to be a better description of poor Ricky's career.

Even here in L.A., I'm repeatedly struck by how little impact Hispanic culture has on the tastemakers. Consider architecture. The lovely and time-honored Mission style has gone out of fashion again. What's hot now, as embodied in the Walt Disney Concert Hall downtown, is Frank Gehry's Mangled UFO Wreckage Look. The abrasive new Roman Catholic Cathedral, of all buildings, rejects populist Latin American styles for an intellectualized European deconstructionist look.

What happened? Why have all the pundits been wrong- going back to Zandl and me in 1988?

Exacerbating the problem, Spanish-language television panders to the lowest tastes of its viewers. In L.A., the tawdriness of the Spanish channels contrasts sharply with the seriousness of the channel for Korean immigrants, who come to America with much better educations.

The Spanish networks' fundamental rule seems to be: "There must be at least one bimbo on screen at all times."

As opposed to the Bush Administration, whose motto is: "There must always be Hispanic Republicans on the horizon."