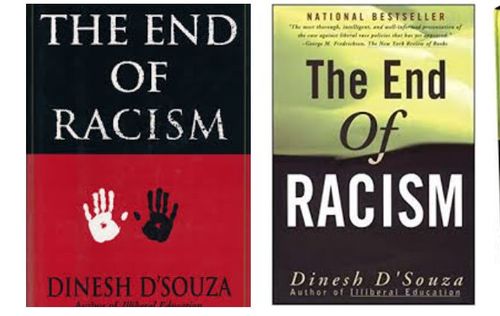 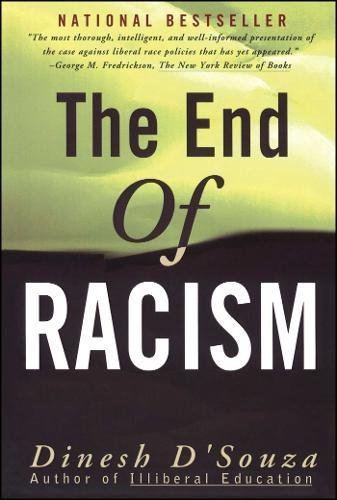 The End of Racism: Principles for a Multiracial Society, by Dinesh D'Souza (Free Press, 724 pp., $30)

"I AM married to a Protestant woman named Dixie, who was born in Louisiana and raised in California and whose ancestry is English, Scotch Irish, German, and American Indian," reports Dinesh D'Souza, America's most famous Indian immigrant since—who? Maharishi Mahesh Yogi? Listing his multicultural credentials in what he must have known would be a vain effort to reason with the storm of abuse that has since broken over his important new book, Mr. D'Souza adds: "Our new-born daughter, Danielle, is, well, beyond racial classification."

In fact, of course, Danielle D'Souza is not at all beyond racial classification—though any parent will recognize her father's belief that she soars above classification of any kind. She is a Eurasian, of essentially the same provenance as the Anglo-Indian community that became a distinct mediating caste in British India and produced, among other notable scions, the regal Hollywood star Merle Oberon. Danielle's father here is truckling to the many American intellectuals who cannot or will not think rationally about race and its role in society; and to their frequently expressed hope that a couple of generations' intermarriage will make the whole question go away.

As a member of another Indian minority community—D'Souza's ancestors converted to Catholicism generations ago in the Portuguese enclave of Goa—he must be aware that this hope is false. It is precisely the most diverse societies that become the most obsessed with minute gradations of human type, not least because these different human types tend to gravitate to different social levels. Indeed, D'Souza actually cites the notorious multiplicity of Latin American categorizations: mulattos, quadroons, octoroons, mestizos, and zambos (who they?—the offspring of blacks and Indians); not to mention barconos, castizos, lobos, moriscos, zambagos, etc.

Thus fleetingly, charmingly, Mr. D'Souza flinches in the face of the conventional wisdom. And his flinching, inconsequential in this case, points to a hairline fault that runs right through his book. In The End of Racism, D'Souza takes many courageous stands; his book has a powerful major argument and endlessly fascinating detail. (Where else have you read that Franz Boas, father of the dominant relativist school of anthropology which has succeeded in extirpating the discipline's historic interest in racial differences, was not just an intellectual thug but a full-fledged Soviet fellow-traveler?) But it remains ultimately incomplete, in terms both of fact and of theory.

Despite its subtitle, The End of Racism is about not multiracialism but biracialism: specifically, the relationship of blacks to whites. Its thesis is a direct assault on the central dynamic of contemporary liberal politics, recently reaffirmed by none other than President Clinton: the idea that white Americans are incorrigible racists and that black Americans must be protected from them by the coercive power of government.

In contrast, by skillfully marshalling facts that are publicly available but rarely brought together in a systematic way, D'Souza argues that the plight of black Americans must be largely attributed to their own dysfunctional culture. His powerful thesis has to be qualified: blacks live in America, partake in its common culture, and are open to its increasingly corrupt influence. But black Americans have inherited and developed attitudes and traditions that make them more vulnerable to such corruption. After all, whites are not forcing blacks to have their current illegitimacy rate (68 per cent, nearly three times as high as in the immediate aftermath of slavery) or to provide over half of U.S. murder victims (94 per cent of whom are killed by other blacks).

Still more controversially, D'Souza demonstrates that much of what is currently condemned as racism is actually what he calls "rational discrimination." Unjust as it may be when a cabdriver refuses to stop for any young black man in particular, the plain fact is that cabdrivers have good reason to fear young black men in general. Repressing this type of discrimination means forcing cabdrivers to take greater risk of physical injury in order to save young black men from hurt feelings.

Of course, this is essentially what the Clinton Administration is trying to do to banks, by pressuring them to extend mortgages equally to blacks. But as D'Souza notes, crediting the discovery to a story I co-wrote with Leslie Spencer in Forbes, blacks' mortgage-default rate is actually the same as that of whites, whereas it would be lower if banks were unjustly turning away deserving black applicants.

The difficulty with D'Souza's diagnosis is that it offers depressingly little hope for change. Governments are even worse at prompting moral regeneration than at Warring on Poverty or achieving the other boasted aims of Lyndon Johnson's Great Society, from which current civil-rights law so fatally derives. D'Souza makes a good case that public policy should eschew liberal relativism. He bravely endorses a proposal he attributes to University of Chicago law professor Richard Epstein, in his book Forbidden Grounds, that equal-opportunity law should be restricted to government employment, which would certainly sharpen discipline in the private sector. Still . . .

But D'Souza's focus on dysfunctional black culture is certainly more palatable to politicians than Richard Herrnstein and Charles Murray's argument in last year's The Bell Curve that, for genetic reasons, blacks may have systematically lower average intelligence than whites. D'Souza provides a fair review of this bitter controversy. He makes clear quite how much damage Herrnstein and Murray have inflicted on their academic opponents—even Steven Jay Gould has apparently retreated to "agnosticism" on race-based IQ differences. But in the end he again flinches from a clear conclusion.

Given the tough, unsentimental language in which Mr. D'Souza clothes his argument (and which has led some conservatives such as Glenn Loury to attack his book), flinching may seem an odd accusation. It is nonetheless a fair one. Having eliminated white discrimination as the cause of black America's discontents, and having posited culture and genetics as the other possible causes, he announces in effect that he just sort of hopes that it is culture that accounts for the IQ gap (which therefore might ultimately be closed). This hope is morally appealing and widely shared. But relying on it fundamentally weakens D'Souza's book.

His flinching cannot entirely be attributed to a commendable wish to continue to provide for Dixie and Danielle. It also stems from his eccentric definition of racism. He makes the strained argument that "racism" is indeed a Western invention: other cultures were conscious of race, but only the West tried to make a science of it (because only the West had science, he adds in its defense). Hence "The End of Racism"—because science might show that human differences are due to culture.

A major problem with this thesis is that it makes racism a minor problem. Murders, riots, and discrimination against people of other races might continue merrily after the end of racism (thus defined) because they would not then be inspired—however faintly—by scientific classification. Indeed, when such offenses are committed today by non-Westerners—for instance, the expulsion of Asians from East Africa—they do not count as racist under Mr. D'Souza's definition. They are merely expressions of "ethnocentrism," which is a universal (and not always malign) human trait.

This definition smuggles in the liberal prejudice that racism involves accepting that there are such things as innate racial differences. By this test, Herrnstein and Murray are indeed racists. But what if they succeed in demonstrating that such differences exist? That would prove "racism" right, which would be awkward for D'Souza's thesis. The term "racism" should surely be restricted to bigotry, of which all three authors—and America in 1995—are innocent.

Perhaps to underline his innocence, Mr. D'Souza sounds the tocsin against white, er, ethnocentrists to his right. In particular, he reports on a 1994 conference organized under the auspices of Jared Taylor's newsletter American Renaissance. Since Mr. Taylor's newsletter does discuss innate racial differences in frank terms, it is reasonable to infer that controversial things were said. But Taylor and two of his speakers—Samuel Francis, then a columnist for the Washington Times, and Lawrence Auster, author of The Path to National Suicide—subsequently complained so forcefully of misquotation that Mr. D'Souza's publisher took the extraordinary step of replacing his book's first print run. D'Souza's over-zealousness may have arisen from a desire to distinguish himself firmly from those with overlapping but (in his view) odious opinions. Readers of his elliptical reference to Jared Taylor's 1992 Paved with Good Intentions may not realize that this book substantially anticipated D'Souza's dysfunctional-black-culture thesis.

Mr. D'Souza also flinches on the issue of immigration. Public policy since 1965 has created two new minorities, "Asians" and "Hispanics." Together they now outnumber blacks; sometime after 2050, if public policy remains unchanged, whites will no longer be the American majority, or (much earlier) blacks the largest minority. There is no precedent for this demographic transformation in the entire history of the world. At the very least, it must further intensify, and vastly complicate, American racial politics.

Oddly, D'Souza acknowledges this when he argues that affirmative action can no longer be saved by restricting it to blacks, because the new minorities would resent it. But otherwise his discussion of immigration is perfunctory. He merely repeats what seems to be the Beltway conservative line: immigration is not really high; we just need to juice up the assimilation mechanism. This is particularly ironic because there is a serious case that displacement by mass immigration has been a factor in the black catastrophe D'Souza deplores.

Such a serious omission leaves Mr. D'Souza's book looking like Hamlet without, if not the prince, at least the gravedigger.