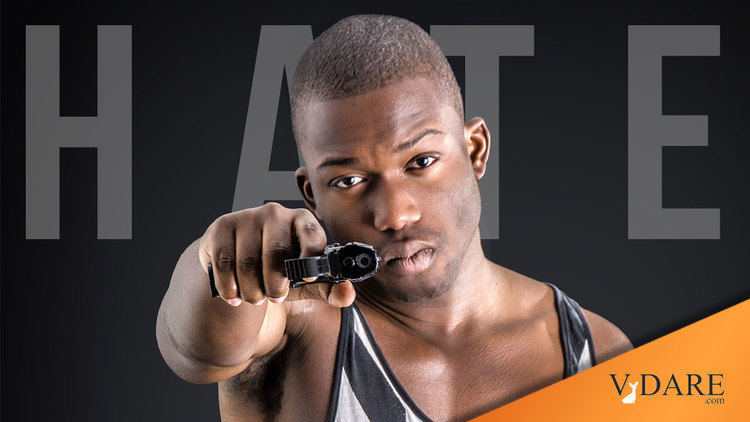 Only a week or so after a debate in the U.S. Senate about Sen. Ted Kennedy's hate crimes bill,[PDF of bill text] a real hate crime actually took place in New York City, but probably neither most of the senators nor most Americans even heard about it. As the New York Times headline described the crime, "Man Shoots Three in Rampage in East Village" Perhaps you can guess why the headline doesn't mention "hate."

"Hate" is not mentioned because, as the Times further reported, "a black man who has AIDS and who, as the police said, told investigators he was bent on killing as many white people as he could" did the shooting. Almost invariably, when blacks driven by hatred of whites commit mass murder or try to, it's not really a hate crime.

Indeed, this particular hate crime almost wasn't even news. After all, the "black man who has AIDS," named Steven Johnson, only shot three people and held "40 or so patrons" at the back of the restaurant "where they huddled in terror as he sprayed kerosene on them and threatened them by repeatedly flicking a barbecue lighter" before he was stopped. The New York Times buried the story on page A18, among the obituaries. The Washington Post entombed it in a news brief on page A6, just above another brief that informed us that floods in Ross, Minnesota, had reached the level of 23.5 feet. The conservative Washington Times, panting to catch up to the Post, stuck a news brief about it on page A10 on Tuesday. When blacks slaughter whites and rant "about white people and vow revenge for thousands of years of suffering," as New York Police Commissioner Raymond Kelly said witnesses described Johnson as doing, it's not news fit to print.

Indeed, despite the transparent racial hate that drove Mr. Johnson, the commissioner seemed reluctant to call it a hate crime himself. "It will be categorized as a bias crime, but," he explained, "this was such a bizarre event. This individual was clearly deranged, possibly as a result of his wife having died."

That's nice. By publicly speculating on the causes of Mr. Johnson's rampage and giving the public the benefit of his amateur psychiatric diagnosis, the commissioner may have established grounds for an insanity plea and for dismissing the role of anti-white hatred. It wasn't really hatred of whites that motivated Mr. Johnson, you see, because he was "clearly deranged" and his wife had recently died.

In 1998, when three white men murdered a black man in Jasper, Texas, for what seem to have been racial reasons, no one bothered to explain their motives, or speculate about their mental conditions, or mention that at least one of them had probably been gang-raped by blacks while in prison and therefore "was clearly deranged." In that incident, as in the murder of homosexual Matthew Shepard around the same time, there was one and only one motivation: hate.

Nor will Greenwich Village receive the blessings of visitations from Jesse Jackson, Al Sharpton, Louis Farrakhan or the small army of celebrities, demagogues and hungry politicians that descended on Jasper in the aftermath of its hate crime. Nor will the president or the Justice Department order the FBI to investigate "anti-white racism" in New York City. Why would they? That only happens when a white attacks a non-white. Why should it happen when whites are attacked by non-whites?

Perhaps most interesting of all, if and when debate on Sen. Kennedy's hate crimes bill is resumed, no Republican opponent of the bill will think to criticize it because what are today called "hate crimes laws" are really laws that criminalize any white assault on non-whites and thereby create a special legal privilege for non-whites. Nor will any Republican complain that the reluctance of police and prosecutors to call racially motivated violence against whites "hate" is itself an act of discrimination. During the recent debate on the Kennedy bill, the heaviest criticism that Republican "opponent" Sen. Orrin Hatch could come up with was that the bill failed to impose the death penalty for hate crime homicides.

The original concept behind "hate crimes" was that they would expose and penalize and help root out the "white racism" and "hatred" that supposedly permeate American society, and even today those who push them complain that there are far more hate crimes than are really counted by the police (they're not talking about hate crimes against whites, like the one in New York). But what hate crime laws have really done is expose the blatant double standard, the injustice and the transparent anti-white racism that the self-proclaimed "enemies of hate" have entrenched in our laws and increasingly, through the media, into our minds.