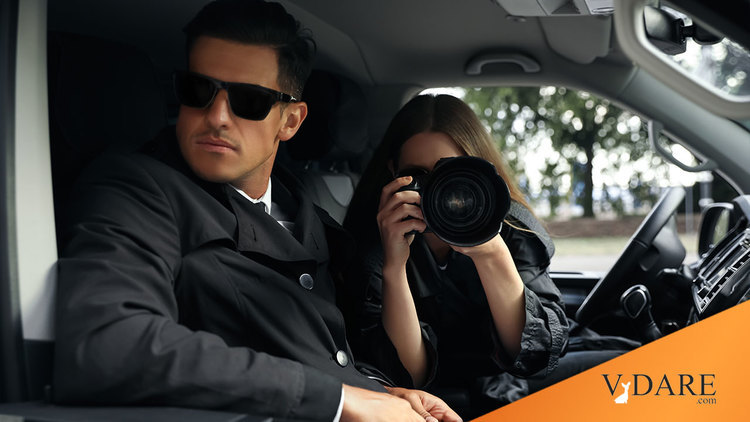 One result of government-created mass immigration in the wake of Sept. 11 is that personal and civil liberties may dwindle as "Homeland Security" swells.

Since there are legal limits on what government agencies like the FBI and the CIA can do to spy on the legal and non-violent activities of Americans, however, Homeland Security may come to include a few off-the-books agencies as well as those supposedly on the books.

So-called "watchdog" groups like the Southern Poverty Law Center and the Anti-Defamation League of B'nai B'rith rake in millions every year for the purpose of "tracking" what they call "extremist" activities—usually perfectly legal if sometimes bizarre political groups that the FBI and cops can't touch unless they're suspected of committing crimes.

Now, in the case of the Anti-Defamation League [ADL], a high-ranking official has acknowledged that they essentially help the FBI skirt the law and maybe even the Constitution.

David Friedman, director of the ADL's Washington office, told the press last week that his organization

"has played a vital role protecting the homeland by providing law enforcement officials with valuable information about suspected terrorists."

What is described as the ADL's "comprehensive database on extremist groups" contains all sorts of good stuff on Arabic and Muslim terrorist groups - as well as even more stuff on "domestic terrorists, including neo-Nazi and white supremacy groups."

Under guidelines and laws adopted in the 1970s, in the wake of such episodes as Watergate and various intelligence community scandals, limits were established on what intelligence agencies like the FBI and CIA could collect and how they could collect it.

What the ADL is acknowledging—perhaps unconsciously—is that it is helping such agencies evade those laws.

Mr. Friedman claims that law enforcement, including the FBI, which he admits the ADL has "helped,"

"are so burdened with the demands upon their time and so spread thin that they don't have the time to be studying and searching for additional information."

He neglects to point out that it's actually illegal for the FBI and certain law enforcement agencies even to have some kinds of "additional information"—so the ADL collects and keeps it for them.

It's far from clear how valuable that kind of service is. In the first place, if American voters and the Congress wanted these agencies to have more resources to collect more information, they'd probably provide it for them. Maybe they don't want them to have more on purpose, and maybe it's not really the business of the ADL to provide it anyway.

Moreover, what the ADL provides in the way of "additional information" isn't necessarily what the FBI needs, nor is it always reliable. The ADL, a Jewish organization, is understandably concerned mainly about anti-Jewish extremism, but anti-Jewish extremism may not be the biggest threat to the country that the Bureau and the cops need to know about. There are foreign terrorists, far-left terrorists, and environmentalist and animal rights terrorists, and there's no reason to think that what the ADL can provide the FBI about such groups is either more reliable or more useful than what it can get for itself.

As for reliability, a federal judge last year upheld most of a $10-million lawsuit against the ADL for falsely labelling a couple in Denver as "anti-Semites." A few years ago, the ADL outraged many mainstream conservatives by claiming that Pat Robertson's Christian Coalition was anti-Semitic and harbored "Nazi sympathies," despite the Christian right's strong support for Israel.

Unlike public law enforcement and intelligence agencies, the ADL doesn't have to answer to elected officials, so there's no check on it. It can fabricate or slant the "intelligence" it peddles to push public agencies in directions it wants them to go, not where they should be going.

Even when their intelligence is accurate, it still isn't necessarily useful. Mr. Friedman boasted that the ADL

"already had a profile on Timothy McVeigh before the Oklahoma City bombing by following anti-Semitic and anti-government movements."

That's swell. But obviously, the ADL's spying didn't help prevent the bombing - or even help catch those who committed it. So what good is it?

The only good that groups like the ADL seem to serve is their own, by impressing gullible and terrified donors with all the secret inside dope they rake up. By playing on the fears and fantasies of such people, the "watchdog" groups have raised millions for themselves.

The danger such groups present is not only that their slanted "research" and "intelligence" will misdirect and misinform professional law enforcement and intelligence services, but also that the law-abiding people they spy on and harass will wind up being smeared or framed for thoughts they never thought and deeds they never did.