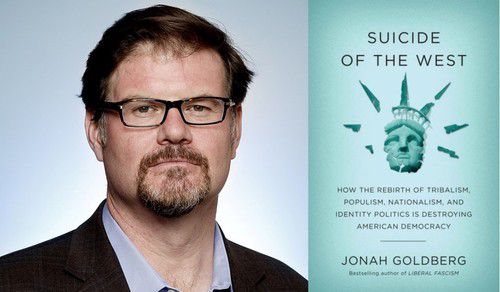 Gottfried on Goldberg: “Suicide Of The West”—Or Of "Conservatism"? 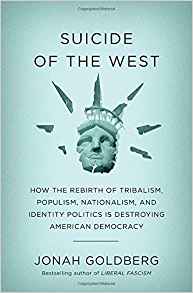 I wrote a lot in the early aughts about Jonah Goldberg’s apotheosis at National Review in the wake of William F. Buckley’s purge of immigration patriots like John O’Sullivan and VDARE.com Editor Peter Brimelow because I regarded Goldberg as a symbol and a symptom of the intellectual and moral degeneration of a magazine I once loved, and of the movement it purported to lead. Indeed, I gather that my habit of referring to the post-purge NR as “The Goldberg Review” caused Norman Podhoretz to ostracize Brimelow, once his close ally in Manhattan conservative circles, an unimaginable disaster for which I am deeply sorry. Subsequently, Goldberg apparently lost his editorship of NRO for some trivial reason of girly-boy intrigue. But Conservatism, Inc-ers never die. For his newest venture into deep thought, Goldberg has crassly stolen the title of James Burnham’s great work, Suicide of the West, published in 1964 at the height of the Cold War.

That is where the similarity ends. Unlike Burnham’s scalding indictment of liberalism as “the ideology of Western suicide,” Goldberg’s random opinions represent the very pathology that Burnham railed against. Goldberg hates national identities (although he makes an exception for Israel), opponents of the Deep State, immigration patriots, and those who imagine that democracy has something to do with the popular will. Rather his “conservative” view of democracy privileges public administration, the operation of multinational corporations, and socially sophisticated journalists such as himself.

One need only cite this passage from Burnham’s work to grasp the extent to which Burnham might have been thinking of someone like Goldberg when he described the quintessential liberal:

"Liberalism has always stressed change, reform, the break with encrusted habit whether in the form of old ideas, old customs or old institutions. Thus liberalism has been and continues to be primarily negative in its impact on society: and in point of fact it is through its negative and destructive achievements that liberalism makes its best claim to historical justification." 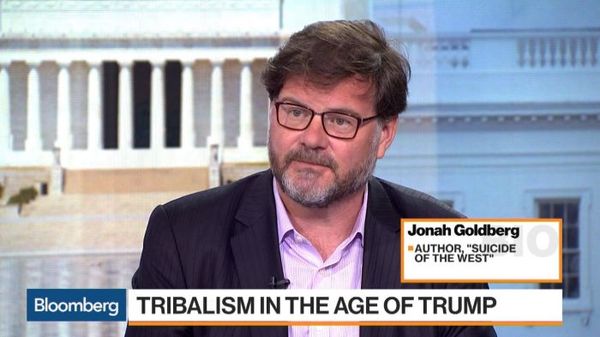 By now, however, Burnham’s Leftist hallmarks are “conservative” positions. After all, Goldberg’s book, which abounds in the Leftist virtue-signaling mandatory for Main Stream Media Token Conservatives, is being sold by “conservative” book clubs. It is also featured in a Crown Forum Series devoted to conservative thought (whose editor pointedly refused to correspond with me about a book proposal).

For those who may doubt whether the author is an authorized “conservative,” one need only turn to National Review, a publication at which Goldberg still holds an editorship, or else watch him jaw with other Fox News Allstars as a designated Man Of The Right.

I regard Goldberg as a prime example of the near-total ideological primacy of the Cultural Marxist Left. We are living in a time and place in which what would be crazy-Left up until about two generations ago is assigned a “Right-Wing” label, in order to keep alive a dialectic that is transparently phony. 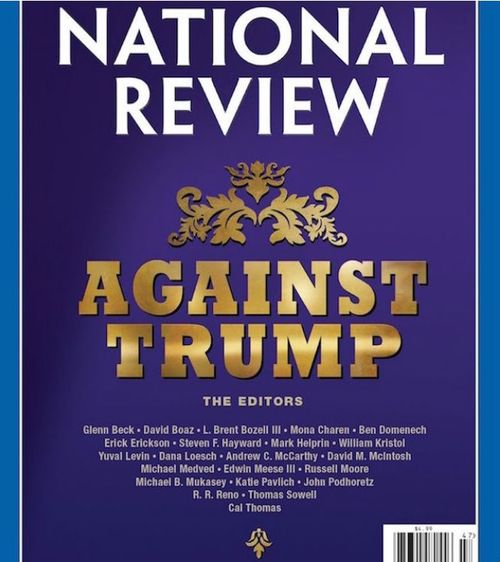 In about a ten-page digression into the nature of conservatism—his entire book is really nothing more than a series of digressions—Goldberg identifies “conservatism” with resisting Donald Trump. The U.S. President, whom Goldberg with other Never-Trumpers has inflexibly opposed, is described as a vulgar throwback to the 1930s “on both sides of the Atlantic.” People back then (let’s guess who they were!) believed “decadent Western capitalism and ‘Manchester liberalism’ were inadequate to the challenges of the day.”

All of this coming from Goldberg is utter chutzpah, considering that he now happily accepts massive social engineering in order to overcome “discrimination” against certain groups.

His version of Suicide Of The West indicts—in what by now is neoconservative ritual—Bismarck, the Prussian state and the administrative model of late nineteenth century Germany. All these pernicious forces allegedly laid the conceptual foundations of American managerial democracy.

But in fact this development was by no means due mostly to malignant Germans. Parallel developments took place at about the same time in most Western states that had introduced universal suffrage and in which the populace as well as political elites believed in a “science” of administration.

If Goldberg had deigned to read my work on the subject (which I wouldn’t expect him to given my unpopularity among his employers), he might have understood how widespread the growth of the democratic administrative state was in the decade before the First World War. Curiously some of the most zealous supporters of an expanded American welfare state, like Herbert Croly, Thorstein Veblen, and (after a youthful infatuation with Hegel) John Dewey, were by 1914 rabidly anti-German. In a heavily-researched study “World War One as Fulfilment: Power and Intellectuals,” Murray Rothbard showed how Anglo-American progressives presented World War One as a struggle between their Social Democratic project and German authoritarians who only pretended to believe in the same ideal.

Although Goldberg deplores the beginnings of our Administrative State, he has no trouble supporting some of its recent expansions. For example, he offers these impromptu opinions after telling us how thoroughly wicked the creators of the welfare state were:

Freed slaves certainly did deserve forty acres and mule (at least!), as many post-Civil War Radical Republicans proposed. Similarly, the early affirmative action programs targeted specifically to blacks in the wake of the Civil Rights Acts have intellectual and moral merit.

This kind of inconsistency runs through Goldberg’s tome. Although he vehemently objects to America’s early welfare state, later broad government interventions intended to overcome “discrimination” are perfectly fine with him. And, of course, Goldberg joins the post-Civil War Radical Republicans in calling for punishing Southern whites during Reconstruction by taking away their property and giving it to blacks.

Goldberg grovels shamelessly whenever he turns to racial problems in the US. In contrast to the traditional Right, Political Correctness is OK with him, providing it doesn’t get too nasty—and It’s not quite clear at what point he would admit that occurs:

At its best, PC is a way to show respect to people. If black people don’t want to be called “Negroes,” it is only right and proper to respect that desire. If Asians object to “Oriental,” lexicological arguments can’t change the fact that it is rude not to oblige them.

But what if (when) Jesse Jackson, Al Sharpton or some other Civil Rights leader decides he doesn’t want people of color to be called “black” any longer because he finds it demeaning? Are we required to go on changing the name of a particular group that enjoys a high victim profile in order to show appropriate “respect”?

And why are certain other groups, like Southern white Christians and those who want to preserve ancestral monuments that the Left and (now) National Review don’t happen to like, not to be accorded the same sensitivity to group feeling?

Because in Goldberg’s eyes they’re not Left-certified victims that professional Token Conservatives know they must acknowledge.

Thus Goldberg predictably goes berserk attacking the "nativist and nationalist" Brexit voters, the supporters of the National Front in France, and “the story of Donald Trump’s victory” as part of a “new global crusade against ‘globalism.’ “Those who participate in this neo-Nazi enterprise are supposedly undermining democracy, like those Hungarians who overwhelmingly endorse what George Will has proclaimed an “essentially fascist government” in Budapest. [ George Will: What artifacts from Nazi murder machinery can teach the U.S. and the world now, MercuryNews, April 26, 2018]

What this means: democracy can only survive if citizens vote for neocon-approved candidates. Otherwise, assuming Will is correct, “Anti-Semitism” will be “coming out of the closet.”

I am intrigued how often Goldberg, who is essentially recycling conventional views interspersed with chunks of history that seem to have been extracted from a high school survey, uses the phrase “I tend to believe…”

Although he clearly shows no trace of research curiosity, he may have no professional reason to do so. And so he can get away with idiocies like this one:

I tend to believe that high levels of immigration, particularly skills-based immigration, are economically desirable policies. Also, the evidence that low-skilled immigration is a net detriment to the country is not as cut-and-dried as some claim. (The field of economics that studies immigration is shot through with methodological and ideological problems.)

Really! Are there no reliable studies (I’ve seen dozens of them) that show that low-skilled immigration impacts negatively on low-income earners in the US? And can’t most high-skilled positions that are available in the US be filled by those who are already here?

Not surprisingly what Goldberg “tends to believe” corresponds to the inclinations of the Koch brothers, Paul Singer and other patrons of National Review. (Full disclosure: I’m putting together an anthology on the funding sources of Conservatism, Inc.)

Goldberg inserts silly complaints about how academic Leftists diss him and his pals from National Review, like Kevin Williamson, when they pop up at universities to speak on “conservative” issues. (I note he  did not condemn the disruption of my own recent lecture at Hamilton College.)

Personally, I can’t imagine what “conservative” teaching Goldberg could possibly convey during his sojourn in academe. His book conspicuously avoids taking hard conservative stands on anything. When he complains about the breakdown of marriage, he noticeably stays away from gay marriage, which he has already praised as a good thing. [A banner day for gay marriage on the right, By Jennifer Rubin, Washington Post, March 15, 2013] Instead Goldberg blandly chides those who live in “open marriages” and coyly alludes to his own marital bliss—as the husband of Nikki Haley’s speechwriter, Jessica Gavora. [Why Is Nikki Haley Still Trump’s UN Ambassador?, by Philip Giraldi, American Conservative, July 7, 2017]

In the acknowledgements he lists Jessica as his “best confidante, friend, and partner.” Perhaps it is this “partner” whom we should blame for Jonah’s egregious book of opinions and recycled historical platitudes.

A friend has described Goldberg’s enviable career as the “curse” inflicted on us because his mother Lucianne (of Lucianne.com) betrayed the trust of Monica Lewinsky and ratted out Monica’s secret affair with Bill Clinton to Republican operatives. Because of this betrayal, Lucianne’s self-important son was launched on a legacy path as a “conservative” luminary, the end of which is not yet in sight.

But this curse has not worked the same way as the fate that befell the subjects of Greek tragedies or those who sinned in Hebrew Scripture. There, the offenders and their descendants suffered the consequences of evil acts. Here the son of the betrayer of confidences is lavishly rewarded, as the beneficiary of his mother’s act, and the rest of us are made to endure his insufferable presence.

The older idea made much better sense.

Paul Gottfried [ email him ] is a retired Professor of Humanities at Elizabethtown College, PA. He is the author of After Liberalism, Multiculturalism and the Politics of Guilt and The Strange Death of Marxism His most recent book is Leo Strauss and the Conservative Movement in America.