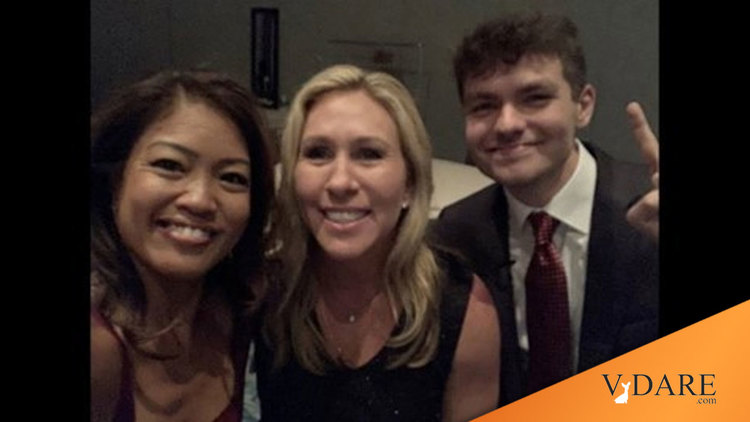 Last weekend’s AFPAC III was an enormous success. Some 1200 people attended Nick Fuentes’ nationalist alternative to CPAC. Multiple elected officials participated and, although Regime Media journalists were banned because they would have leaked the secret location to Antifa, it drew a large amount of coverage in the middle of a war. That’s an impressive feat. However, the response from the Republican Party was hysterically negative. The backlash to this massive nationalist event shows the GOP still hasn’t learned valuable lessons from the Trump era: they can’t resist cucking.

Fresh calls were made to censure Gosar and Greene, both of whom have already been removed from committee assignments in an unprecedented totalitarian move by the Democrat-controlled house [Over 12K Christians Urge Greene, Gosar Censure for White Nationalist Event, by Jason Lemon, Newsweek, March 3, 2022]. Gosar was censured last year over a joke video he shared. Wendy Rogers was censured by the Arizona Senate for her speech at AFPAC [Arizona Sen. Wendy Rogers censured by Senate, by Stacey Barchenger et al., Arizona Republic, March 1, 2022]. And RINOs in Idaho are calling for McGeachin to resign over her video-recorded message at AFPAC [Take Back Idaho calls for Idaho Lt. Gov. McGeachin to resign, KTVB, February 26, 2022].

Prominent Republicans were harsher on their party members who spoke at AFPAC than they were on Black Lives Matter rioters. Here are some of the lowlights:

But it wasn’t just the establishment that condemned the AFPAC speakers—so did allies of Greene and Gosar. “I do not apologize for other members and what they say or what they do. I do not support white supremacists, like Nick Fuentes, period,” said Colorado Rep. Lauren Boebert, a close ally of Greene. Texas Rep. Chip Roy said Fuentes is an “asshole” and said no Republican should associate with him [Greene and Gosar increasingly isolated in Hill GOP after speaking at white nationalist event, by Burgess Everett and Olivia Beavers, Politico, February 28, 2022].

The AFPAC-affiliated Republicans, however, have not apologized for appearing at the event. Gosar and Rogers didn’t bend to the outrage at all. Gosar vowed on Gab that he wouldn’t back down and congratulated his fellow speakers. Rogers said she was very proud of the event and declared she will not apologize for being white.

I will not apologize for being white. Hit me all you want.

My speech at AFPAC was spot on.

At AFPAC, the state senator said that the young patriots in attendance were the future of America.

Greene and McGeachin took a less staunch approach. Greene said she was just speaking at an event with a lot of young conservatives and emphasized that she does not endorse “white nationalism.” Incredibly, she said she didn’t know who Nick Fuentes is and also that she opposes all forms of identity politics. But she refused to apologize or directly disavow [Marjorie Taylor Greene defends attendance at white nationalist conference, by Brad Dress, The Hill, February 26, 2022].

McGeachin adopted a similar strategy. In a statement, she said:

"I was invited to submit a video to AFPAC, and I took the opportunity to share my views about these vital America First policies.”

“I do not and have never supported identity politics or other discriminatory views that only seek to divide us and not unite us. Anyone who actually listens to what I say or who pays attention to what I've done in my many years of service knows this is true" [Idaho Lt. Governor McGeachin responds to calls for her to resign, by Brian Holmes, KTVB, February 28, 2022]

The backlash has spooked other America First–leaning candidates into denouncing Fuentes. Trump-endorsed Joe Kent, who is primarying Washington state Rep. Jaime Herrera Beutler after she voted for Trump’s impeachment, tweeted an over-the-top condemnation of America First in response to an opponent’s attack, repudiating Fuentes’ endorsement. It was not well-received by patriots.

My opponents are again spreading lies about me.

I strongly condemn Nick Fuentes's politics, especially in regards to our ally Israel.

I ignored his invitation to speak at his recent conference in Orlando, and I am not aware of nor do I accept any endorsement from him.

I stand by this. No one be should de-platformed or put on a no fly list for their political ideas.

I don’t want Fuentes’s endorsement due his focus on race/religion, the fights he’s picking are counter productive, this is not my message of inclusive populism. https://t.co/FyQvSAeLoa

The Republican response shows their addiction to cucking. Democrats never engage in these denunciations of their own side to please journalists. They will defend Cori Bush, Ilhan Omar, and Rashida Tlaib no matter what they say. They defended former congressman and now Minnesota Attorney General Keith Ellison for once supporting a black ethnostate. They dismissed criticisms of deputy U.S. attorney Kristen Clark—who apparently played a role in attempting to deplatform VDARE.com—over her advocacy of black racial supremacy in college. Democrats confirmed with no qualms Tracy Stone-Manning as the director of the Bureau of Land Management last year, even though she in the past sympathized with eco-terrorism [Biden must pull Stone-Manning BLM nomination if he's serious about domestic terrorism, by John Barrasso, USA Today, July 19, 2021].

The proper response for Republicans in these situations: ignore Regime Media howling. By disavowing Greene, Gosar, and the others, the GOP simply stimulates their enemies. The Left sees panic, and attacks even more. They demand more denunciations, more punishments, and more declarations of loyalty to “anti-racism.”

If Republicans just ignored these stories, they would lose their potency. There is no reason for Republicans to capitulate to journalists, throw their allies to the wolves, and help their political enemies.

There is a big Whitepill in this story—namely, AFPAC cannot be ignored. As CPAC refuses to address the key issues of immigration and race, more conservatives will seek an alternative. AFPAC’s large attendance and high-profile speakers shows it’s a serious event that can grow even bigger in the future.

There will come a time when Republican leaders beg to speak at AFPAC, rather than shriek to CNN about it.