The administration of President Donald Trump and the Republican majority he relies upon to avoid impeachment is in critical danger. The Democrats have become more extreme and forthrightly anti-American, particularly in California, leading to a feeling of complacency among Republicans and Conservatism Inc. mouthpieces who simply assume Americans will react against it. [California Dems’ hard-left turn could be the whole party’s future, New York Post, March 2, 2018]. Yet the Democrats could be poised to take back Congress. And perhaps even more importantly, the Main Stream Media and Silicon Valley are engaging in a sweeping crackdown on free speech designed to eliminate pro-Trump alternative media sources. The passivity of the GOP in response to this escalating Totalitarian Leftist  offensive raises the horrifying possibility the 2016 election will be squandered—leaving with patriots with  nothing to show for all their sacrifices.

Of course, American patriots are in a difficult position because the nation-state they are defending is already Balkanizing along ethnic lines. Last year saw the national anthem at NFL games become controversial; last month, the NBA began playing a separate national anthem for blacks for Black History Month. [Several NBA Teams Celebrated Black History Month By Playing ‘Negro National Anthem’ At Games, by Warner Todd Huston, Breitbart, March 1, 2018] In the San Francisco Bay Area, the national anthem has been banned from pep rallies because it is supposedly “outdated and racially offensive”. [High school bans ‘outdated and racially offensive’ national anthem from rallies, by Victor Morton, Washington Times, February 13, 2018] In Vermont, a predomantly white (of course) public school is now flying the Black Lives Matter flag. [This Vermont school is flying the Black Lies Matter flag. Meet the students who made it happen. By Aaron Morrison, Mic, March 1, 2018]

And as each one of these illegal voters is disenfranchising an American citizen when they break the law, it makes Robert Mueller’s investigation of supposed foreign interference in American elections laughable on its face [Mueller eyes charges against Russians who stole, spread Democrats’ emails, by Ken Dilanian, William Arkin, and Julia Ainsley, NBC News, March 1, 2018]

Indeed, the real reason MSM journalist/ enforcers are cheering on Mueller’s investigation isn’t hatred of Trump, but a hatred of those who promote viewpoints that the MSM is desperately trying to suppress. YouTube is now censoring not just “Alt Right” accounts, but even center-right and classical liberal accounts, as well as Alex Jones’s Infowars [The Purge: YouTube mass-censors conservatives, new right, classical liberals, by Allum Bokhari, Breitbart, March 1, 2018]. This is not surprising: the Daily Caller confirmed the Cultural Marxist vigilante group the Southern Poverty Law Center is now among those determining which content creators are to be muzzled [SPLC Confirms They’re Helping Police Videos On YouTube, by Peter Hasson, March 1, 2018].

Thus, the Republican Party is already fighting an uphill battle with the 2018 midterms, not just because the president’s party traditionally loses the midterms, but because the MSM that has whipped the Democrat base into a state of hysteria has simultaneously successfully suppressed many of the alternative media voices that enabled President Trump’s victory.

California may be far-Left, but it is also a de facto one-party Democrat state. Texas is also showing signs of turning, if not blue, at least purple as changing demographics begin to have their effect [Ahead of Texas primary, early signs of a 2018 Democratic Surge, by Jessica Taylor, NPR, March 4, 2018]. Democrats also now have a double-digit advantage in the generic party ballot by one count. [Dems surge in generic ballot as economy fades from spotlight, by Jonathan Easley, The Hill, February 28, 2018] It’s naïve to simply assume normal Americans will react against far-Left radicalism when a monolithic media chorus is telling them that it is President Trump who is unhinged.

Which is especially striking because Democrats ‘ideological extremism, or what really should be called anti-white hatred, is becoming more apparent. Every week brings a new revelation about how Keith Ellison, the antifa-endorsing, terrorism-tied, black nationalist Vice Chair of the Democrat Party has far more extensive ties to Louis Farrakhan and the Nation of Islam than previously thought [‘An Enemy Within’ – Keith Ellison Exposed, WND, January 26, 2017]. In his most recent harangue, Farrakhan outlined how Ellison used to sell the Nation of Islam’s newspaper [Farrakhan’s Ellison, Powerline, March 1, 2018].

But the collective shrug from the MSM is in startling contrast to the periodic fits of hysteria over tenuous links between white nationalists and Republican officials. 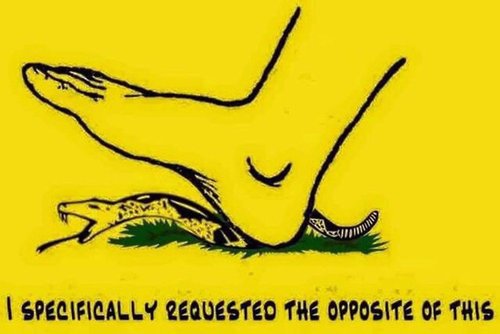 In the response to all this, the Republican Party is missing in action. It’s easy to forget the GOP controls the White House and both chambers of Congress when the main topics of discussion in Washington D.C. are gun control, amnesty for illegal immigrants, and more brinksmanship with Russia in Eastern Europe [U.S. steps up military assistance to Ukraine with plan to sell 210 anti-tank missiles, by Josh Lederman, Chicago Tribune, March 1, 2018]. One is reminded of the cartoon with the "Don't Tread On Me" snake on the Gadsden Flag being trodden upon, captioned, “I specifically requested the opposite of this.”

Republicans seem to be taking for granted tax reform will allow them to keep the majority. But this is dangerous when the second-biggest contingent in the Republican base itself wanted higher taxes on the wealthy, not lower.

Yet it’s not too late. President Trump is playing footsie with Dianne Feinstein on gun control and demoralizing the GOP base, but he could turn in a new direction and champion obvious, popular measures. These include a remittance tax (which would actually make Mexico pay for the border wall). Another would be pushing for English as the official language. Another would be mandating all public schools which receive federal money must fly the American flag, the state flag and no other flags. Finally, a pusher for commons sense Voter ID (based on the Mexican model and explicitly defended on those grounds) would also put the Democrats on the defensive.

The victory of Donald J. Trump in the 2016 was the greatest political upset in American history. Yet in retrospect, it was obviously coming. Hillary Clinton was uninspiring, corrupt, and most of all, complacent. The final weeks of the election were dominated by MSM  stories about how a Trump victory was not only unlikely, but impossible [Trump’s path to an electoral college victory isn’t narrow. It’s nonexistent, By Stuart Rothenberg, Washington Post, October 18, 2016].

But now, despite repeated victories by Democrats in local special elections, an MSM crackdown on nationalist allies, and tangible, tangible evidence of an impending “blue wave,” the GOP seems as stupefied as a cow on a slaughterhouse conveyer belt. Thus, for example, it credulously accepted the now-discredited Left/ MSM Narrative about last August's Charlottesville Unite The Right rally, although this was plainly aimed at repressing the Right. Only President Trump, to his great credit, balked.

If Trump intends on finishing his term and Speaker Ryan wants to keep his gavel, they need to act on the political opportunities lying before them and act in defense of America’s national identity.

If they do not and deservedly go down to defeat, it will be more obvious than ever the purpose of the Republican Party, and Conservatism Inc., is to lose on purpose and die gracefully.