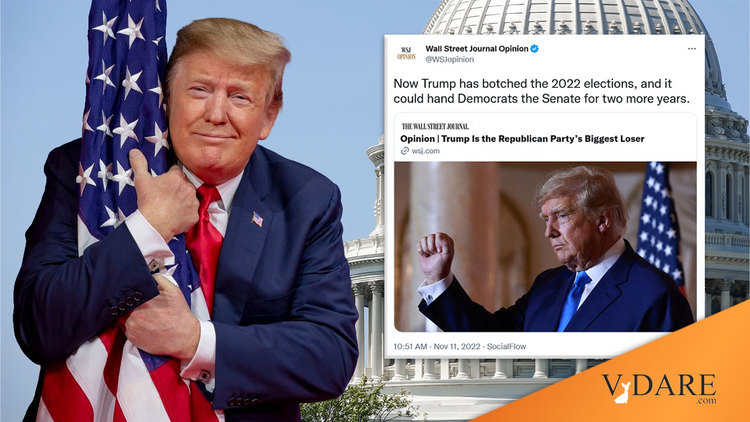 Earlier, by Peter Brimelow, 2015: GOP Should "Thank Heaven Fasting" For Trump But Instead Plans To Shoot Self In Testicles

The GOP Establishment has fingered a culprit for the disappointing midterm results: Donald Trump. GOP leaders and Conservatism Inc. pundits claim the American people want something different. They insist Trump’s candidates were sure losers and the party should no longer support such politicians. Many think this argument is just about Trump the man, but it’s not. The GOP Ruling Class wants to rid the party of Trumpism and resurrect its Business First program. Instead of Trumpism without Trump, the elites want a GOP without Trumpism.

The Wall Street Journal made this clear in an editorial the day after the election. The newspaper didn’t just blame Trump—it blamed the candidates he backed. “What will Democrats do when Donald Trump isn’t around to lose elections?” the editorial board asked:

We have to wonder because on Tuesday Democrats succeeded again in making the former President a central campaign issue, and Mr. Trump helped them do it.

Trumpy Republican candidates failed at the ballot box in states that were clearly winnable. This can’t be what Mr. Trump was envisioning ahead of his “very big announcement” next week. Yet maybe the defeats are what the party needs to hear before 2024.

Looking at the Senate map, the message could not be clearer. In New Hampshire, the Trump-endorsed Republican Don Bolduc lost to Sen. Maggie Hassan, 53% to 45%, as of the latest data. At the same time voters re-elected Republican Gov. Chris Sununu by 16 points.

Now Trump has botched the 2022 elections, and it could hand Democrats the Senate for two more years. https://t.co/XNawkLND3T

The WSJ editorial called Bolduc “kooky,” then castigated Trump for his supposedly terrible endorsements. But these included moderate Mehmet Oz and the former football player Herschel Walker, although in fact neither of them ran on Trumpism. And the WSJ attacked even those Trump endorsements who did run on Trumpism and won. Blake Masters was a terrible candidate, the editorial claimed, and the party should’ve run moderate governor Doug Ducey instead. Granted, J.D. Vance won, the editorial board opined, but his margin of victory was too low. The WSJ also attacked Joe Kent and John Gibbs; the Never Trumpers they beat in the primaries should’ve been the nominees.

Not coincidentally, the WSJ’s preferred alternatives to Trump’s candidates were generally terrible on the critical issue of immigration. Michigan Rep. Peter Meijer, whom Gibbs defeated, championed Amnesty for illegal-alien farm workers. He also voted for Trump’s impeachment. Washington Rep. Jaime Herrera Beutler, whom Kent defeated, was another Amnesty supporter who voted for Trump’s impeachment. Masters bested businessman Jim Lamon in the primaries. Lamon talked tough on illegal immigration, but declared America has “the most beautiful, ample legal immigration system on the planet.”

In contrast, all four of the Trumpist candidates whom the WSJ editorial attacked campaigned on restricting legal immigration. The WSJ Edit Page is a notorious cesspool of fanatical immigration enthusiasts—it has long advocated a constitutional amendment that “there shall be open borders”—and it obviously has unspoken differences with these candidates besides their support from POTUS 45.

The WSJ ignored Arizona gubernatorial candidate Kari Lake, possibly believing she would win her contest. But she has, apparently, lost, which makes her another target for Establishment attacks. Lake was not quite Masters-tier when it came to immigration, but she was a solid champion against illegal immigration and promised to declare the border crisis an invasion if she became governor. In contrast, her chief GOP primary opponent, Karrin Taylor Robson, supported in-state tuition for illegal aliens [Arizona Voters Approve GOP-Led Law Giving In-State Tuition to Illegal Aliens, by John Binder, Breitbart, November 15, 2022]. The Establishment wanted Robson instead of Lake.

Of course, Senate Minority Leader Mitch McConnell agrees. McConnell saw Trump candidates rather than Trump’s presence as the issue. Earlier this year, he undercut Trump’s primary candidates as “goofballs” and mustered his resources to defeat them [Inside McConnell’s Campaign to Take Back the Senate and Thwart Trump, by Jonathan Martin, New York Times, February 13, 2022]. McConnell tried to get Gov. Ducey to take on Blake Masters in Arizona, to no avail. He also put millions behind Alaska Sen. Lisa Murkowski against a Trump-backed GOP challenger. And McConnell refused to give money to Blake Masters when he won the Republican primary in Arizona, even though McConnell’s powerful Senate Leadership Fund is supposed to back Republicans in tough races.

Significantly, at the same time McConnell’s SLF fully supported Trump-backed candidates, such as Oz and Walker, who were not Trumpists. It appears that McConnell’s problem wasn’t with Trump endorsements as such. It was with Trumpism.

The lack of funding for these candidates certainly helps explain why they lost. Masters was outspent by Democratic incumbent Mark Kelly by an astonishing $74 million to $9 million [How many Filiberto’s burritos Arizona Senate race spending could buy, by Jessica Boehm, Axios, November 9, 2022]. Kent also struggled with a massive funding gap. Nearly $3.5 million in outside spending went toward opposing him. Only $3,500 in outside spending went toward opposing the Democrat. A lot of money was raised just to beat Joe Kent, but not much was raised to help him win. Gibbs also received lackluster financial support, with his Democratic opponent raising over three times more near the end of the campaign [Big-name West Michigan donors absent from Trump-endorsed candidate’s campaign finance filing, by Brian McVicar, MLive, October 21, 2022].

The people who control the purse strings, Senate Leadership Fund, Mitch McConnell—McConnell decided to spend millions of dollars attacking a fellow Republican in Alaska instead of helping me defeat Senator Mark Kelly.

Con Inc. institutions gloated over the losses by Trump candidates and defended McConnell. From National Review:

Reminder: This is a supposedly conservative publication that seems thrilled with the midterm losses—because it’s more important to defeat Trumpism than it is to win elections.

The Establishment moved to reassert itself after the midterms. Despite being responsible for the disappointing results, McCarthy and McConnell ensured they kept their jobs as leaders of the congressional GOP. Both easily defeated challengers. An Establishment Republican, Tom Emmer, beat an America First Republican, Jim Banks, for the job of House party whip [House GOP picks Emmer as GOP whip, Scalise as leader, by Emily Brooks and Mychael Schnell, The Hill, November 15, 2022]. Reanimated corpses of the old GOP such as former House Speaker Paul Ryan and former New York Governor George Pataki have climbed out of their coffins to tell the party what it should do now [Paul Ryan calls former President Donald Trump ’drag on our ticket'’ by Caroline Reinwald, WISN, November 10, 2022].

Some point to Florida Governor Ron DeSantis as proof you can have Trumpism without Trump. But DeSantis, who has made interestingly skeptical noises about legal immigration, is a lone exception to what the Establishment wants for a Trump-free GOP. The Republicans whom Trump candidates beat or Trump refused to endorse were more of the Paul Ryan mold.

Take, for instance, Colorado Senate candidate Joe O’Dea. O’Dea was touted heavily prior to the election as the perfect candidate to defeat a Democrat incumbent, because he was just so dang moderate. Part of his moderation included open support for Amnesty—an idea most cucky Republicans avoid supporting in public [Michael Bennet and Joe O’Dea both agree the US needs immigration reform, Caitlyn Kim, CPR, November 3, 2022]. He also said he didn’t want Trump’s support [Colorado Republican Senate nominee fires back at Trump, by Manu Raju, CNN, October 17, 2022].

But despite running the ideal campaign according to the GOP consultants, he lost by nearly 15 points to Sen. Michael Bennet.

It’s strange no one brings up O’Dea as one of the failures of the midterms, yet every Con Inc. apparatchik declares Masters—who only lost his race by four points—a straight loser.

For that matter, no one mentioned that GOP Establishment darling Martha McSally lost Arizona Senate races by comparable margins to Blake Masters, not once but twice, in 2018 and 2020.

Nor does anyone mention that the GOP consultants’ much-touted ploy of running minority candidates met with utter disaster in 2022.

And, of course, everyone has forgotten that it was not Trump but Mitch McConnell’s determination to run an Establishment GOP campaign in the 2020 Georgia Senate runoffs, not mentioning the Biden Regime’s imminent Border Rush / Amnesty drive, that cost the GOP its Senate majority in the 116th Congress. (This is probably about to happen again.)

For all Trump’s faults and bad endorsements, a nod from him is one of the few ways an America First candidate can defeat an Establishment candidate. The Establishment candidate is guaranteed to have more money and more institutional support. A Trump endorsement evens the odds. Without it, Vance, Masters, Lake, Kent, and Gibbs would never have won their primaries. Trump also remains capable of endorsing outsider candidates against party insiders, particularly if the party insiders have gone against him.

Trump is still the strongest figure to push for the America First National Conservative transformation of the GOP. If he were removed from Republican politics, it would be much more difficult for insurgents to challenge the status quo.

The GOP Establishment fully understands that. That’s why they want Trump and Trumpism excised from the party.

No more Blake Masters—Republican voters will be stuck with more Joe O’Deas instead.