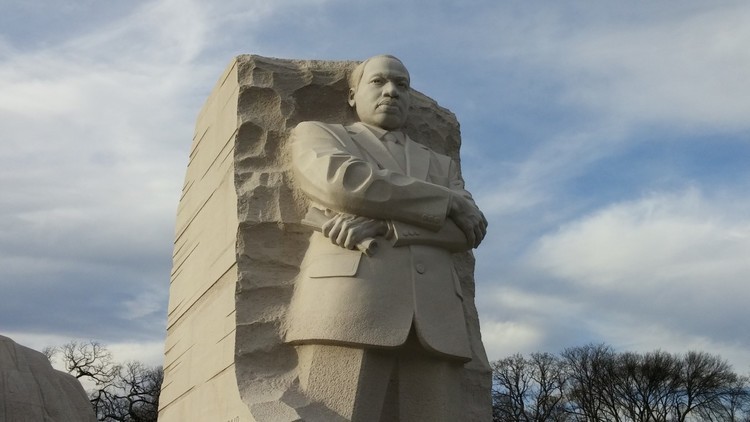 Hand it to Glenn Beck. He might be a nut, but he sure knows how to send the Civil Rights industry into a rage: He will hold his Restoring Honor rally and unveil his 100-year plan for America on Aug. 28 at the Lincoln Memorial—which just happens to be 47th anniversary of Martin Luther King's plagiarized I Have a Dream speech.

The same day, Al Sharpton and his crowd of professional agitators will also gather on the mall for a Celebrate the Dream shindig that will include unveiling a People's Memorial to the man Himself. Designed by Michael Murphy, a (white) art professor at Georgia College and State University, it is a rather clever device. Seventy-seven feet wide and 37 feet tall, walking around its accordion-like folds reveals different images of King and a variety of his words of wisdom.

Beck, of course, says his rally's timing is mere coincidence. And it's a darn good thing his rally didn't coincide with a more important—for "civil rights" organizers—deification of MLK: the installation of his permanent memorial on the Mall, which was supposed to be happening right about now.

This gargantuan monument was supposed to have been on the way from China in May. But Greece, which had promised to deliver it, has had to back out of its commitment because of the economic meltdown there

The statue was then supposed to arrive no later than July. But that apparently hasn't happened either. [Greece's economic crisis strands sculpture for Washington's Martin Luther King Jr. memorial, By Michael E. Ruane, Washington Post, June 7, 2010]

Such is this thing's importance that the memorial website set up a "construction cam" for watching (presumably) Chinese workers put the effigy together. (Some of the heavy lifting will be done by a non-union construction company, most of whose Hispanic workers "speak little English.")

Construction began at the site for the statue in late December. Apparently, sculpting the monument itself was among the many jobs Americans won't do, and so required the outsourcing to China.

The monument consists of:

"159 huge blocks of granite…includ[ing] one block that bears the likeness of Martin Luther King Jr. and the dreams of generations of African Americans.

"The other blocks—which weigh as much as 55 tons each—make up the rest of the mammoth, three-part sculpture that is the centerpiece of the $120 million memorial to the slain civil rights leader. Assembly is scheduled to begin this year….

"It will require erecting one of the biggest figurative sculptures in Washington—a three-story-tall relief of King—atop a landscape of compressed mud. (The carving of King's head alone weighs 46 tons.)

"It will require driving more than 300 concrete piles as deep as 50 feet through the dirt to support the monument's foundation. This must be done without damaging the adjacent Tidal Basin seawall, which has already sunk into the muck at the Jefferson Memorial across the basin. A multimillion-dollar seawall repair project is underway there…

"The three main elements resemble a simulated stone mountain from which the center has been carved out and placed by itself in the foreground.

"The centerpiece—named the Stone of Hope for a line from the 1963 speech—is 30 feet 8 inches tall and bears the image of King in a business suit with his arms folded.

When this monument is erected, the meme will be Obama's fulfilling King's "dream". We'll get 24/7 King-Obama adulation on the news channels. Endless audio and video of his speeches. Grainy films of man-eating police dogs and club-wielding cops. King at the Lincoln Memorial. Obama taking the oath. King rising above the dead white males on the national mall.

VDARE.COM has carried many articles questioning the received view of Dr. King:

But there is a sense in which the current conventional wisdom is right. President Obama may well represent the fulfillment of King's "dream"—because he, like King, is fundamentally a man of the radical left. (Which also means that it's entirely appropriate for Beck to step on his anniversary).

In a recent interview with the Young Turks radios show, Julian Bond, a King spear carrier, recently flatly denied the Mount Vernon Mafia's revisionism that King was a Republican conservative:

"We've transformed him into kind of a cut-leaf figure, someone who had a dream and spoke these magnificent words, but we don't remember the King who was the critic of capitalism who said to Charles Fager when they were in jail together in Selma in 1965 that he thought a modified form of socialism would be the best system for the United States. … So we've anesthetized him. We've made him into a different kind of person than he actually was in life. And it may be that that's one reason he is so celebrated today because we celebrate a different kind of man than really existed. But he was a bit more radical, not terribly, terribly radical, but a bit more radical than we make him out to be today."

King is the only American for whom a national holiday is reserved. The late Sam Francis explained what that would mean back in 1998:

"[T]he true meaning of the holiday is that it serves to legitimize the radical social and political agenda that King himself favored and to delegitimize traditional American social and cultural institutions—not simply those that supported racial segregation but also those that support a free market economy, an anti-communist foreign policy, and a constitutional system that restrains the power of the state rather than one that centralizes and expands power for the reconstruction of society and the redistribution of wealth….

The concrete sign of this was the penultimate line of the "benediction" for Obama's inauguration from Rev. Joseph Lowery, Kin's successor as president of the leftist Southern Christian Leadership Conference:

"Lord, in the memory of all the saints who from their labors rest, and in the joy of a new beginning, we ask you to help us work for that day when black will not be asked to get back, when brown can stick around—when yellow will be mellow—when the red man can get ahead, man—and when white will embrace what is right." (Emphasis added)

This and much worse has been standard fare from leftist blacks for some time. But it was likely the first time the exalted podium of a newly inaugurated president was exploited to denounce the white man as evil—a sign that what Francis correctly pegged as King's "racial ideology of social transformation and reconstruction" is.

But Americans who oppose King and the leftist agenda he represented, as well as the liberal destruction of the American economy via off-shoring and liberal free trade ideology, have one cause for amusement.

You might recall the episode of M*A*S*H in which Frank Burns and Hot Lips Houlihan commissioned a bust of Col. Sherman Potter. The Korean sculptor's rendition resembled…the Korean sculptor. 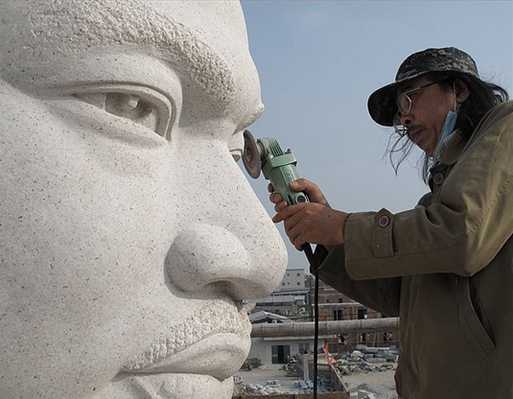 Similarly, King will resemble the Chinese sculptor who created him. A close look at the photo of his 46-ton noggin clearly reveals almond-shaped eyes. Life imitates art.

And, to adapt the excuse of M*A*S*H's fictional Korean, maybe King's resemblance to a Chinese gives him class.