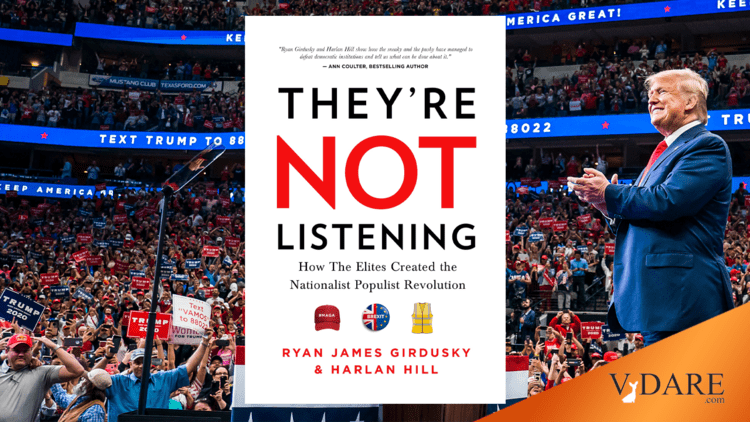 You need not be an astute political observer to know that 2016 was a seminal event in world history. In the United Kingdom, more than 17 million Britons voted to exit the European Union. The Brexit vote prevailed 52 percent to 48. Then Americans elected Donald Trump, a bombastic real estate tycoon who vowed to build a border wall with Mexico, ban immigration from Muslim-majority countries, and end wars and quixotic nation-building exercises in the Middle East and Central Asia. As authors Ryan James Girdusky and Harlan Hill show in They’re Not Listening: How the Elites Created the Nationalist Populist Revolution, years of anger and the absolute refusal of global elites to listen to their working and middle class citizens fomented those cataclysmic political events. 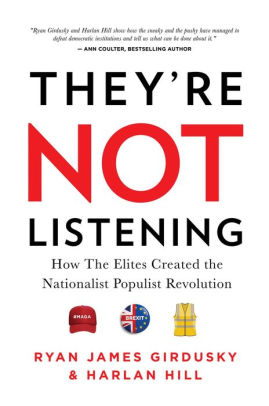 They’re Not Listening attempts to characterize nationalist populism and provide an historical overview of its global appeal. Neither Girdusky nor Hill is a historian; in fact, both men are college dropouts (like Bill Gates!) who have turned to journalism and political consultancy. Hill began his public life as a Democrat, but things changed for him when he realized that the Democrats were not the party of working people, but rather the party of Woke white liberals in what author Michael Lind calls, in his book The New Class War, America’s hub cities (think New York, Boston, and Silicon Valley). Now both men are trying to rally the Republican Party to the side of nationalist populism.

What is nationalist populism exactly? They’re Not Listening answers that question in each one of its nine chapters.

The libertarian center-right calls many of these measures socialist, while the neoliberal center-left cries “fascism.” But whatever they’re called, nationalist populist economics are popular with the majority of the American (and European) electorate.

Terrorism and crime would be dealt with via internal security measures such as expanded police forces or the deployment of US soldiers on the country’s borders.

Girdusky and Hill show that Americans have voiced their opposition to mass immigration since the 1970s, but the Ruling Class elites in both parties have arrogantly refused to listen.

Immigration is not just an American problem. Illegal Congolese immigration in Angola, the authors report, inspired Angolan voters to press for deportations. The refugee inundation of Europe, which began after ill-conceived military adventurism in Libya and Syria by the West, led to the rise of nationalist populist parties in the UK, Germany, France, the Netherlands, and even super-tolerant Sweden.

Brazil and Chile have seen similar reactions too, even despite significantly smaller illegal immigrant populations.

While illegal immigration inspires easy soundbites, Girdusky and Hill want nationalist populist politicians and supporters to press for more restrictions on legal immigration—which VDARE has advocated from its beginning. Legal immigration to the United States, not illegal immigration, has led to the greatest peacetime demographic change in world history. Mass immigration weakens social trust between citizens along inter-racial and intra-racial lines. Mass immigration, legal and illegal, depresses wages for native-born American workers. The only people it benefits: large corporations and economic sectors addicted to cheap labor.

The most vocal defenders of mass immigration are cosmopolitan elites who do not feel the negative effects of it, such as de-industrialization, the loss of jobs and status, and  increasing suicide and drug addiction rates.

Girdusky and Hill also point out that white liberal elites tend to be the most vocal supporters of immigration because, unlike every other demographic group, they have a negative perception of their own race. This toxic combination of elite greed and self-loathing has done much to damage the social fabric of the United States.

They’re Not Listening is a clarion call for worldwide elites to listen to their voters. If they don’t, then Chapter Nine provides a dire warning:

If national populists don’t rise through normal democratic means, then they will gravitate to strong men who promise to completely dismantle the current economic and political system.

The age of authoritarianism might be around the corner. And it won’t be Trump’s fault but that of arrogant cosmopolitans.

They’re Not Listening is far from a perfect work. It is riddled with grammatical and editorial errors; the book’s jacket even features a blurb that misspells Girdusky’s name.

However, this is a well-researched polemic that features an astounding 689 footnotes. It is also a clear-eyed and brave book that couldn’t be timelier, although it written too early to address the Chinese Virus pandemic or the recent Floyd Hoax riots.

If for nothing else, They’re Not Listening must be applauded for trying to give Republicans a backbone and the courage to admit that yes, America has a unique culture and a unique people based on history, customs, and folkways.

It is not the sole creation of an 18th-century document. And it cannot necessarily be sustained by people from disparate backgrounds.