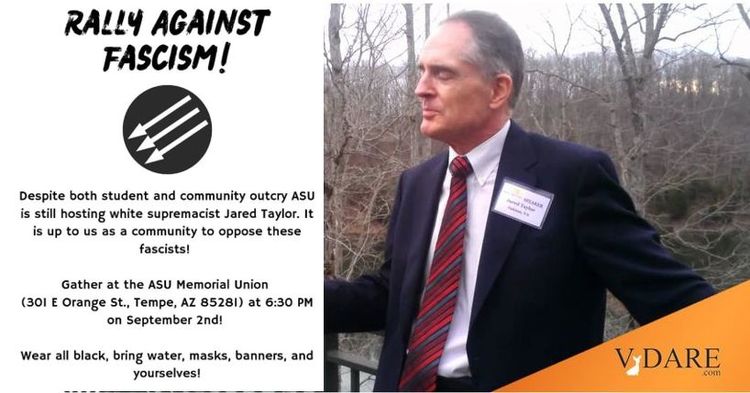 Reginald De Chantillon
A+
|
a-

Campuses are open to any speaker whom a student group has invited. ASU is a public educational institution that is committed to free, robust, and uninhibited sharing of ideas among all members of the University’s community.

A number of outside national conservative youth commentators, such as KaiClips and Dalton Clodfelter and  Tyler Russell at Cozy.TV, made their own Hajj to the event. proving that Jared Taylor’s and Amren’s movement has motivated a new generation. The result was a success for Freedom of Speech, White Identity, Jared Taylor, and American Renaissance.

The announcement by ASU CRU had caused consternation among the Establishment GOP (GOPe) and their objective allies on the Left. Both the neo-con ASU College Republicans (ASU CR) and far-Left revolutionary groups made public demands that the event be cancelled.

The Left unironically posted demands from non-white student groups to silence one man speaking in defense of the only racial class without representation: whites. But instead of having the desired outcome, this earned media attention triggered a rush of ticket purchases for the event on BAMM!! and Eventbrite. As a result, the original location was changed to accommodate the attendees and provide more protection for the audience.

Significantly, however, the event advertisement on Eventbrite and BAMM was subsequently deplatformed, proving once again that the mob and not free speech predominates in the public sphere.

Threats of violence also deterred many would-be attendees who didn’t arrive early enough and were dissuaded from getting in line by the large leftwing mob outside. Nonetheless, some 60-80 students and members of the community were able to gain early entrance.

On the outside, during Taylor’s speech, over a dozen members of the patriot community also made a show of force and were not intimidated by the Leftist mob, thereby helping to ensure the Left-wing mob was peaceful aside from its bullhorn bullying.

As the evening wore on, more members of the Left arrived and increased their bullying but the combination of steadfastness from the University, police presence, and Jared Taylor supporters on the outside was enough to keep the speech a safe place.

Taylor gave a speech promoting his views as a White Advocate, noting that it was whites who built a country that non-whites now wish to live in despite its being called racist [’People like you’: White nationalist Jared Taylor to Muslim-American journalist , by Amna Nawaz, ABCE News,  March 21, 2017].

In turn, Taylor attacked the “Race Is a Social Construct” theme prevalent in academia and used to justify America as institutionally racist. He noted those academic themes are rooted in Marxist and anti-white dialectics, not on real and biological markers. By contrast, he listed verified and factual markers such as physiology, body chemistry, DNA, disease prevalence, gestation periods, maturation rates, sports competition, and IQ results, showing that they correlate with race and reveal differing comparative advantages and disadvantages. A noteworthy example: pathologists can determine with 90% accuracy an individual’s racial ancestry simply by examining the bacteria in their mouth!

Taylor pointed out that refusing to recognize racial reality and the associated comparative advantages and disadvantages, while simultaneously claiming institutional racism exists, means unfairly blaming whites for the failures of blacks and Hispanics. He gave other examples of how diversity is a terrible weakness, not a strength, and argued that the attempt to build a multiracial America has failed.

Furthermore, Taylor demolished the arguments of the anti-white Left that race is a creation of White Supremacy dating just from the 17th century. He noted the Egyptian “Book of the Gates” contained representation of race, and that other archeological finds show ancient societies recognized different races.

A final hilarious anecdote: Taylor’s own experience as a young man in Western Africa, where Whites were nearly non-existent. Black families would bring their children to see him and giggle when they cried out in fright and fear at something they had never seen before—a white man. Taylor quipped that our pseudo-academics have no explanation for this apparent racism by black babies.

Taylor’s final point: how US and Western European government policies have catastrophically erred by not accepting race realism and instead embracing the fallacy that race is a “social construct.” The result: immigration policies that swamp White populations, discrimination policies against whites in the private and public workplace, the degradation of public and higher education, and the modern superstition known as Wokeism. America and Western Europe have become multiracial and multiethnic countries filled with class, social, and economic inequality, more like Brazil than their historic patterns. The leadership class has done “ourselves and our posterity” an enormous disservice, ensuring racial animosity against whites and a bleak future.

Some people in the audience challenged Taylor. Most tried gotcha questions such as asking what Paul Gottfried thought about Jared Taylor’s points on Jews, to which Jared said ask Dr. Gottfried. A lone Establishment College Republican in the crowd simply denounced ASU CRU for allowing Jared Taylor a podium and had nothing to add. A few asked questions about white Identity, and when the Irish became white. Jared Taylor easily threw these aside, noting the Irish were always white, and that their troubles in early America were related to America’s British identity—the Irish and British just didn’t get along. Taylor noted that nations are a subset of race, not separate from race.

Overall, most of the questions related to how the present system was discriminatory against Whites and what is the solution. Paraphrasing Jared Taylor, “Simply, the leadership class must recognize race exists and allow ALL races and ethnicities to associate together freely.”

Campus security proved firm. On Jared Taylor’s exit, a dozen police officers easily escorted him and his party to their cars without incident. According to sources, after the event, Taylor and a number of students and young professionals joined together for some camaraderie and good cheer, thereby making new connections and deepening their growing coalition.

In summary, the ASU CRU sponsored event with Jared Taylor was an outstanding success that saw him in his first campus appearance in ten years, during which he brought needed information to a new and young audience.

Most important, we can say that the candle of Free Speech still remains lit in Arizona.

CRU has posted a phone camera video of the talk here.

Reginald De Chantillon [Email him] is a former GOP campaign strategist who worked on Pete Wilson’s campaigns for Governor, Proposition 187, and other local elections in California. He refused to sell his soul and left professional party building.