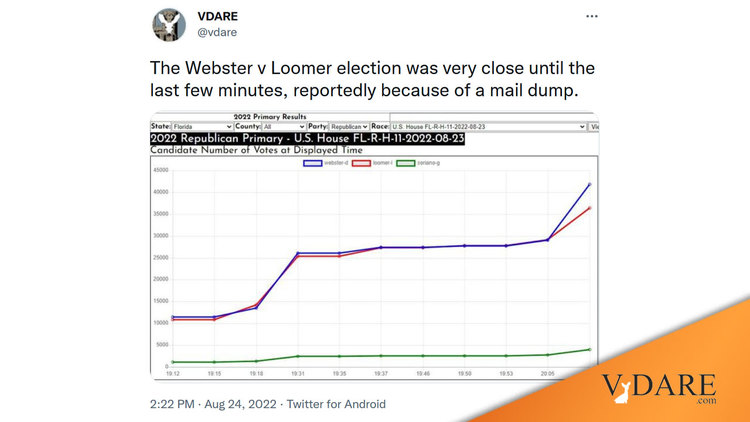 VDARE.com Editor Peter Brimelow writes: Driving into FL-11 yesterday, we were amazed by the vast number of Loomer For Congress signs—we only saw one Webster sign, I think outside his headquarters—as later by the size and enthusiasm of the crowd at her Election Watch party. This made her narrow defeat, after leading much of the night until one of those mysterious last-minute vote dumps, reportedly of mail-in ballots, particularly frustrating. VDARE.com does not endorse candidates, but I personally maxed out to Laura, as previously to Neil Kumar and Lauren Witzke, because they ran on the elemental issue of an immigration moratorium. And in this cycle Laura and Neil succeeded in getting their orthodox GOP opponents to reveal the fact that they’d never given a moment’s thought to an immigration moratorium (see here and here). So I consider these investments in getting the moratorium concept into public debate, and the immigration issue generally, to be a success. My only regret: no one took my advice and said, on primary night, that they would run again next time, thus capitalizing on the name-recognition. Of course, the personal cost of these campaigns is appalling. But immigration patriot Lou Barletta had to run three times before finally defeating an entrenched incumbent Democrat in Hazleton, PA.

“We are losing our country to big-tech election interference,” Laura Loomer said after a narrow defeat last night in the Republican primary for Florida’s 11th District. “I am pleading with the Republican Party to please start taking this issue seriously, because the American people deserve representation.”

I don’t think the Republican Party is listening, nor will the American people get representation under the current regime. Still, Laura Loomer’s extraordinary campaign deserves close attention. Her primary challenge to incumbent Daniel Webster was far closer than many expected. She lost by 51.1 percent to 44.2 percent. Another candidate, Gavriel Soriano, who touted “America First,” took a little over 4 percent, and we can probably assume most of his support would have gone to Miss Loomer.

The “far-right” candidate was in the lead for much of the vote count, but the last batch broke against her.

The Webster v Loomer election was very close until the last few minutes, reportedly because of a mail dump. pic.twitter.com/TPTVziDpqr

This always seems to benefit the more left-wing candidate, something we also saw during the 2020 presidential election. It may be because of the timing for counting absentee and other kinds of votes.

Miss Loomer went into the vote expecting victory. “We’re going to win,” she told me on Monday. “We have over 10,700 individual donors; those are grassroots donors.” She contrasted the “tremendous grassroots support” she enjoyed with what she called the “uniparty” establishment. When I asked the amount of the average campaign donation, she quickly replied: $56.

As Miss Loomer explained, her campaign had a surprising beginning:

I was recruited to move to Lake Country to primary Daniel Webster. And so I received a very warm welcome because I was actually recruited and invited by local Republican Party officials here to primary Dan Webster because they don’t want a RINO [Republican In Name Only] representing their seat. This is a majority-red Republican seat. . . . Obviously when you are recruited and you have people inviting you to primary their do-nothing RINO congressman you’re going to have more of a [positive] reception than if you come in and if you primary someone who is well-liked.

Last night proved she was right, but she didn’t have quite have the momentum to overcome the tremendous advantages of incumbency. Daniel Webster served 28 years in the Florida legislature, won election to Congress in 2010, served in the 10th District from 2011 to 2017, and has served in his current district from 2017 until now. In contrast, Miss Loomer is arguably the most deplatformed person in the United States; certainly in the top 10.

Miss Loomer has a long activist history, for which she has been severely punished. It’s not controversial to say that she’s . . . controversial. She disrupted a production of Julius Caesar that put President Trump in the assassinated leader’s role and handcuffed herself to Twitter’s New York City building to protest losing her account. After Nancy Pelosi criticized Donald Trump’s border wall, she jumped the fence around her mansion along with three “undocumented” men she found at Home Depot. They set up a tent, and the men knocked on Speaker Pelosi’s door, asking for sanctuary.

Activism, as well as statements critical of Muslims and others, led to bans from Facebook, Venmo, Twitter, Instagram, Uber, Lyft, Uber Eats, PayPal, GoFundMe, Medium, Tee Spring, and even Chase Bank. This was a particularly vicious, anti-democratic canceling; Miss Loomer was the Republican candidate in a different congressional district in Florida, President Trump’s own district, and had the President’s endorsement—but no mainstream social media. America has a China-style “Social Credit System,” just one with more arbitrary and depraved rules.

The Republican Party still does not seem worried about the precedent this sets for their candidates and for all Americans. Short of the government arresting her, it’s hard to think of a way our rulers could muzzle her more completely. If it served our rulers’ interests, the regime would call someone like her in China or Russia a “pro-democracy” activist whose victimization justified economic sanctions.

Progressives might argue that she was artificially supported by Democrats who want a “fringe” candidate to win in the Republican primary and then lose in the general election. Democrats funded Republican candidates who questioned the 2020 election’s results, including Doug Mastriano in Pennsylvania and John Gibbs in Michigan, both of whom won primaries. This didn’t happen with Miss Loomer.

I’ll note here that there was no Democratic campaign arm propping up loomer or meddling, etc…This is sheer base voter preference in action. https://t.co/7PFuLoiq7Z

Miss Loomer has not conceded defeat, and some journalists are angry. Of course, they were sympathetic when black Democrat Stacey Abrams claimed “the game was rigged against the voters of Georgia” to explain her defeat in the 2018 Georgia governor’s election. Miss Loomer can argue that the game was rigged far more against her. Without even considering questions about voting machines or absentee ballots, a system in which one candidate is muzzled is not legitimate.

This isn’t new. Time memorably bragged about the effort to “fortify” the 2020 election against President Trump. Sam Harris recently said there “absolutely” was a “conspiracy” to make sure President Trump didn’t win in 2020, and he said it was a good thing. As for censorship of the New York Post’s stories about Hunter Biden’s apparent corruption in the closing days of the 2020 campaign, Mr. Harris said that “Hunter Biden could have literally had the corpses of children in his basement, I would not have cared.”

President Trump did not endorse Laura Loomer this time, though he didn’t oppose her either. His silence was especially surprising because Rep. Webster skipped the vote on the second impeachment trial as well as the vote to set up the commission investigating the Capitol riot. Miss Loomer says that Rep. Webster tries to “distance himself from Donald Trump every chance he gets,” but Mr. Trump apparently wasn’t bothered by this.

We’ll never know if President Trump’s endorsement would have relegated Daniel Webster to the political oblivion of Liz Cheney. It would have made him look more powerful than ever, and certainly would have cowed any Republicans eager to abandon him.

Miss Loomer said her main issues were “election integrity, big tech social-media censorship, election interference, [and] immigration.” She favors a full immigration moratorium, and calls the crowds at the Southern border an “invasion.” She explained that legal immigration is a bigger problem in some ways than illegal immigration. H1-B visas and other cheap labor policies used by tech companies can even give foreigners the power to determine what Americans can discuss online. We don’t know who monitors our speech online and what cultural whims they follow.

Miss Loomer calls herself “a free-speech absolutist.” Media censorship means big-tech companies can take sides in elections. She said that’s “why billionaires in Silicon Valley have more authority to decide who our representatives are than any elected body or any representative political entity in our country, or the world.” She notes that the Republican National Committee did nothing when a sitting president was banned. She wants to know what it did with the money it raised complaining about censorship.

Though she is Jewish, Miss Loomer said Christians are under attack. She said she disagrees with the 73 percent of Jews who voted Democratic (a figure evidently taken from this poll). Though she said it’s been a “lonely, hard life” with many Republicans and conservative activists refusing to help her, she thanked Michelle Malkin, Nick Fuentes, Peter Brimelow, Gavin McInnes, Roger Stone, and Alex Jones for support. She specifically criticized Steve Bannon for not helping her, and was especially warm towards Nick Fuentes and the “America First” network.

Miss Loomer said she opposes racial preferences and called the Great Replacement not a theory but a fact. “It’s an electoral strategy so they can replace the majority of our country,” she said, “and people agree with me.” She argued that all elected officials should be required to be native-born citizens, like presidential candidates.

Miss Loomer says the people of her district understand that things have changed from the days when Ronald Reagan signed an amnesty for illegal immigrants. “Why does anyone think it’s a good idea to take care of foreigners when we can’t take care of our own?” she asked. She complained that the American government, including Republican politicians, are obsessed with what’s happening overseas when Americans at home are having a hard time paying for food and gas.

Miss Loomer says she wanted to “drive the GOP to greatness, kicking and screaming,” but the Republicans enter the 2022 midterms with no clear alternative to the Biden agenda. A “red wave” looks increasingly fanciful. What do Republicans actually do? If Miss Loomer’s race is any indication, it’s ignore their own voters. How do they explain Daniel Webster’s narrow victory? He would have beat a normal opponent with no trouble. Against a candidate that the entire media and corporate power structure opposes personally, it shouldn’t even have been a race, but he almost lost. Republicans seem indifferent not just to the survival of America, but even to their own party.

Say what you will about Laura Loomer, she fights against extraordinary odds. If Republican politicians had an ounce of her courage, or if conservative voters demanded an ounce more out of their representatives, America would be a very different country.

“Free speech absolutism” should unite not just white advocates but all Americans. America is not a “proposition nation,” but even if it were, free speech should be the proposition. If we don’t have that, this is not a free country and its institutions are not legitimate.

Laura Loomer will be speaking at the upcoming American Renaissance conference. She told me that if elected, she would “obviously” represent all her constituents, but she also said:

We can no longer deny that there is a war on white America, there is a war on white Christian conservatives in particular, and things like CRT [Critical Race Theory] and affirmative action are just code words for “hate whitey.“ They have declared open season on whites in America. I look forward being an outspoken critic of anti-white racism. I am really honored to be speaking at American Renaissance in November.

Miss Loomer fought a tough campaign against extraordinary odds. I look forward to her speech in November.