In the wake of a horrific mass shooting like Dylann Roof’s murder of nine African Americans in Charleston SC, gun control advocates of course claim that gun control would have prevented the tragedy. Conservatism Inc. spokesmen respond “guns don’t kill people, people kill people.” Yet with racial feeling apparently motivating Roof’s crime, the Left of course blames “racism”—particularly focusing on the Confederate Battle Flag. And, in contrast to its support for gun rights, Conservatism Inc. is quick to abandon the flag. This is yet another reason why it loses every battle in the Culture War.

In fact, beyond Roof’s car having a novelty Confederate license plate, there is nothing to suggest that the Battle Flag had much to do with his views. Even if the flag meant “hate” rather than “heritage” to him, nothing suggests that the flag made him hate blacks, much less kill them. His alleged manifesto does not mention Southern nationalism at all, but it is very explicit about black crime and Main Stream Media manipulation of the Trayvon Martin case, both occurring long after Appomattox.

But the Left seems perfectly happy to endorse this narrative.

The Boston Globe ran a cartoon featuring a reporter who intones "Officials are still trying to fathom the roots of the shooter's hatred" with the Confederate Flag in the background. The appalling Ta-Nehisi Coates writes: “Roof’s crime cannot be divorced from the ideology of white supremacy which long animated his state nor from its potent symbol—the Confederate flag.” [Take Down the Confederate Flag—Now, The Atlantic, June 18, 2015]South Carolina 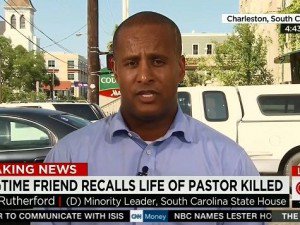 House Democratic Minority Leader J. Todd Rutherford (right) said "rhetoric nationwide has led people to believe, like this young man, that it’s okay to walk into a church and take nine lives." When asked to explain, Rutherford blamed South Carolina's lack of hate crimes laws and the fact that "South Carolina is the only state that I’m aware of that still flies a Confederate flag in front of the statehouse dome." [Friend of Charleston Victim: Fox News ‘Hate Speech’ a Potential Influence, by Josh Feldman, MediaIte, June 18, 2015] South Carolina state NAACP president Lonnie Randolph said the shooting occurred because “This is a state that feels that it is OK to fly the Confederate flag in front of our State House.” [Despite mourning, statehouse Confederate battle flag remains at full staff, By Schuyler Kropf, Post And Courier, June 18, 2015]

The pathetic response from Conservatism Inc. to this hyperbole is sad but unsurprising. By and large, they are not so quick to insist that the flag and anyone who waves it is inherently racist. However, they are still willing to remove it.

Take down the #ConfederateFlag at the SC Capitol. To many, it is a symbol of racial hatred. Remove it now to honor #Charleston victims.

Rick Perry said that “ I agree that we need to be looking at these issues as ways to bring the country together. And if these are issues that are pushing us apart, then maybe there’s a good conversation that needs to be had about [it].” Jeb Bush weighed in on his Facebook page

“My position on how to address the Confederate flag is clear,” Mr. Bush wrote. “In Florida, we acted, moving the flag from the state grounds to a museum where it belonged.” He added: “Following a period of mourning, there will rightly be a discussion among leaders in the state about how South Carolina should move forward and I’m confident they will do the right thing.”

In a statement provided to The Associated Press, he said the last thing the people of South Carolina need is “people from outside of the state coming in and dictating how they should resolve it.” Mr. Cruz said he understands both sides of the debate – including those who see the flag as a symbol of “racial oppression and a history of slavery” and “those who want to remember the sacrifices of their ancestors and the traditions of their states — not the racial oppression, but the historical traditions.” Mitt Romney, Jeb Bush and Ted Cruz Weigh In on Confederate Flag at South Carolina Capitol, By Michael Barbary, NYT, June 20, 2015

At National Review, Ian Tuttle, while criticizing Coates’ attack on the Battle Flag, still thought “compromise should be possible” because

…if reducing the visibility of these symbols would offer relief to those genuinely hurt, and would remove an object of contention keeping persons of different races from cooperating to advance true racial justice, that is something supporters of Confederate symbols should be able to do. The ‘Blood-Stained Banner’ in Charleston, June 18, 2015]

Tuttle received (mild) praise for this from Mother Jones.

These statements have a common assumption: the fact that some people get offended by the flag means that the conservatives must “compromise” in the name of healing. They ignore that the Battle Flag’s current placement is already the product of previous compromise—and that the NAACP and its allies will never be happy. In fact, they’ll be coming for the U.S. flag next. In an op-ed against the Battle Flag, CNN legal commentator Danny Cevallos acknowledged

Of course, our collective outrage has been inconsistent over the years. From 1979 to 1985, one long-running hit television show featured heroes who drove a 1969 Dodge Charger...with a Confederate flag on the roof, and a horn that played Dixie. Not only was "The Dukes of Hazzard" a hit, kids everywhere in the early 80s wanted a toy car just like the General Lee — flag and all.

and that “no one seemed to mind the not-too-subtle nods to the Confederacy.”

Cevallos could have added that until recently no one minded the Battle Flag being atop the state house in Alabama and South Carolina and being part of the state flags of Georgia and Mississippi as well. It is only in the last 25 years that blacks and the Left have decided to attack it as a symbol of racism. Before then, it was as American as apple pie—its display part of the post-Civil War reconciliation between the sections.

When the Confederate Flag first came down off the State House in South Carolina, the late Sam Francis warned “Given the standards by which the NAACP and similar racial extremists select their targets, there is no reason they should not demand the abolition of the American flag.”

Now, a New York Times article on the renewed demands to remove the Battle Flag showed displayed a tweet (embedded below) which stated “IT'S ONLY ABOUT HISTORY it's never about the savagery of white supremacists. EVER. #TakeItDown #takedownthatflag” and accompanied with three pictures of the Klan flying the Confederate Flag and one of neo-Nazis flying a confederate flag, alongside two Swastika flags, two American flags, and one Californian flag.

IT'S ONLY ABOUT HISTORY it's never about the savagery of white supremacists. EVER. pic.twitter.com/feq8zlH18E #TakeItDown #takedownthatflag

Thus, by the tweeter’s logic, both the American and Californian flag are about “the savagery of white supremacists”.

The 9th Circuit Court of Appeals upheld the principles conduct and earlier this year, the Supreme Court declined to review the case.

Though the cases dealt with different legal issues, the result was the same: minorities can claim to be offended by both Confederate Flag and the American flag, the State restricts display of the flags, and the Courts uphold the suppression.

Conversely, an illegal alien graduate of the University of California-San Diego recently waved the Mexican flag on stage as she received her diploma without any fear of sanction. [Controversy erupts after undocumented immigrant waves Mexican flag at graduation, Fox News Latino, June 19, 2015]

In 2004, Howard Dean lamented the Democrats loss of the white working class vote, and said, "I still want to be the candidate for guys with Confederate flags in their pickup trucks."

Dick Gephardt responded “"I don't want to be the candidate for guys with Confederate flags in their pickup trucks. I will win the Democratic nomination because I will be the candidate for the guys with American flags in their pickup trucks.” [Dean's comment on Confederate flags sparks Iowa dust-up, By William C. Mann, Associated Press, November 2, 2003]

If Conservatism, Inc. is unwilling to stand up for the Confederate Flag, it won’t be long before Gephardt’s comments become as controversial as Dean’s.