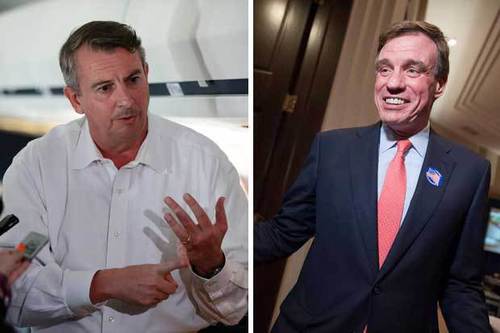 Virginia GOP Senate candidate Ed Gillespie claimed he had “not seen” Ted Cruz’s bill to combat Obama’s Administrative Amnesty and declined to endorse it during his debate with Democratic Senator Mark Warner Saturday night. [Mark Warner on offense in Virginia Senate Debate, by James Hohmann, Politico, July 26, 2014] Typical: Ed Gillespie is a caricature of an Establishment Republican—former lobbyist, George W. Bush advisor, Republican National Committee head. Needless to say, offering voters a corporate cartoon at a time of national crisis isn’t working. Because the GOP has allowed the demographic transformation of Virginia, the only way Republicans can now succeed is by winning over working class white voters and increasing white turnout. But Gillespie can’t do it. He’s the latest example of the GOP Establishment’s dirty little secret: it’s terrible at winning elections.

How bad a candidate is Gillespie? Let us count the ways.

None of the stupefying boredom, tactical incompetence, or banal political correctness that characterizes Gillespie’s campaign is surprising. The entire raison d'être for his campaign is, in the biased words of the New York Times, to show the “intent of more mainstream Virginia Republicans to retake control of the party after a Tea Party-backed candidate lost the governorship.” [Gillespie, Former Republican Chairman, Readies to Run for Senate in Virginia, by Jonathan Martin, New York Times, January 9, 2014]

The unnamed “Tea Party” candidate: Ken Cuccinelli, who had a strong record on immigration that he ran away from during the 2013 gubernatorial election, partially because of political consultants like Ed Gillespie. As a result, Cuccinelli failed to turn out the white base, and suffered an unexpectedly narrow defeat in what even the Main Stream Media called a “base election.”

Indeed, Gillespie seems like he is deliberately avoiding issues that could rally white voters.

Indeed, Gillespie commented during a prior controversy that contemporary Virginia is “more the Dynamic Dominion than the Old Dominion.” He also said, “The state is "growing and diversifying, and I think the governor's new proclamation [which pointlessly apologized for slavery] reflects that." [McDonnell’s laudable lead on Confederate past, Washington Post, October 3, 2010] He also wants diverse GOP candidates. Ed Gillespie seeks 'diverse' Republican candidates in the fight for 2014, By Jennifer Harper, The Washington Times, February 6, 2013

Of course, Gillespie’s “Dynamic Dominion” owes much of its economic growth to the boom in federal spending. A penny-pinching campaign about “cutting spending” has nothing to offer a state whose richest areas are almost entirely dependent on government dollars. [Virginia’s Feast on U.S. Funds Nears an End, by Trip Gabriel, New York Times, March 2, 2013]

You would think a “communications consultant” from the DC colony of Alexandria would understand this—even if it was Robert E. Lee’s boyhood home.

Above all, the wonderful growth in diversity that Gillespie hails is driven by immigration, especially from Asia and Latin America. Surprising no-one other than Republican consultants, 66% of Latino voters and 63% of the “model minority” Asian voters supported Democrat Terry McAuliffe in 2013 over Ken Cuccinelli. [New Race Politics and the Virginia Election, by Gary Segura, Latino Decisions, November 6, 2013]

The result is that Gillespie’s “Dynamic Dominion” confronts Republicans with a hostile coalition of affluent, government-dependent voters in Northern Virginia and an increasing population of non-whites who will never vote Republican barring a major realignment. [McAuliffe’s Winning Combo: Northern Virginia and Changing Demographics, by Garance Franke-Ruta, The Atlantic, November 8, 2013]

With whites at 72% of the Virginia electorate in 2013 even with reduced white turnout, Gillespie could still win if he ran a base-driven campaign and confronted Democratic tricks like the usual black voter fraud. Mark Warner knows this, which is why in past campaigns he aggressively campaigned in rural Virginia, hired actors from the Dukes of Hazzard to campaign for him, and sponsored NASCAR teams to reduce his losses among Republican-leaning white voters. [Virginia’s Man of the Moment, by Bob Guldin, GW Magazine, Spring 2002]

But Gillespie has built his entire life and career making sure Republican politicians never represent the interests of the people who vote for them. So Warner actually is better at relating to ordinary Virginians than he is.

Now, in his first-ever election campaign, Gillespie seems confused that lines about “regulatory relief” and other pointless wonkery that go over well with fellow consultants in Arlington and Alexandria don’t resonate with Virginians who see their state and country being stolen from them.

As a consultant, Gillespie has profited greatly from leeching resources away from the conservative base. Now, he’s learning an iron law of nature—the parasite can’t survive without the host.