Even After Omnibus Rout, Trump Has Many Immigration Enforcement Options

Not to put a too fine a point on the Omnibungle, it’s bad. But as bad as John (We Are Doomed) Derbyshire says? Perhaps not. Before you think I am one of those fawning Trump supporters, like The Last Refuge, which seems to have endorsed the bump stock ban, let me put it this way: President Trump still has immigration enforcement options after his Omnibus rout.  Think of it, not as 4-D chess, but as pulling chestnuts out of the fire. 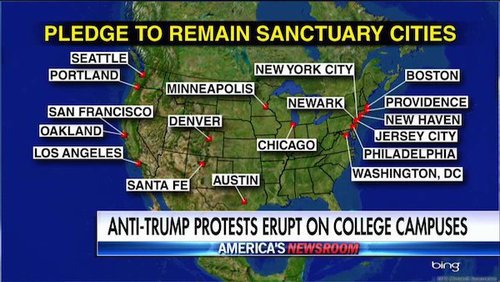 Harken back to 2016, when VDARE.com’s Federale (who—it can now be revealed— was recently purged from Google’s Blogspot/Blogger) reported on Texas GOP Congressman John Culberson’s plan to use the reprogramming power to attack Sanctuary Cities (a.k.a. Treason Towns):

Reprogramming is an obscure aspect of the funding of government agencies and departments which gives department heads the authority to move monies from one budget line item to another.  It is quite commonly used, but has to be authorized by Congress, as the Executive branch is prohibited by the Constitution from spending money not authorized by Congress.

In most cases, a particular agency or department may move money around with the permission of the sub-committee chairman that has oversight jurisdiction over that particular agency or department, in this case Culberson as Chairman of the Commerce, Justice and Science Appropriations Subcommittee. However, Culberson has decided not to give routine reprogramming authority to the DOJ, which will basically bring the whole DOJ to a screeching halt.

Correspondingly, there has been some recent chatter on Twitter about a letter sent by President Trump to cuckservative Paul Ryan about designating certain spending as emergency appropriations.

In accordance with section 7058(d) of division K of the Consolidated Appropriations Act, 2018 (H.R. 1625; the “Act”), I hereby designate as an emergency requirement all funding so designated by the Congress in the Act pursuant to section 251(b)(2)(A) of the Balanced Budget and Emergency Deficit Control Act of 1985, for the accounts referenced in section 7058(d).

[Text of a Letter from the President to the Speaker of the House of Representatives and the President of the Senate, Statements and Releases, Whitehouse.gov, March 23, 2018]

Some are claiming that designation gives the President reprogramming authority. [Trump’s Interesting Text Sent to Congress Immediately After the Omnibus Signing, SpartaReport, March 25, 2018]

This may be grasping at straws, but with the cooperation of the appropriate House committee chairmen, the President should be able to reprogram money from one or more Department of Homeland Security (DHS) program, to another, such as reprogramming more money for hiring agents and officers—or fencing. [ Ann Coulter: Trump Should Use Money for National Defense to Build a Border Wall, SpartaReport, March 25, 2018]

In fact, such bollard fencing is currently under construction, both new and replacement, on the border with Mexico.  Ann Coulter is technically right that no “wall” is being built, but highly effective bollard fencing, e.g. concrete filled steel tubing 30 feet high, is being built as we speak:

Money for the Calexico project came in Trump's first year in office with the Department of Homeland Security Appropriations Act, according to a spokesman for Customs and Border Protection. That legislation gives CBP about $260.9 million for "procurement, construction, and improvements."

The Calexico project contract will cost about $18 million, Castrejon said.

Agents generally use the term "fence" to refer to barriers that were in place prior to the Trump administration. With the announcement of this project, that seems to be changing.

"We are calling this a border wall," Castrejon said. "It is not a new wall. It's a replacement wall."

The new barrier is made of bollards — posts placed close together so that people can't get through but agents can see if anyone is on the other side. The posts are thicker and taller than the 15- to 20-foot bollards erected in the 2000s in other parts of the El Centro Sector.

The new project is replacing old Vietnam War-era landing mats that were put up in the 1990s.

[Border Patrol Is Building Border Barrier In Calexico; Is It A Fence, Or A Trump 'Wall'?, by Kate Morrissey, Los Angeles Times, February 26, 2018] 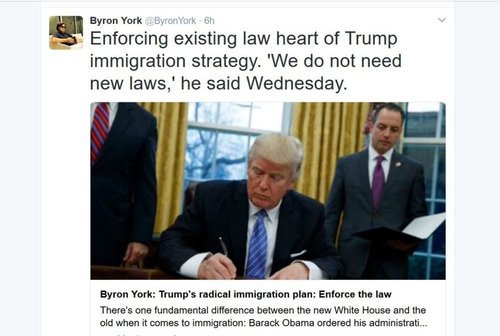 This correspondent does not want to seem too blue sky for realists like John Derbyshire and Coulter. But just as reprogramming and vague budget language can be used to build highly effective fencing by executive fiat, so there are other actions that President Trump can take to counteract the negative influence of the Omnibus.

For example, as VDARE.com has repeatedly noted in the context of a new Operation Wetback, the President has tremendous authority to direct enforcement efforts against illegal aliens, especially in Sanctuary Cities Treason Towns.

The President can direct reprogramming to the DHS hiring issue, such as to increase hiring of Border Patrol Agents (BPA), Customs and Border Protection Officers (CBPO), Air Interdiction Agents (AIA), Special Agents (SA), and Deportation Officers (DO). He can also direct the enforcement components of DHS, the U.S. Border Patrol, Customs and Border Protection Office of Field Operations, Air and Marine Operations, Homeland Security Investigations, and Enforcement and Removal Operations, to redeploy Agents and Officers to interior enforcement—especially to places like, oh, Oakland, CA.

For instance, about 15 years ago, President George Bush ordered the closing of all interior Border Patrol Stations, most of which were in rural areas of the interior of the United States where they were called “stations” BPAs enforced immigration law, mainly directed at work-site enforcement on farms and ranches, but they also performed city patrol and general area control in small and large towns.

But there is no legal restriction preventing BPAs from being deployed not only back to the interior for rural enforcement, but nothing stopping President Trump from deploying BPAs to large cities, like, for instance, Oakland, CA.

President Trump could order that the Border Patrol Station in Pleasanton, CA, near the San Francisco Bay Area, be reopened. There is a large underutilized Army Base there, and a hundred or so agents could be deployed there on either a permanent or Temporary Duty Location (TDY) basis to serve as an objective lesson to the Sanctuary Cities there.

BPAs could also be assigned to the large immigration office located at Appraisers Building, 630 Sansome Street in San Francisco, where they agents could begin worksite and City Patrol duties, either in uniform or mufti, in the beautiful but recalcitrant City and County of San Francisco.

President Trump can also order the current denizens of the building, ICE and ICE ERO, to begin more vigorous enforcement.  This is still somewhat lacking now despite the fierce noises from Thomas Homan on the issue of punishing California for its sedition and treason.

President Trump has options.  It is for him to choose.  Just as Barack Obama set an example, that of an Administrative Amnesty, so President Trump can do just the opposite, a new Operation Wetback.

Nothing in the Omnibus spending bill can stop Trump’s use of vigorous Executive action.

It is all up to him.