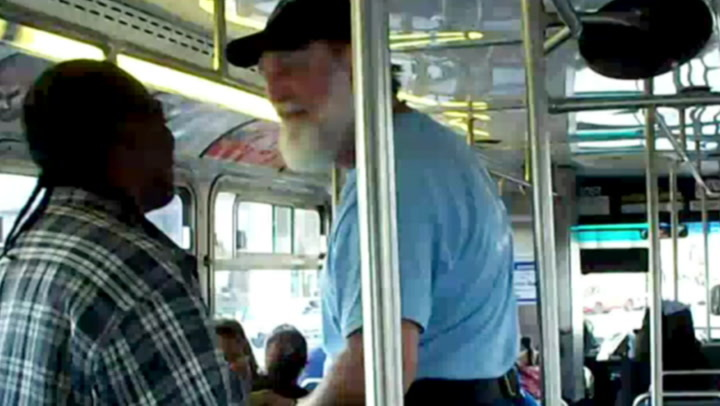 Americans fed up with black on white crime have found an unlikely hero in Thomas Bruso, who has been dubbed "Epic Beard Man". In a widely circulated YouTube video posted on February 16, Bruso defends himself against a black thug. [Bad language warning—YouTube may require you to sign in because of adult language or violence.]

Bruso is a 67 year-old  Vietnam veteran, who apparently has some history of mental illness. While riding the bus in Oakland, he was talking to someone about getting his shoes shined for his mother's funeral and a black man named Michael—whose last name is unknown—managed to get offended because the words "shoe shine", "boy", and "brother" were used in the same sentence. He confronted Bruso, who initially misinterpreted the man as offering to shine his shoes. Michael yelled "Why a brotha gotta spit-shine yo' shoes?" and "Why a white man can't shine his shoes?"

Epic Beard Man responded by saying he wasn't into prejudice, [VDARE.com note: Proving that Mr. Bruso has totally missed the Political Correctness memo he expressed his unwillingness to discriminate on grounds forbidden by the Civil Rights Act of 1964 by saying "It could be a Chinaman—it don't matter. I ain't prejudiced." ] to which Michael said "You take your a— back up there and get the f— out mah face right now."

Not wanting trouble, Bruso went to the front of the bus, but said "You ain't scaring this white boy. I'm 67 years old", as he walked away.

When Michael continues to harass Bruso, he tells him to "Sit your little black ass down."

Needless to say, Michael does not leave him alone. Iyanna Washington, a black female college student (!) who taped the incident, egged Michael on calling Epic Beard Man "pinky"—a racial slur for Whites—and yelling, "Beat his white a—! F— this bitch!"

Michael went to the front of the bus and sucker punched Bruso who was sitting down. But Epic Beard Man rose up and scored several clean shots to Michel's face. He was knocked to the ground and covered with blood.

To tee it off, you can see a bench ad with the "keep our city clean and safe" and "I am a Motherf——" printed on the back of Bruso's shirt, as he walks off the bus.

Michael, who just got a bloody nose, is seen both whining to "call an amba-lamps [Ebonics for ambulance]" while at the same time saying "I will come back, I will kill dat n——[sic]"

Washington then videotapes herself going through Bruso's bag, which he had left on the bus, yelling "Go through dat sh—!"

She tells Michael, "We can press charges, I got it on videotape", apparently oblivious to the fact that Michael is clearly seen starting the fight and she videotaped herself stealing.

Later that day she posted the fight on YouTube, still oblivious to how bad it made her look. [Epic Beard Man, Encyclopedia Dramatica]

The video instantly became a hit. At one point, "Epic Beard Man" was the 16th most frequently searched term on Google. To date, over 3 million people have seen the original video entitled "AC TRANSIT BUS FIGHT I AM A MOTHERF*CKER." At least another million people have seen it posted under other names like "OLD WHITE MAN BEATS THE SHIT OUT OF A WANNABE THUG ON THE BUS!" and "Epic beard old white guy beats the s*it out of *sshole black guy."

The original video has over 50,000 comments. Virtually all of the comments praise Epic Beard Man, and many are even too politically incorrect for VDARE.COM. Some of the more sober ones include:

Meanwhile, thousands of video responses and parodies are made such as making the fight look like the videogame Mortal Kombat, or animated versions imagining that Epic Beard Man was having a Vietnam Flashback.

Many videos make light of Michael's Ebonic pronunciation of "ambulance" as either "amber lamps," "m and ms" and "ambalamps." There are even websites and videos devoted to an attractive girl who is sitting next to Michael on the bus, and is listening to music who manages to completely ignore the chaos a few feet away from her. She is dubbed "Amber Lamps."

Many websites are even selling shirts with slogans like "Mess with Epic Beard Man...Go Home In An Amber-Lamps."

What should we make out of this internet phenomenon? It is easy to dismiss it as just some silly incident between two crazy people caught on tape that brings out a few racial slurs from immature anonymous internet posters.

While the crazy banter and Bruso's colorful personality makes this video very amusing, and allows people to get away with more politically incorrect thoughts, it is the audacity of some blacks that really inspires most of the comments. It is not just that Michael picks a fight with an old man that makes people upset. It is that he starts it because he imagines a perfectly innocuous comment is racist. It is that after he starts the fight, both he and videotaper Iyanna Washington still think they are in the right. It is that the Washington thinks she can yell anti-white slurs and steal on tape without any repercussions.

They may have seen the video of a white student brutally beaten by blacks on a bus in Belleville, IL who does not even try to defend himself.

Americans are glad to see someone finally fight back.

Bruso clearly has a few screws loose. He had earlier been videotaped getting tasered by police at an Oakland A's game for being belligerent. But given how self-defense against blacks is often criminalized, as in the Rodney King and Bernie Goetz cases, you need to be a little insane to stand up to the abuse.

Many commenters noted that had the situation been reversed and a white attacked an elderly black man with other whites yelling "Beat his black ass," he would have been charged with a hate crime, which is obviously true. It is also true that had this not been caught on video tape, Epic Beard Man could very easily be charged with a hate crime himself—especially after staying "You ain't scaring this White Boy" and "Sit your little black ass down", even though he clearly was acting in self defense.

During the Rodney King trial, Lew Rockwell joked "Liberals talk about banning guns. As a libertarian, I can't agree. I am, however, beginning to wonder about video cameras."

But in 1992, no one could see videos that weren't on the evening or cable news. The Main Stream Media selectively showed the police subduing King without the context of King violently attacking them.

No doubt if this fight were caught on tape ten years ago, the MSM would splice a video together with Epic Beard Man yelling "sit your little black ass down" and then hitting Michael, without any of the context.

Thanks to the internet, I'm willing to drop the campaign against video cameras.