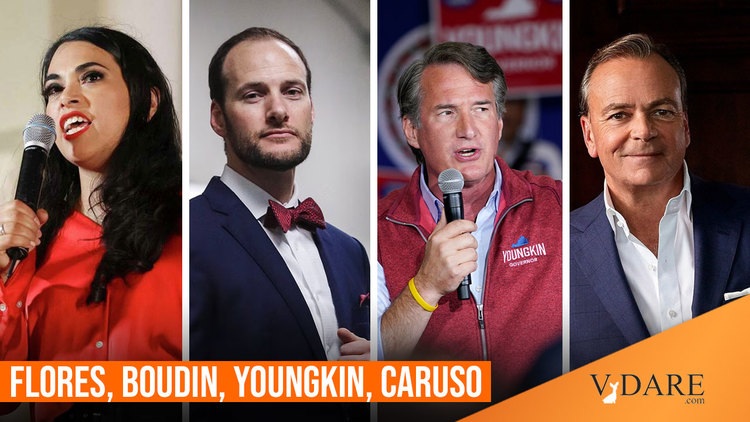 Earlier: Asians In San Francisco Are Angry That Their "Leaders" Won't Protect Them From Assault

History was made last week when a Republican won a majority-Hispanic congressional district in South Texas. It went by over 20 points for Hillary Clinton in 2016 and four points for Joe Biden in 2020. But on Tuesday night, Republican Mayra Flores won by nearly nine points [Republican Mayra Flores flips Dem House seat in South Texas, by Marissa Martinez, Politico, June 14, 2022]. Victory in an 85 percent Hispanic district provoked many arguments as to why it happened. But there’s one simple reason why: non-black minorities are fed up with the lawlessness and Open Borders promoted by the Democrats. And Flores’s win is just another example that many non-whites want Law And Order, not Black Lives Matter.

Flores didn’t bother with the usual Karl Rove–type tripe aimed at Hispanics. She instead ran on a solid conservative agenda that emphasized support for border security and law enforcement (she’s married to a Border Patrol officer, a fact she loved to highlight on the campaign trail). Her signs proclaimed: “God. Family. Country.” [The Republican Who Flipped South Texas, Wall Street Journal, June 15, 2022].  Most important, she did not promise Amnesty. She vowed to crack down on illegal immigration in her platform statement on the subject:

Illegal immigration encourages and funds human/child trafficking. I legally immigrated to America when I was six years old. Living in South Texas offers a unique perspective on illegal immigration and how it affects the livelihood of American citizens. We MUST secure our border to keep bad individuals out and to encourage LEGAL immigration.

It’s not ideal, especially the part about “LEGAL immigration.” But it’s vastly superior to the pro-Amnesty message that Republicans consultants bombarded Hispanics within the pre-Trump era.

And unlike that message, her conservative platform secured her a seat in Congress.

This is just one of many rumblings that Democrats have alienated the foreigners they banked on as reliable voters. And the cause is the party’s complete disregard for America’s laws in order to reward criminal non-whites. Black Lives Matter took precedence above anything else. And the non-black parts of the Democratic coalition aren’t happy—exactly as Steve Sailer, writing on VDARE.com,  predicted back in 2009.

The recall of San Francisco’s Leftist district attorney Chesa Boudin is a prime example. The Soros-backed attorney, the son of Weatherman terrorists, did his utmost to turn The City by the Bay into a dystopia. He campaigned and won on a promised of leniency for criminals. “We will not prosecute cases involving quality-of-life crimes,” he said in 2019. “Crimes such as public camping, offering or soliciting sex, public urination, blocking a sidewalk, etc., should not and will not be prosecuted” [Boudin Will Not Prosecute Prostitution, Public Camping, And Other ‘Quality-Of-Life Crimes,’ by Matt Charnock, SFist, November 16, 2019].

As soon as Boudin was sworn in January of 2020, he went to work dismantling the criminal justice system. He ended cash bail, eliminated gang enhancements in prosecutions, halted prosecutions of criminals found with drugs or weapons in routine traffic stops, and barred his prosecutors from seeking longer sentences for repeat offenders. He did this all in the name of combating “systemic racism” [How San Francisco Became a Failed City, by Nellie Bowles, The Atlantic, June 8, 2022]

“Our quest to achieve racial equality requires facing the painful truth that our criminal legal system has been and still currently is racist,” he tweeted in February of 2020. “It is racist in our laws, our policing, our prosecution and our sentencing. We have a lot of work to do in San Francisco.”

Our quest to achieve racial equality requires facing the painful truth that our criminal legal system has been and still currently is racist.

The city’s residents have apparently decided they‘ve had enough. Roughly 60% of voters chose to recall Boudin earlier this month.

The group that proved pivotal in that result were Asians, who comprise 36% of San Francisco’s residents. Several precincts that are predominantly Asian voted in favor of the recall by over 80%. (interestingly, the other key areas were dominated by affluent whites) [Boudin Ousted by Coalition of Asian Voters From All Income Levels and Wealthy Whites, by Anna Tong, San Francisco Standard, June 8, 2022].

A similar result occurred in February when San Francisco voters recalled three Leftist school board members [San Francisco residents recall three members of embattled school board, The Guardian, February 16, 2022]. Another sop the Left offers to blacks is the elimination of standards in education and traces of white heritage in school names. San Francisco’s school board set out to do both. The board ended merit-based admissions to elite schools and vowed to rename all schools named after “racist” whites. These racist whites included Abraham Lincoln and George Washington [San Francisco May Rename Schools Named After Washington, Lincoln And Others, by Merrit Kennedy, NPR, January 28, 2021].

One of the recalled officials, a black woman named Alison Collins, told Asians upset over the school’s policies that they had assimilated “white supremacist thinking” and were “house n****r{s]” [San Francisco school board member Alison Collins used slur to describe Asian Americans in tweets, by Eric Ting, SFGate, March 19, 2021].

This Tweet from 2016—the asterisks are hers—refers to Asians who weren’t as vocally anti-Trump as she wanted them to be. 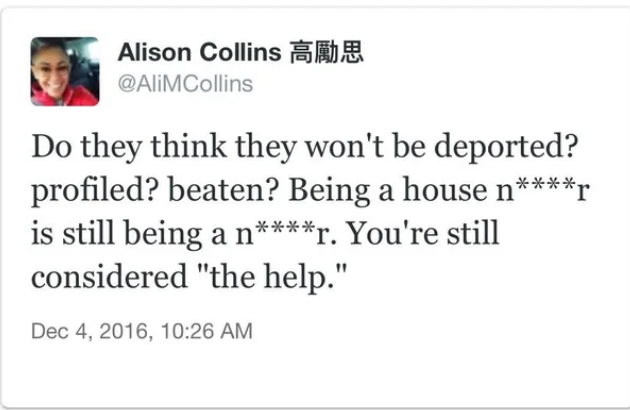 The reference to Asians being “beaten” refers to imaginary white violence, not the real-life black-on-Asian violence that actually occurred and is still going on.

Whatever the NYT may have thought, crimes like Asian Vicha Ratanapakdee's murder by black Antoine Watson, with the tacit acquiescence of Chesa Boudin, are the reason Boudin is the FORMER DA. https://t.co/Xh8krOyo4w

Asians showed their opinion of her and the two other Leftist board members by being the main voting bloc that ousted the school officials [San Francisco School Board Recall: An Analysis of the Vote, by Michael Hartney, City Journal, March 10, 2022].

The Virginia gubernatorial race also showed a similar influx of minority voters into the GOP in response to the Democrats’ black obsession. Under Democratic leadership, the state of Virginia pushed reduced standards and Critical Race Theory in schools, as well as tolerating BLM lawlessness during the 2020 riots. Glenn Youngkin’s Democrat opponent, Terry McAuliffe, promised he would go easy on criminals if he became governor [Youngkin attacks on criminal justice reform put McAuliffe on the defensive, by Jenny Gathright, NPR, November 1, 2021].

Democratic stupidity and the promises of greater idiocy helped the GOP win. While white turnout was the decisive factor, a significant number of non-whites also voted for Youngkin’s message of restoring basic standards in school and law and order [Exit poll results from the 2021 election for Virginia governor, Washington Post, November 2, 2022]. Asians don’t like it when education standards are messed with.

Los Angeles could replicate a similar backlash against Black Identity Politics in its mayoral race. White billionaire Rick Caruso looks like he may defeat black congresswoman Karen Bass in the runoff. Caruso finished a close second in the first round. His entire message centers around cracking down on violent crime and homelessness [How a billionaire mall magnate pulled ahead in the Los Angeles mayoral race, by Lara Korte and Alexander Nieves, Politico, June 6, 2022].

Bass, on the other hand, is one of the leaders of criminal justice reform in Congress. In 2021 she introduced the George Floyd Justice in Policing Act that would neuter law enforcement [Rep. Bass 'hopeful' on passing police reform legislation, by Connor O’Brien, Politico, April 18, 2021]. She’s now trying to ditch her past support for defunding police in the mayoral race as Caruso catches up to her.

A white centrist defeating a black progressive in a 25 percent white city on a Law And Order message would send a loud message to the entire country.

What probably helps Caruso is that L.A. is only eight percent black. San Francisco was able to reject the Democrats’ black obsession with its small black population.

Blacks don’t seem to mind that black criminals are allowed to do as they please. Other minorities do seem to care, however.

There are plenty of other Leftist DAs who could face Chesa Boudin’s fate, but it’s more likely if they oversee a city where blacks don’t dominate city politics [Other woke DAs who could be run out of office like San Francisco’s Chesa Boudin, by Bruce Golding, New York Post, June 8, 2022]. Blacks are not going to support a backlash against their own interests.

Republicans should learn from this revolt against the Democrats’ BLM focus. Law And Order, tough immigration enforcement, support for basic standards in schools, and hostility to the BLM agenda are political winners. There’s no need to pander to minorities with Amnesty, criminal justice reform, and cringe paeans to how immigrants built America.

Many of them, just like the majority of whites, simply want politicians to stand up to black criminality and promise safe, stable communities.