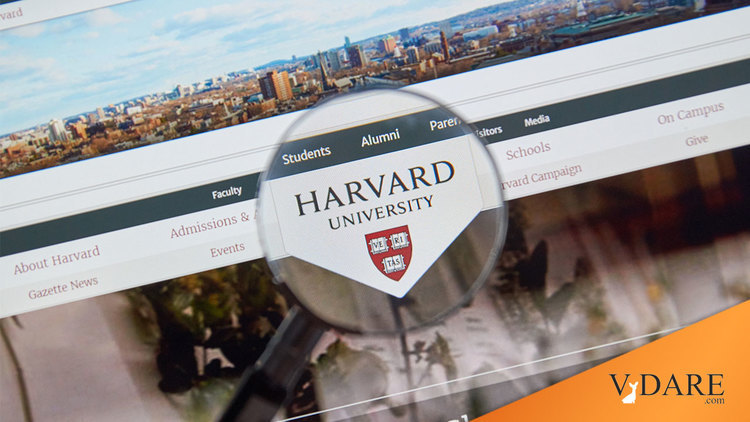 Summers was no doubt expected to lay on the sonorous soft soap expected from such an august personage about how we must all redouble our efforts to overcome the persistent plague of discrimination. Instead, Summers, a brilliant but socially maladroit economist, offered a sophisticated data-driven analysis of why women are fairly rare on the science, engineering, and mathematics faculties of Ivy League colleges:

In response, MIT biologist Nancy Hopkins—who (conflict of interest be damned!) had headed the MIT committee that had investigated her own complaint of discrimination, leading, not surprisingly, to her getting a big pay raise—declared that she had to flee Summers' talk or "I would've either blacked out or thrown up."

And Denice Denton, the chancellor-designate of UC Santa Cruz, stood up to "speak truth to power" to Larry, in her own self-admiring phrase. (In 2006, Denton climbed to the roof of the luxury high rise in which lived her lesbian lover—for whom she had arranged a $192,000 per year job at California taxpayer expense—and leapt to her death.)

"Faust runs one of the most powerful incubators of feminist complaint and nonsensical academic theory in the country." [February 9, 2007]

Eventually, Dr. Faust brought back a $50 million wish list of payoffs to feminist interests, which the beleaguered Summers immediately agreed to fund. Hey, the money wasn't coming out of Larry's pocket, so why not?

Despite Larry's craven surrender to Dr. Faust's demands, it didn't save him. Last year, Summers resigned under pressure from the faculty.

(Not all of their complaints against Summers were mercenary or trivial. Mechanical engineering professor Frederick H. Abernathy led an honorable uprising over Summers spending tens of millions of Harvard's money to defend, unsuccessfully, his best friend, economist Andrei Shleifer, from charges of financial corruption dating to when Shleifer advised the Yeltsin regime for Harvard.)

So whom did Harvard pick last week as its new President?

A prophetic clue appeared back in January 2005 in the Harvard Crimson:

"Radcliffe Institute Dean Drew Gilpin Faust said Friday that the fallout from University President Lawrence H. Summers' remarks on females in science had generated 'a moment of enormous possibility' for the advancement of women at Harvard."

Yes—Larry's little miscue has indeed proven "a moment of enormous possibility" for women at Harvard, such as, oh, to pick a totally random example, Dr. Faust herself…who has just been named the new President of Harvard University!

Apparently shaking down the last president for $50 million can help you build your political base for becoming the next president.

Anyway, $50 million is pocket lint compared to what Dr. Faust now oversees. The joke is often repeated that faculty politics are so vicious because the stakes are so low. But Harvard's endowment is $29 billion.

Academic feminism: it's quite the lucrative racket.

You might wonder: how Harvard can risk its reputation by dumping a social scientist for telling the truth and appointing a self-serving feminist apparatchik in his place?

Don't be silly. Colleges are among the least competitive institutions in this country. Their reputations are almost foolproof.

If you want to understand status and power in modern America, you need to grasp how the college prestige game works.

As a high school junior in 1975, I read a 1500-page guide to colleges from front-to-back. I recently had occasion to look through a new college directory and was struck by what I saw.

Back in 1975, the world was quite different. The Soviet Union dominated Eurasia while Maoist China festered in poverty. The most famous airlines were Pan-Am and TWA, and big computer companies included Sperry-Rand, Burroughs, Control Data, DEC, and Wang.

Yet, despite all this change, the exclusive private colleges in 2007 turn out to be almost exactly the same as in 1975.

U.S. News & World Report constantly fiddles with its ranking criteria so that it can garner publicity by frequently announcing a new #1 university in America. But nothing much really changes over time. Even more locked in amber is its list of the top liberal arts colleges in 2007. It looks a lot like a list of the top liberal arts colleges that F. Scott Fitzgerald might have drawn up.

Only a handful of schools have risen sharply. For example, Pepperdine's sensational location overlooking Malibu Beach had finally helped it rise above mediocrity. Back in my day, Washington U. of St. Louis was using its big endowment to buy students with high SAT scores, and that has finally paid off in a stronger reputation. Notre Dame has leveraged its football glamour to move up academically. The decline in crime has benefited urban schools like NYU.

An Atlantic Monthly study of admissions selectivity found that

"one good predictor of a school's selectivity rank is nothing more complicated than the date of its founding. The average founding years of the top five, ten, twenty-five, fifty, and 100 most selective schools in the nation are 1767, 1785, 1822, 1839, and 1850, respectively." [The Selectivity Illusion, by Don Peck, November 2003]

And practically no private college has fallen sharply in status since 1975. In other words, incompetent administrators can't do much damage to a college's reputation in less than a couple of generations.

First, colleges simply are not judged upon how well they educate undergraduates. When I was applying, it was well known that grade inflation was out of control at Stanford; UC Berkeley was notorious for enormous lecture hall classes taught by inept grad students with incomprehensible accents. A friend who started at homely Cal State Northridge, then transferred to UC San Diego and on to UC Berkeley in pursuit of a more glamorous degree, told me the quality of instruction fell with each step up the ladder of cachet.

Yet, Stanford's and Berkeley's renown have only increased.

The Harvard alumnus who interviewed me in 1975 mentioned that he had taken courses from Henry Kissinger, Daniel Patrick Moynihan, John Kenneth Galbraith, and David Riesman.

"Oh, no," he replied. "They were mostly terrible teachers."

He explained that Harvard's policy of luring away the most celebrated middle-aged professors at lesser colleges meant that undergraduates were systematically shortchanged. Harvard's superstars devoted their best efforts to overseeing grad students, advising the President, and other duties more pleasant than correcting undergraduates' essays.

of his first year at Harvard Law School  depicts an equally dysfunctional system of teaching.

But, who really cares how much you might (or might not) learn at Harvard? The point of getting into Harvard is to be able to say you got into Harvard. (And to make friends with other ambitious hotshots who also got into Harvard.)

A second reason that colleges don't decline in prestige no matter how badly they mess up: alumni won't let them. If you buy a car and it turns out to be a lemon, you don't feel an urge to speak well of the brand after that. On the other hand, your college stays on your resume. So you have an incentive to do what you can to talk up its supposed excellence.

Harvard, with grads salted prominently throughout the media, thus is in no danger of losing its reputation. And that means it can afford the most egregious mismanagement.

Nonetheless, there may be one thing Harvard can't afford: to be honest about what it is really selling. Summers, with his talk of IQ bell curves, came perilously close to spilling the beans, so he had to go.

What students are actually buying from Harvard is not so much a Harvard education as Harvard's certification that, as high school seniors, they were among the country's best and brightest. (A Harvard degree doesn't add much distinction over just getting in, because 96 percent of Harvard freshmen graduate.)

There are, however, potentially much quicker and cheaper ways to certify such things than to spend four years and $185,000 at Harvard—for example, IQ tests. So Harvard needs to uphold the myth that what makes Harvard graduates special is the ineffably marvelous education they obtained on the hallowed shores of the Charles River.

Harvard trustees don't lose sleep worrying that the left half of the Bell Curve will figure out an effective way to challenge the hegemony of the IQ overclass. What they do worry about is attacks on their use of IQ sorting techniques, such as the politically incorrect but indispensable SAT standardized exam, from pressure groups who perform below average, such as women, blacks, and Hispanics. Each group boasts enough high IQ activists, such as Dr. Faust, to make trouble for Harvard.

So Harvard buys off potential troublemakers like Dr. Faust with its "commitment to diversity"—i.e., quotas. By promoting them at the expense of more competent men, whites, and Asians, Harvard preserves most of its freedom to continue to discriminate ruthlessly on IQ in the rest of its selection process.

What Harvard wants is for everybody just to shut up about group differences in intelligence. Stifling discussion of IQ allows the IQ upper class to quietly push its interests at the expense of everyone else.