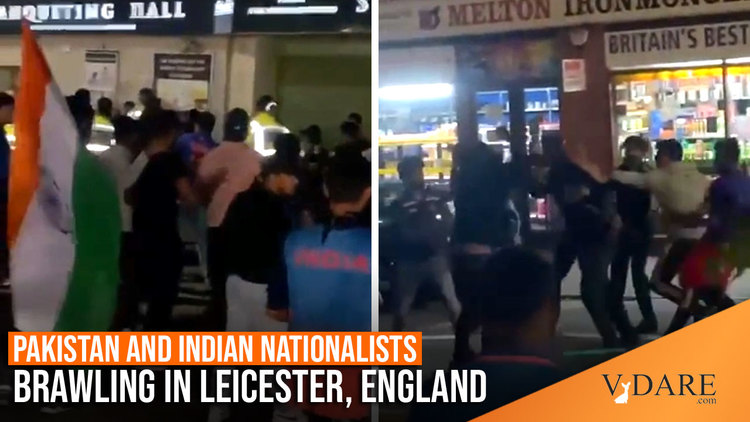 See also: “Like The Roman, I Seem To See ’The River Tiber Foaming With Much Blood’”—Enoch Powell’s Great Speech

Leicester is an ancient city of around 350,000 people in English Midlands—only an hour’s drive from Wolverhampton, the hometown of England’s all-too-prescient immigration patriot Enoch Powell. Founded by the Romans, by the Middle Ages it was one of the country’s major trading posts, becoming heavily industrialized during the nineteenth century. It came to international attention in 2012 when the remains of Shakespeare’s famous hunchback King Richard III were found there [Richard III could be buried under Leicester car park, archaeologists say, by Press Association, The Guardian, August 24, 2012].

However, Leicester has long held the attention of British leftists by becoming the country’s most “diverse” city. In the early 1970s, large numbers of South Asians began arriving in Leicester to work in its factories. Some 25% of the Ugandan Asians expelled by Idi Amin in 1972 settled in Leicester. By 1991, Leicester was 28% non-white. In the 2001 census, it was 36% non-white, and by 2011 it had tipped over into being Britain’s first “majority minority city.” 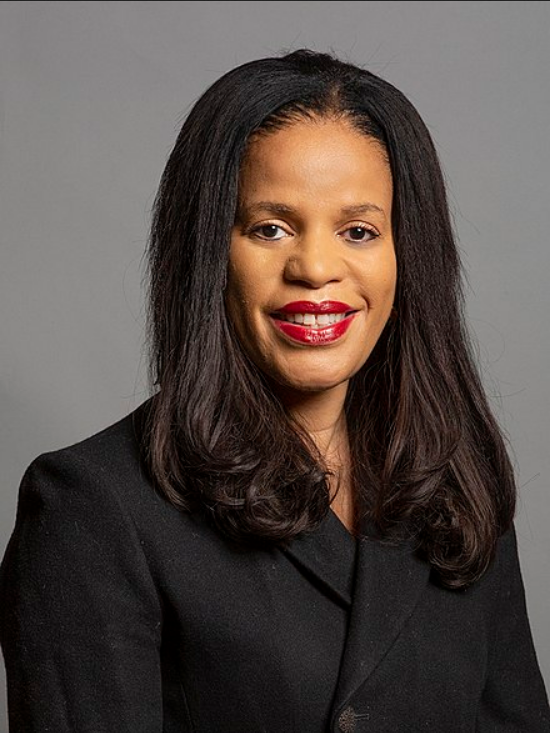 One of Leicester’s Members of Parliament, a black woman of West Indian descent called Claudia Webbe, who was convicted late last year of criminal harassment of her husband’s lover and expelled from the Labour parliamentary group, tweeted on September 17th that:

Leicester is a shining example of how people from different cultures can live together side by side. Our diversity is what makes Leicester special. We are the city where the minorities make up the majority. And we are richer for this vibrant exchange of cultures.

But it appears that Leicester is very far from the beacon of Multicultural harmony that Webbe imagines—which is clearly why she sent out that tweet. In late August, Leicester degenerated into violent rioting, which then continued for almost two weeks, flaring up as recently as September 18th. And this was not a matter of evil “white supremacists” being unhappy about the takeover of what was once an English city. The violence was between Hindus and Muslims.

Naturally, the Pravda-like taxpayer-funded broadcaster BBC (= a much bigger NPR) tried to cover up what was happening. At first, it simply didn’t report the riots, so people learnt about them from alternative media or from local media. Then the BBC carefully reported them without actually giving away any information that would question the “Diversity Is Our Strength” and “Only Whites Can Be Racist” mantras.

Eventually, the BBC admitted that hundreds of people had been rioting in Leicester: “It is the latest in a series of disturbances, including violence following an India and Pakistan cricket match on 28 August” [Hundreds on streets in Leicester disorder, BBC News, September 17, 2022].

In other words, the taxpayer-funded broadcaster had suppressed what was happening on the streets of Leicester for over a week.

Earlier that day, the BBC had reported that there had been disturbances in Leicester and that various young men had been arrested. But it had given no information whatsoever on the cause of these disturbances or the fact that they were anything to do with Muslims and Hindus. It was also relegated to the regional news section [East Leicester disorder leads to 27 arrests, BBC News, September 17, 2022].

The leftist tabloid The Mirror did report the disorder when it happened—but failed to mention it was rioting between Muslims and Hindus [Huge brawl breaks out in UK street as mob throw punches after India vs Pakistan cricket match, by Hannah Dodd & Liam Buckler, The Mirror, September 1, 2022].

So, what has actually been happening in this wonderful example of imported urban diversity?

To its credit, local newspaper the Leicester Mercury was on the case immediately. On August 28th, there was a cricket match between India and Pakistan. It should be emphasized that India (80% Hindu) and Pakistan (overwhelmingly Muslim) hate each other and are engaged in a decades-old border dispute [Why India and Pakistan Hate Each Other, by Shamila Chaudhary, Foreign Policy, February 4, 2014].

India won the match, so Hindus poured onto the streets of the Belgrave area of Leicester to celebrate. Naturally, this rather upset the Pakistanis who lived in the area. The Pakistanis started chanting Islamic phrases, which provoked the Hindus. The Hindus chanted their own offensive phrase, and fighting began, which included police officers, themselves South Asian in many cases, being injured. A video of the disorder soon began to circulate on social media [Violence flares during India v Pakistan cricket street celebrations in Belgrave, Leicester, by Asha Patel, Leicester Mercury, August 30, 2022]. In this video, Muslims had gone into a Hindu area at night and were attacking people’s houses.

The Hindus taunted the Muslims by chanting the Hindi phrase “Jai Shri Ram.” This is offensive because it has been chanted in India during anti-Muslim riots and during attacks on mosques by Hindu nationalists. It literally means “Victory to Lord Ram” and is regarded as “hate speech,” so inflammatory is it for Pakistanis and Indian Muslims [The 3 Most Polarizing Words in India, by Snigdha Poonam, Foreign Policy, February 13, 2020]. They also chanted “Pakistan Murdabad” which translates as “Death to Pakistan” and dates back to the partition of India in 1947 when Hindus and Muslims massacred each other [Why is violence breaking out in Leicester?, by John Connolly, The Spectator, September 18, 2022].

The rioting then continued every night, with young male Muslims and Hindus coming onto the streets, entering each other’s “areas” of Leicester, provoking each other and then fighting. This even started happening during the day. A video, published on September 18th, shows a gang of Hindus turning up in a Muslim area and chanting “Victory to Lord Ram!”

The same video shows large numbers of Hindus marching through a Muslim area of the city, again during the day. That such an illegal march could take place at all is only evidence that the British authorities have lost control of parts of Leicester. They are now exclaves of India or of Pakistan.

The riots soon made it into the Indian media, which interpreted them as anti-Hindu. Reports appeared that,  according to witnesses, a Muslim mob vandalized a Hindu temple in Leicester and someone pulled down a saffron flag hanging outside it “amid hooting and cheering by a group of people” [Scared would be understatement: UK’s Leicester riot witness, India Today, September 19, 2021].

Everything was made worse by online rumours that a mosque had also been attacked, which turned out to be false. Claudia Webbe even tried to blame the “Far Right”—the white Far Right, naturally—for stirring up trouble between the communities (which also turned out to be false according to The Spectator’s Connolly).

By September 6, the police had managed to calm down much of the violence, but it still continued to some extent, even though they were using emergency stop and search powers and patrolling the streets at night [Appeals for calm and an end to violence after days of unrest in Leicester, by Asha Patel, Leicester Mercury, September 8, 2022].

Disorder seriously flared up again—supposedly due to social media disinformation about assaults on Hindus by Muslims—last weekend, September 17-18, with Hindus marching through the streets of a Muslim area, as seen in the video above. Over the same weekend, there was conflict in a Muslim area, with bottles being thrown, including at the police.

Muslim Majid Freeman told The Guardian, “We can’t trust the police, we’re going to defend our community ourselves.” Fifteen people were arrested over the weekend to try to stop further disorder [Police call for calm after ‘serious disorder’ breaks out in Leicester, by Aina Khan and Mark Brown, The Guardian, September 18, 2022].

Apparently half of 27 people arrested were not from Leicestershire, the county (= state) that surrounds Leicester. So Hindus and Muslims were coming from other parts of the country to take part in these riots [Half of those arrested over clashes in Leicester from outside county, by Rajeev Sayal et al., The Guardian, September 19, 2022].

There is no “hot take” as to what is happening in Leicester. It is wearisome in its predictability.

As Harvard sociologist Robert Putnam showed years ago, to his great embarrassment, there is no such thing as a “multicultural society.” As he acknowledged:

Residents of all races tend to “hunker down.” Trust (even of one’s own race) is lower, altruism and community cooperation rarer, friends fewer.

But if there is to be cooperation, it will be within race, within ethnic group and within religious community. The inevitable result: areas of England that are no longer England and a system of ethnic minority warring microcosms even within those areas.

The amazing thing about Britain is that this problem is entirely self-inflicted—basically within the reign (1952-2022) of the late Queen Elizabeth II. Fittingly, police had to be diverted from her funeral to quell the Leicester riots: Quiet day in east Leicester as officers and police horses diverted from Queen's funeral., by Tom Mack, Leicestershire Live, September 20, 2022.

As U.K. journalist Julia Hartley-Brewer has put it:

Hundreds of young Muslim + Hindu men, wearing masks or balaclavas, are in violent running street battles against each other night after night for 3 weeks.

Not in India or Pakistan.

This must be the "cultural enrichment" we've heard so much about. pic.twitter.com/li49tbwJ6e

Hundreds of young Muslim + Hindu men, wearing masks or balaclavas, are in violent running street battles against each other night after night for 3 weeks. Not in India or Pakistan. Here in Leicester. This must be the “cultural enrichment” we’ve heard so much about.

Needless to say, for this she has been called ”racist,” but she hasn’t backed down [Julia Hartley-Brewer under fire over Leicester disorder comments with Monty Don leading the criticism, by  Joe Mellor, London Economic, September 19, 2022].