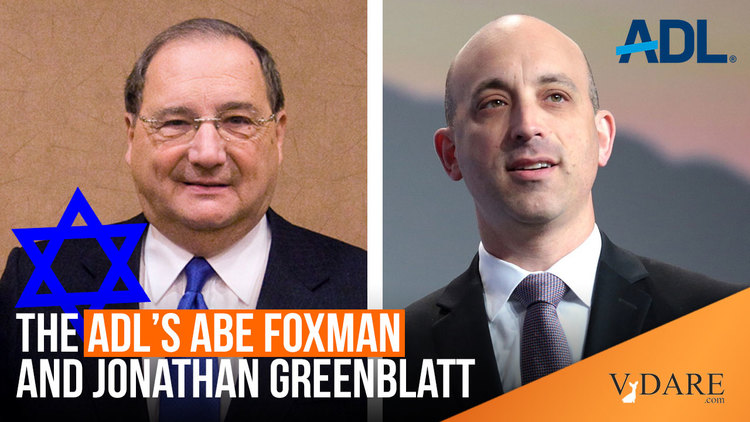 Did The ADL Think It Could Get Away With Hypocrisy On Great Replacement In US vs. Israel? Answer: It Probably Didn’t Think At All

Unexpectedly, Anti-Defamation League chief Jonathan Greenblatt’s attack on Fox’s Tucker Carlson for daring to mention the fact that current immigration policy is Electing A New People blew up in his face. Even Greenblatt’s predecessor Abe Foxman voiced public disagreement, if only because he fears totally alienating the network [ADL hit with blowback over calls for Tucker Carlson to resign, by Dominic Mastrangelo, The Hill, April 14, 2021]. But Carlson’s devastating riposte pointed out that the ADL itself opposes the Great Replacement…in Israel. It just supports it for America. Did the ADL really think it could get away with this blatant hypocrisy? Amazing answer: it probably never thought about it at all.

Partly, this can be explained by political factors. In the current state of American discourse, it is extremely dangerous to criticize, or even Notice, Jewish organizations and their activities (which is why Carlson’s response was so remarkable). Consequently, they are simply unused to scrutiny.

But it may partly be a function of Jewish psychology. I noted last week that a considerable technical literature suggests that blacks are lower in “fairness” that the average white. Something similar appears to be true for Jews.

“Fairness,” as I noted in my article on blacks, is “impartial and just treatment or behavior without favoritism or discrimination.” This is a high-order value which demands that you put aside nepotism, ethnocentrism, and even personal gain, in favor of this abstract goal. So, on this basis, would we expect Jews to be as high in “fairness” as Whites?

No. Firstly, there is abundant evidence that Jews are more ethnocentric than whites; meaning they cooperate strongly with their own people and are hostile to other peoples. Jews have been stereotyped as being highly ethnocentric throughout their history, as Kevin MacDonald showed in his 1994 book A People That Shall Dwell Alone . There is overwhelming evidence that racial stereotypes, like all stereotypes, tend to be true; that’s why they develop [Social Perception and Social Reality, By Lee Jussim, 2012].

This goes very deep. Jewish babies react with far greater horror to strangers of a different ethnic group than do German babies [Security of Infant-Mother, -Father, and -Metapelet Attachments Among Kibbutz-Reared Israeli Children, by Abraham Sagi et al., Monographs of the Society for Research in Child Development, 1985].

Data from the University of Wisconsin’s MIDUS survey of middle-aged Americans demonstrated that among Whites there is a positive correlation between how religious you are and how group-oriented you are. However, the same study found that Jews are the most ethnocentric—group-oriented) religious group—even though they were the least religious group of those surveyed. When factors such as intelligence (which tends to make people less ethnocentric) and religiousness level were controlled for, Jews were still way more ethnocentric than the gentile White groups. (This is discussed in Religiosity as a Predictor of In-Group Favoritism Within and Between Religious Groups, by Curtis Dunkel & Edward Dutton, Personality and Individual Differences, 2016).

If you take into account the number of Jews in a population compared to the number of Whites, then the extent to which Jews “marry out” is far lower. Jews are about 49 times less likely to marry someone of a different faith than Protestants are, for example. (This is discussed in The Anti-Jewish Narrative, by Nathan Cofnas, Philosophia, 2021). The most obvious explanation for this, in the context of the other research: ethnocentrism. Jews seem to be evolved to be higher in ethnocentrism, something that would be heightened by their small gene pool; with people tending to be more ethnocentric when the gene pool is small [Natural History of Ashkenazi Intelligence, By Gregory Cochran et al., Journal of Biosocial Science, 2006]. This higher ethnocentrism would make them less able to suppress ethnocentric instincts in favor of creating fairness than are gentile Whites.

In addition, there is evidence that Jews are perfectly happy for a situation to be unfair. One study compared religious groups in the US—Baptists, Catholics, Methodists, Jews, and Atheists/Agnostics—and asked people what they thought was most important to live a “good life.” Jews, in contrast to all the other groups, highlighted “extra money” [“For Tomorrow We Die”? Testing the Accuracy of Stereotypes about Atheists and Agnostics, by Edward Dutton & Curtis Dunkel, Mankind Quarterly, 2019]. They see it as important to be richer than other people in a way that the whites do not, which implies that they are less concerned about a possibly unfair situation as long as they they benefit. And, being more intelligent than gentile Whites on average (as Richard Lynn has shown in his book The Chosen People) they will better be able to rationalize achieving such an advantage, as intelligent people are typically better at finding ways of rationalizing their biases [Why smart people aren’t better at transcending their biased views, by Tauriq Mousa, The Big Think, June 13, 2012].

Finally, Jews are less mentally stable than Whites. Ashkenazi Jews have significantly elevated levels of bipolar disorder and schizophrenia, both of which can make people paranoid [Genome-Wide Association Study of Schizophrenia in Ashkenazi Jews, by Fernando Goes et al., American Journal of Medical Genetics, 2015]. When people are paranoid, they are less interested in what is “fair”—they are interested simply in surviving and doing so may involve being very “unfair.” People with paranoid personalities tend to be hypocritical and self-seeking [Understanding Paranoia, by Martin Kantor, 2004, p.71].

Because Jews are better at finding ways of rationalizing away their bias and hypocrisy, they may well not believe that they are being “unfair” at all. In this sense, it can be said that intelligent yet paranoid people do not “know themselves”—meaning that they live in a fantasy world in which there is nothing wrong with them; only with others.

This personality type will see the world as packed full of hostile persecutors who want to destroy them, meaning that an obviously Mostly Peaceful protest at the Capitol becomes an “insurrection” in which people could have been killed.

This personality type will also engage in “paranoid projection,” whereby they purport to find an aspect of themselves they dislike in others, causing them to despise these people. “I hate them” becomes “They hate me,” based on finding some minor evidence of this. Hence the Leftist obsession with how “hateful” their opponents are [8 Key Traits of Paranoid Thinkers, by Shahram Heshmat, Psychology Today. February 24, 2016].

The self-centeredness and implicit unfairness of the ADL operatives’ fantasy world means they indeed might very well not have thought at all about what to any outside observer appears to be the utter hypocrisy of their position on the Great Replacement in the U.S. as opposed to Israel.