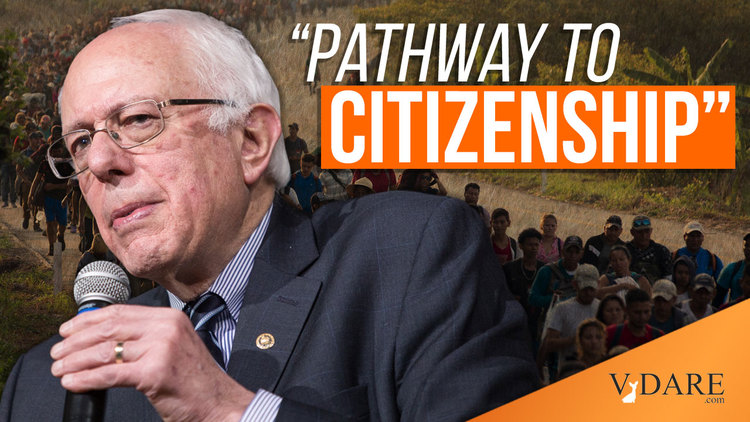 Democrats Plotting To Smuggle Amnesty Through This Congress

Amnesty has been out of the headlines, but don’t think for a minute that the Democrats have forgotten about it—especially given the 930,000 undocumented Democrats caught by the Border Patrol since October 1. After all, Dems and their Treason-Lobby backers openly plan to bring back illegal aliens we’ve already deported [Advocates in US push new efforts to bring back deportees, by Claudia Torrens and Gisela Salomon, Associated Press, May 29, 2021]. But they know they can’t pass an Amnesty in the Senate without eliminating the filibuster, which won’t happen anytime soon. That leaves two options: make concessions on a few cucky, meaningless policies to get the necessary 60 votes for passage—or, as now preferred, smuggle an Amnesty into a partisan budget bill. Patriots watch out!

Thus Vermont’s socialist Sen. Bernie Sanders told reporters recently that Democrats are crafting a partisan infrastructure bill that includes a “Pathway To Citizenship,” Treason Lobby–speak for Amnesty. Democrats hope to use the reconciliation process to push the bill through [Democrats to Seek Citizenship Pathway for Immigrants in Infrastructure Bill, by Jennifer Haberkorn, Los Angeles Times, June 22, 2021]. The Senate can pass a bill by a simple majority if it directly affects the budget. Amnesty and other items on the Leftist wish list, in their twisted view, pertain to the budget.

Just how is Amnesty linked to the budget? Allegedly, it will help pay for it. Using dubious statistics, Democrats claim it will boost the gross domestic product. “Any time there’s been a CBO [Congressional Budget Office] examination of what immigration reform would do, it produces a significant increase in the GDP without really costing much money,” Virginia’s hard-Left Sen. Tim Kaine told Bloomberg [Democrats Weigh Plan to Muscle Through Immigration Changes, by Laura Litvan and Steven T. Dennis, June 16, 2021]. A recent study from the progressive Center for American Progress argued that an Amnesty will add $1.7 trillion to the economy [Citizenship for Undocumented Immigrants Would Boost U.S. Economic Growth, by Giovanni Peri and Reem Zaiour, June 14, 2021]. How that will happen is unclear.

Don’t expect this budget concern to dissuade Democrats from their drive to Elect A New People.

As for who gets Amnesty, including every illegal in the bill is unlikely, for now. Yet one group certain to receive legalization are illegals who arrived here as minors, the so-called “DREAMers.”

Sanders’ Amnesty bill will move forward if the other, much-debated “bipartisan” infrastructure bill fails, which is by no means certain given developments this weekend. Although President Biden, and Democrats and Republicans reached a compromise last week, some observers didn’t think the trillion-dollar bill would pass. Biden had said he wouldn’t sign that bill, which targeted physical infrastructure, unless he could also sign the American Families Plan that would rebuild “human infrastructure," as the Democrats call it  [Biden and Senators Reach Broad Infrastructure Deal, by Jonathan Weisman et al., the New York Times, June 24, 2021]. Republicans cried foul and he quickly reversed himself and said he would, indeed, sign the first deal. Sen. Mitch McConnell supports the separated bill; some Democrats don’t [Sen. Cassidy Says McConnell ‘Will Be For’ Biden’s $1 Trillion Infrastructure Bill—But Big Opposition Remains, by Jonathan Ponciano, Forbes, June 28, 2021].

Those legislative contretemps aside, Democrats might still try to push through an Amnesty for an obvious reason— they believe it will help their Hispanic vote in next year’s midterms—even though such a move would sour the bill among Republicans.

"Democrats stand to gain a lot politically with Latinos in particular if they actually get this done," “immigration activist” Sergio Gonzales [Tweet him] told the Los Angeles Times. "But the inverse is true as well: If it doesn’t actually get done this year, I think it's going to be a major problem for Democrats going into the midterms” [Democrats to Seek Citizenship Pathway for Immigrants in Infrastructure Bill, by Jennifer Haberkorn, June 22, 2021].

That thinking, which immigration-enthusiast Republicans also accept, flies in the face of reality. Hispanic voters simply don’t care about immigration as much as they do about other Democratic priorities, meaning free stuff.

And an Amnesty push might hurt Democrats among all other voters. A new Harvard/Harris poll found that 80 percent of Americans see illegal immigration as a serious issue, 68 percent say Biden encourages it, and 64 percent want the border closed [80% see border disaster, want Trump closure restored, by Paul Bedard, Washington Examiner, June 26, 2021]. Another poll by Future Majority, a Democrat polling company, found that “Open Borders” is one of the biggest turnoffs for independent voters [A GOP blueprint emerges, by Mike Allen and Lachlan Markay, Axios, June 27, 2021]. Yet Democrats are fixated on Amnesty—i.e., electing a new people.

Democrats tell reporters they prefer the partisan way of getting to Amnesty because it doesn’t require them to make concessions to Republicans. They don’t have to pretend to care about the border or illegal immigration. Their goal: legalizing future Democratic voters.

Granted, an Amnesty will likely include a few worthless border-security measures to persuade moderate Democrats and others to vote for the sellout. But Leftist Democrats think they will have to sacrifice less with a partisan approach.

Which means that the major problem for the bill is moderate Democrats. No Republican will vote for a partisan Amnesty. One Democrat could derail it. The senators most likely to vote against it are West Virginia’s Joe Manchin, Arizona’s Krysten Sinema and Mark Kelly, Montana’s Jon Tester, and New Hampshire’s Maggie Hassan.

Manchin and Sinema have been the primary roadblocks to the Leftist Democratic agenda. Both have cast votes against progressive policy items, and both have proudly said they will never vote to repeal the filibuster [Manchin and Sinema Now Face the Weight of History, by Ronald Brownstein, The Atlantic, June 24, 2021]. Along with Tester, they are not up for re-election until 2024, and all three represent states where they can’t run as full-blown liberals. They must show voters they’re moderate and willing to buck unpopular Democratic legislation. Tester and Manchin did vote for Amnesty in 2013, but the increased public pressure could dissuade them from casting the same vote again.

Sinema has shown a surprisingly independent streak on immigration. She recently co-sponsored a bill that would speed up the immigration backlog, yet would make it harder for alleged asylum seekers to gain residency. Compared to the rest of her party, she looks like Jeff Sessions [Sinema-Cornyn border proposal would hurt refugees, by Eleanor Acer et al., Roll Call, June 3, 2021].

Kelly and Hassan might vote against simply because they face competitive re-election battles in 2022. It will be hard to sell voters that they’re moderate when they vote for a partisan Amnesty.

Republicans have done a good job of standing up against Biden’s comprehensive Amnesty bill, but they could still capitulate. The House passed two smaller Amnesties in the spring. One would legalize “Dreamers,” the other would legalize illegal farm workers. The bills have gone nowhere in the Senate, but there’s always a chance that Amnesty could be snuck in. Republicans insist that any immigration legislation must come with serious border security and immigration enforcement measures, which Democrats absolutely oppose [Senate Republicans preview clash over ‘Dreamers’ legislation, by Suzanne Monyak, Roll Call, June 15, 2021].

Immigration should be a Republican strength going into 2022 … if only Republicans will remember that. The Leftist agenda doesn’t play out well in Arizona, Montana, and West Virginia. The GOP must send a message to the senators who represent those moderate states: a vote for Amnesty will cost them re-election. And Democrats in general must pay a price for siding with the Left and the ethnic lobbies over their own voters.

Along with Critical Race Theory, immigration is the issue for Republicans to run and win on in 2022. But to show they’re serious, they must fight the Amnesty.