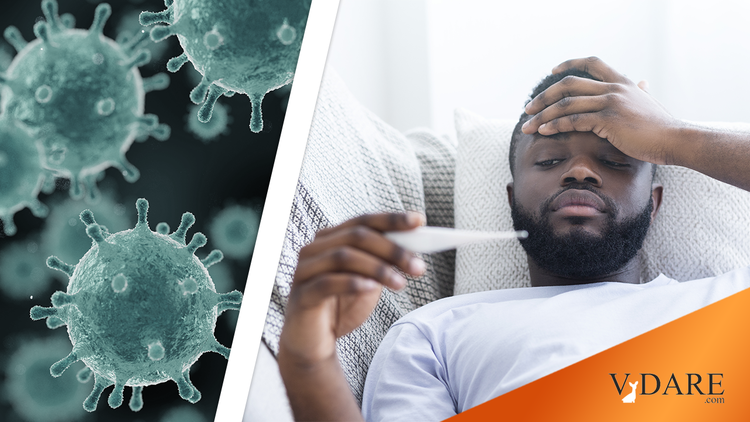 Covid-19 and Race: I Am Completely Vindicated By U.S. Govt. Report

It seemed obvious to me from the beginning that there could be race differences in the prevalence of Covid-19. But literally no media source was discussing the possibility, and even the basic facts on the racial incidence of the disease were just not being reported. I began to end my VDARE.com articles with a mantra: If Covid-19 is not an Equal Opportunity disease, that means our race-denying Ruling Class is frightening most people too much—and not warning some people enough. This will not merely cause unnecessary chaos—it will cost lives. I have now been completely vindicated by a report from the U.S. Centers for Disease Control and Prevention.

Indeed, so extreme has been the Ruling Class flip-flop on this issue that Federal health advisers are now reportedly even considering prioritizing minorities for treatment, arguably unconstitutionally, because race differences in incidence are so pronounced. [Access to COVID-19 vaccine may be restricted based on race, if panel has its way, by Hans Bader, Liberty Unyielding,  July 24, 2020]

As they start to rank which Americans will receive the first effective doses of coronavirus vaccines, U.S. health officials are debating whether to put Black and Latino people, who have disproportionately fallen victim to Covid-19, ahead of other Americanshttps://t.co/roNlbt6T1G

Initially, because it was unclear exactly what was happening—more accurately, because the facts were being suppressed—I simply reported based on what evidence was available.

At first the Wu Flu seemed primarily to impact East Asians, who had shown particularly poor resistance to flu in the past. On this basis, it seemed not unlikely that the outbreak might essentially be confined to East Asia, as earlier outbreaks had been, notably the 2002-2003 SARS pandemic.

This caused me to speculate that the key issue behind Covid-19 incidence in East Asia might be Vitamin C deficiency. If this model was right—if Vitamin C was the key issue—then we would expect blacks to be strongly resistant to Covid-19, as they are good at producing Vitamin C, and this seemingly was the case in Africa itself, where Covid-19 did not and still does not appear to have had a significant impact.

It eventually emerged, however, that the opposite was true among African-Americans, who were strongly over-represented among Covid-19 deaths. (This was the point at which the U.S. Main Stream Media apparently got permission from Political Correctness Central to switch unblushingly to reporting race data, as also happened in Britain.) So even if Vitamin C was relevant—and it still might be—and there must have been something else that was overwhelming this.

Once it became clear that Corona was killing other groups as well, it was also noticeable that it was especially severe among the same groups—such as Italians—who had fared really poorly in America during the 1918 flu epidemic.

Finally, it emerged that non-whites in the West were the worst hit, even when controlling for socioeconomic status. This appears to be due to Vitamin D deficiency indirectly caused by dark skin in an environment with low light—which also helped to explain why Africans in Africa were resistant.

In essence, non-whites in countries with low light are Vitamin D deficient because they cannot so easily absorb sunlight via their skin and synthesize it into Vitamin D.

But others likely also played a part. For example, the fact that Iran and southern Europe were particularly hard hit raised the possibility that, for these people, lack of genetic resistance to flu was significant.

Rounding up all that we now know on race differences in Covid-19 prevalence in the US, Andy Slavitt, former Acting Administrator of the Centers for Medicare and Medicaid Services, has now concluded that the impact was clearly greater on non-whites.

Based on the report by Centers for Disease Control and Prevention [Characteristics of Persons Who Died with COVID-19 — United States, February 12–May 18, 2020 July 17, 2020], Slavitt tells us (in an extended Twitter thread)  that 13% of whites who died were under the age of 65, compared to 30% of non-whites. The median age of death from Covid-19 for those under 65 was 44 for whites but only 31 for non-whites.

Below, a screenshot showing two replies from people worried about what whites will do with this information. 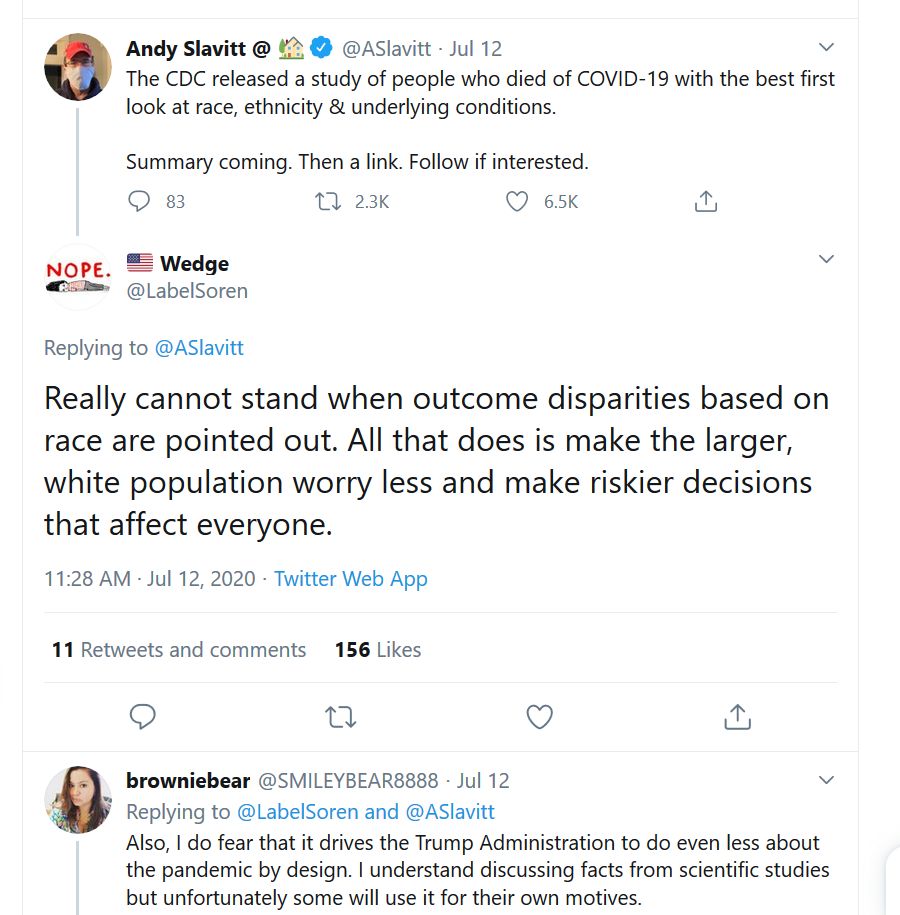 It seems not to occur to them that non-whites might use this information to save their lives.

Slavitt confesses to having been shocked at the extent of deaths among otherwise healthy people, with 25% of those who died—including 17% of those under 65—having no underlying medical conditions.

Of course, non-whites in the US are more likely to have underlying medical conditions. But race differences persist, even when controlling for factors associated with these underlying conditions, such as socioeconomic status. The report cited by Slavitt does not even look at the evidence for this, which has come primarily from assessments of deaths among non-white workers for Britain’s National Health Service and other British data—all of which I reported as soon as it came to my attention.

As I reported the racial developments week by week, my liberal friends argued that the evidence for racial differences was weak and that speculating about it risked “stigmatizing” certain races.

Of course, this “stigmatizing” argument never made any sense. If East Asians, for example, were more likely to die of Covid-19 for genetic reasons, they would be unlikely to impact local whites, if whites were relatively resistant, and whites would have no reason to shun them.

Another argument against my reporting Covid-19’s racial dimension: We didn’t know enough yet and therefore should “wait and see” before reporting anything.

I couldn’t agree less. For one thing, Western governments and media lie all the time about race, and there was no reason to suppose the truth would ever emerge. Thus the fact that SARS was most prevalent among East Asians was never widely reported.

Secondly, the way that we make sense of any phenomenon is by sharing information, discussing what we know, and presenting and testing hypotheses. These will stimulate further thoughts, and fresh insights, until we get closer to being able to really work out what is happening.

To suggest we should just not think about or discuss an issue until “we know more” is effectively saying that we should ignore it—try to put out of minds. After all, at what arbitrary point will we actually have “enough information”? Who decides when, exactly, we “know more”?

The scientific method (now, not coincidentally, under attack in the increasingly multicultural West) doesn’t work like that. Scientists attempt to make sense of the world with the best available data. And when new data come along, as it did in the case of Covid-19, they revise their models accordingly.

That is exactly what I did. On the minus side, this meant that at various points I reported (albeit cautiously) hypotheses that have not held up completely. On the plus side, it meant that I followed the spirit of free scientific enquiry and therefore discovered the most parsimonious explanation for race differences—Vitamin D deficiency—long before the MSM.

The implication of this Vitamin D finding: non-whites in Western countries needed to be particularly careful.

But no-one told them. Except me, in VDARE.com.

The big question: what will we be right about, and the Ruling Class attempt to suppress, next?