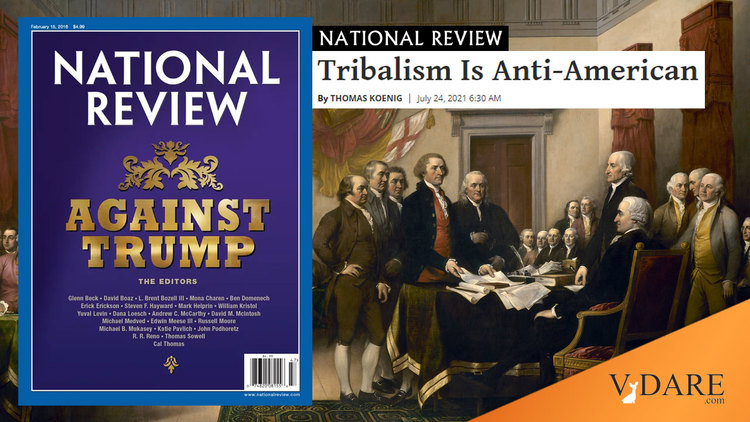 An authentic National Conservative Right has been breaking through one barrier after another over the last few years. First it was the Alt Right, then it was the Dissident Right, then it was America First, and tomorrow the leading brand will be something else. However, though all these iterations are different in some respect, the core of the argument remains the same: America must take its own side. We are a nation, not a landmass or simply an ideological project. And at every stage, Conservatism Inc. has joined with the Left to repress what’s emerging. Needless to say, National Cuckview is wielding the shiv.

Conservatism Inc. keeps trying to negotiate a separate peace with the Left. It’s become something of a cargo cult, worshipping symbols like the flag, the Constitution, or America’s civic identity although substance of those things has been gutted. Of course, Conservatism Inc. wailing has no impact. Cultural Marxists have every reason to keep pushing their iconoclastic attack. After all, their ideology, and really their livelihood, depends upon finding new things to be offended by. Good-faith negotiation is not possible with them. If Con Inc. really believed in color-blindness as it claims, it should move to abolish Affirmative Action, which is the root of Racial Socialism’s power. But it doesn’t, because it’s not serious.

Progressives, even, dare I say it, the Critical Race Theorists, have a more accurate understanding of who created America, what it was created for, and what its future was intended to be than Conservatism Inc. publicists would ever dare admit. The Founders clearly thought the United States would be a majority white state in perpetuity[What The Founders Really Thought About Race, by Jared Taylor, National Policy Institute, February  17 , 2012]. John Jay wrote in Federalist #2:

With equal pleasure I have as often taken notice that Providence has been pleased to give this one connected country to one united people--a people descended from the same ancestors, speaking the same language, professing the same religion, attached to the same principles of government, very similar in their manners and customs, and who, by their joint counsels, arms, and efforts, fighting side by side throughout a long and bloody war, have nobly established general liberty and independence.

This country and this people seem to have been made for each other, and it appears as if it was the design of Providence, that an inheritance so proper and convenient for a band of brethren, united to each other by the strongest ties, should never be split into a number of unsocial, jealous, and alien sovereignties.

Of course, political disputes and partisanship are to some extent inevitable. However, the type of these divisions matters greatly. If “one united people” is discussing something like transportation or health care, people can disagree about questions of efficiency, cost, or the proper role of government. Yet these are essentially technical disputes. In theory, there is a correct answer that will maximize the common good. The point of our institutions is to try to come as close to finding it as possible.

However, when the country becomes battleground for various warring tribes, political debate is simply a zero-sum game regardless of the common good. There is no discussion to be had with those who see their gain as your loss. It’s especially true when they seem to be willing to suffer simply so you can be made to pay a greater cost. You can’t have a polity without a shared idea of community and you can’t have a democracy without a demos. 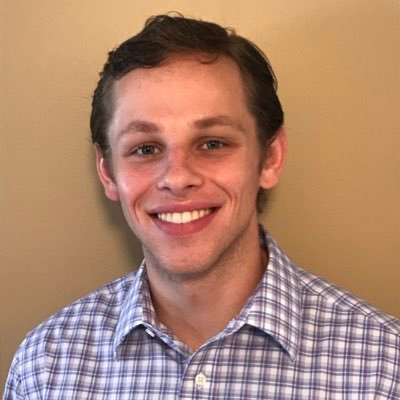 Which is why I find it hard to take yet more concern trolling from National Review. This time, it’s Harvard Law student Thomas Koenig [Tweet him] telling us that “Tribalism Is Anti-American [July 24, 2021]. Once again, we get the argument that America is an abstraction, cooked up by some smart men, and nothing more:

The seeds of the American experiment—the drive toward self-government and individual liberty—may reside in every human heart, but the experiment can persist for longer than a passing moment only through the work of human heads.

The Founding was not the result of pure reason alone, of course. Slavery—an ancient institution—also affected and warped America’s national character from the outset. Slavery is the tyrannical rule of the powerful and privileged. That’s why Abraham Lincoln, an intellectual heir of the Founders, argued that there was no rational basis on which to defend slavery. It’s also why the first antislavery organization in the history of the world was founded in Philadelphia in 1775: Brute force grounded in something as arbitrary as skin color was so clearly opposed to the Revolutionary principles, grounded in reflection and reason, of equal human dignity and rights to liberty.

Let’s leave aside whether something like “rights” really exist. As we’re learning today, you can have all the “rights” you want on paper and they can even be “self-evident,” but without power in the here and now to exercise them, they are just hot air. If the American experiment was designed to protect “rights to liberty,” it failed. We are not free (though we are a libertarian paradise compared to the United Kingdom—see Once Great Britain Under Occupation, by Gregory Hood, American Renaissance December 1, 2017). What we have left, we must defend tooth and nail, with our lives and fortunes.

However, there’s a deeper problem here. Those same Founders who supposedly created the Republic clearly believed that “arbitrary” skin color was important. Thomas Jefferson, whose thinking was far deeper than single misunderstood phrase about all men being created equal, also thought that while the end of slavery was inevitable, it was similarly inevitable that whites and blacks couldn’t live peaceably under the same government [The Declaration of Independence Is For Whites, by Gregory Hood, American Renaissance, July 10, 2018].

The first immigration act limited citizenship to “free white persons… of good character.” America was created by settling unpopulated land, sometimes after purchase, conquering warlike tribes and simply demographically displacing others. You can wax about vague egalitarian ideas defining America, but those who wrote about them back then clearly didn’t believe in them the way people today do. This makes it impossible to appeal to the Founders as a moral authority and claim they would be behind the egalitarian project.

Of course, you can say that the Founders were simply wrong, and we have a more enlightened viewpoint now. Yet if that’s the case, why should we pay attention to the legal institutions they created—the Constitution, and, more broadly, the national identity? Leftists are on firmer ground than “color blind” Conservatism Incers when they argue that America was flawed from its inception and that we shouldn’t be held captive to dead institutions.

The only coherent nationalist response: those things that Leftists claim to be flaws were actually features. We need to return to a better understanding about the way society should be structured that incorporates hierarchy, race realism, and nation.

The phony distinction between “nationalism” and “patriotism” that this Koenig and many others have tried to advance is not impressive:

Binding ourselves so tightly to our in-group and growing so hate-filled toward the “other side” necessarily runs counter to our Founding principles—to what made us exceptional. Why? Because to some significant degree, tribalism is necessarily anti-reason, anti-intellectual. Our in-group is so just and the out-group so despicable that only knee-jerk condemnation of “them” and support for “us” will suffice. That sort of thinking walls us off from independently reasoning our way through political issues, and it is part and parcel of the intolerance, warring, and group loyalties and antagonisms that dominated the pages of human history prior to the Revolution.

The problem here is that “nationalism” was, if anything, a progressive cause at the time of the Revolution. Indeed, it was before its time. The 1848 nationalist revolutions in Europe were targeted against those monarchs and landed aristocrats who regarded the social order to be built upon prescriptive authority, not common blood and culture. Insofar as “all men are created equal” meant anything substantive, it was to deny that the landed aristocracy should have privileges over what Jefferson called the “natural aristocracy.” Jefferson certainly didn’t ignore human differences or suggest that there was no such thing as different peoples or nations. The great geniuses of the past age, like Otto von Bismarck, had the wit to combine nationalism and authority into a synthesis greater than both of its parts.

The question of “us and them,” of who is sovereign and who is not, is inherent and unavoidable. Again, we can’t “reason” with those whose political ideology is “give us your stuff because your property, political institutions, and rights are illegitimate are undeserved.” Why should a Black Lives Matter activist want to compromise with a milquetoast conservative about constitutional niceties?

National Review should take its message to BLM, or, for that matter, the Big Tech oligarchs they can’t stop simping for [Jeff Bezos and Richard Branson Owe You Nothing , by Charles C. W. Cooke, July 20, 2021]. If NR can’t convince them, then out of sheer self-defense we are under no obligation to listen to its demoralization campaign.

However, beyond all of this, there’s one essential question: Why is “American” somehow not a tribal label? What makes it less arbitrary then white, Christian, or conservative?

What does “American” even mean now? After all, apparently anyone can be “American”— you don’t need to speak English, respect the flag, or regard the country’s history with anything other than hatred and contempt. Indeed, the current government that we are supposed to feel “patriotic” about will reward you with preferences in jobs and education if you hate the Historic American Nation. Those with media and economic power will give you better treatment if you despise the flag and American identity.

Perhaps we need to rethink what America truly is and to whom we owe loyalty. Why would anyone align with an identity that is defined by the lack of any real identity? And why is a Frenchman, German, or Englishmen who faces the same opponents that I do somehow a “foreigner,” while the guy who holds an American passport but hates everything about me, my history, and my culture is a “fellow countrymen.”

It’s no wonder that people in the West are, as Tom Wolfe prophesized, going Back to Blood [Back to Blood, by Tom Wolfe, by Gregory Hood, December 21, 2021]. National Review’s suggestion that we rely on the (misquoted) authority of men who in fact would accurately be characterized as “white nationalists” today is hardly a compelling counter.

It’s impossible to take this in good faith anymore. National Review is controlled opposition, doing what Conservatism Inc. always does —shiving the base by telling it that “conservative principles” prohibit them from pursuing their interests.

If that’s the case, it’s time to find some better principles.