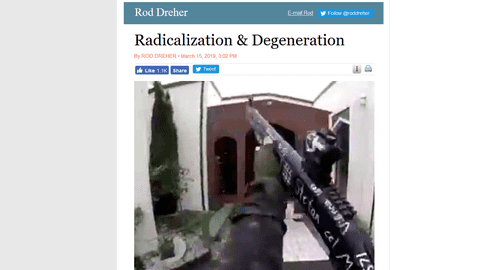 Earlier: Why No Stories About Whites Fearing “Backlash” After NZ Shooting? Because Of Cultural Marxist Narrative Control—And That’s Part Of The Problem

I usually react strongly against the idea that any of the repeated Muslim mass murders in the West is a “tragedy,”  as General George Casey notoriously described the Fort Hood shooting—they’re ATROCITIES, dammit. And I’m skeptical of Main Stream Media’s attempts to brand killings by whites as “terrorism”—it’s a usually just a ploy to call in draconian anti-terror statutes to suppress political dissent, as with the crazed iconoclasm directed at Confederate memorials that followed the (very minimally-connected) Dylann Roof shooting. However, the Christchurch NZ massacre is different. Although apparently the act of an individual,  it was terrorism, in the sense that the alleged perpetrator, Brenton Tarrant, consciously used the what Leftists used to extoll as “propaganda of the deed” to achieve a specific political goal. And it is a tragedy, in the sense that it was predictable and preventable, but no-one listened. The good news: massacres like this, and the Muslim atrocities that apparently provoked Tarrant, are still preventable—by ending mass Third World immigration. The bad news: Western elites just won’t do it. They prefer repressing the white host nations. But it won’t work.

In a peculiarly religious act of anathematization, Tarrant’s manifesto seems to have been largely scrubbed from the internet. This in itself shows how completely Cultural Marxist totalitarianism has displaced classical liberalism in Western elite ideology—none of this Brandeis-type nonsense about sunlight being the best disinfectant. Of course, VDARE.com will respect this taboo: we have enough problems with deplatforming as it is. But it’s ironic that the paradoxical effect of this censorship can only be to increase traffic to Andrew Anglin’s crypto-Nazi Daily Stormer website, where the both the manifesto and the shooting video are permanently archived.

Across the world, response to these atrocities has become boringly ritualized:

(2) everyone goes back to their agendas.

In the case of 9/11, this meant making the Middle East safe for Israel by invading Iraq, the exact equivalent of responding to Pearl Harbor by invading China; and continuing to Elect A New People in the U.S.—including, incredibly, importing more Muslims. In the case of Christchurch, it apparently means imposing gun control on a country where widespread gun ownership has long been combined with the commendably low murder rate characteristic of white societies.

Ironically, Brenton Tarrant anticipated this in his manifesto. He pointed out that he could have used many other methods including “vehicular attacks” (as for example in the much larger 2016 Muslim massacre in Nice, France—and, significantly, the 2017 Immigrant Mass Murder in Stockholm, Sweden, which claimed the life of 11-year old Ebba Akerlund, of whom Tarrant writes “the indignity of her violent demise and my inability to stop it broke through my own jaded cynicism like a sledgehammer”). 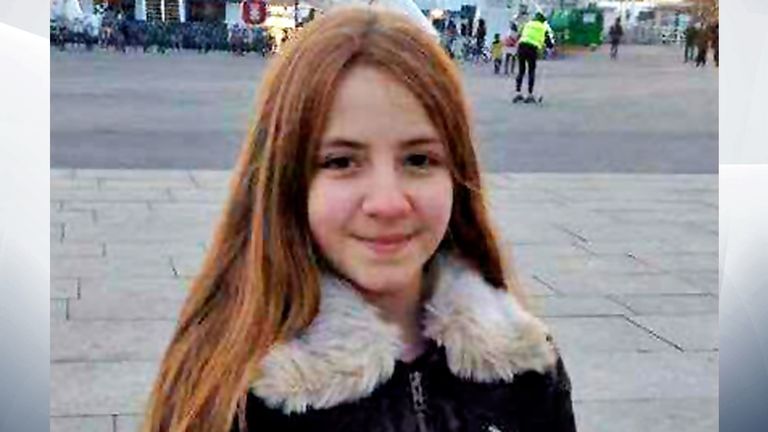 A school governor says there was "something special" about 11-year-old Ebba Akerland, one of four people killed in Stockholm.

The elite agenda also includes censorship:  A Mass Murder of, and for, the Internet, by Kevin Roose, New York Times, March 15, 2019.

“One of the sickest and most upsetting parts of this for me is that the killings, the actual terrorist attacks, are forms of propaganda for the statements,” said [Matthew] Feldman of the Center for Analysis of the Radical Right. “They draw attentions to their statements through their actions.”

“The coverage will be wall-to-wall today,” he said, “and tomorrow it will set someone else off.”

But it is not “coverage” but objective reality that will “set someone off” tomorrow.

According to the 2013 census, the number of New Zealanders who identify as Muslim was 46,149.

[Former president of the Federation of Islamic Associations of New Zealand Dr Anwar] Ghani said about 30 per cent of this country's Muslims were born here. Of the remaining 70 per cent who immigrated, most arrived in the past 20 years.

The Muslim population increased six-fold between 1991 and 2006

This immigration-fueled growth is extraordinary. It raise the question: what does the New Zealand government think it’s doing?

And of course this is nothing compared to Europe or North America. Tarrant titled his manifesto “The Great Replacement,” a concept developed by the French writer Renaud Camus and widely discussed in Europe. This has had the benefit of flushing out what might be called Replacement Denialists: New Zealand attack: How nonsensical white genocide conspiracy theory cited by alleged gunman is spreading poison around the world, by Lizzie Dearden, Independent, March 17, 2019. But, because of mass immigration, the Great Replacement is simply reality: RIP this Britain: With academic objectivity, Oxford Professor and population expert DAVID COLEMAN says white Britons could be in the minority by the 2060s - or sooner, by David Coleman, Daily Mail, May 27, 2016. It’s an unfortunate fact (for the Left) that “genocide” as defined by the United Nations doesn’t just mean extermination, but also displacement.

My old friend David Frum was recently fiercely attacked for suggesting, from his current perch in The Atlantic, that  If Liberals Won’t Enforce Borders, Fascists Will| We need to make hard decisions now about what will truly benefit current and future Americans. [April 2019]

But of course Frum is right. Indeed, Tarrant in his manifesto actually describes himself as a fascist, influenced by pre-war British Union of Fascists leader Sir Oswald Mosley.

(It's also worth mentioning that Tarrant specifically says his "belief in a democratic solution vanished" with the defeat of Marine Le Pen's Front National in France's 2017 election, very much the result of legalistic legerdemain. President John F. Kennedy famously said "Those who make peaceful revolution impossible will make violent revolution inevitable." But Kennedy, like Brandeis, has also been pushed aside by America's Emerging Totalitarian Left).

I haven’t bothered with the usual Politically Correct pieties in discussing the Christchurch massacre, partly because you never get credit for them. But for the record, I do second the PC bleatings of Rod Dreher—and also his substantive point:

One of the biggest lies we hear whenever there is a mass terror attack, such as the one against New Zealand’s Muslims, is that the killing was “senseless.” It’s not without reason when ISIS does it, and it’s not without reason when people like Brenton Tarrant, the alleged NZ shooter, do it. The acts are evil, but not senseless; there is a rationale for what they do….Everything Tarrant identifies as qualities of a disintegrating Western civilization is true. You may think that declining numbers of ethnic Europeans is a good thing, or something that has no particular moral meaning. But it really is happening…It is simply bizarre to think that all Europeans are going to acquiesce gently in the overwhelming of their nations by immigrants in this century.

But of course it never is. The Ruling Class absolutely, positively wants to demonize white men and their problems, and lump them in with mass murderers—as also with anyone (for example, Jared Taylor) who thinks seriously about what these tragedies mean.

Significantly, all of these killers acted alone. They appear to be genuine cases of the “leaderless resistance” contemplated by military theorists. It's very hard to stop them. And until the conditions that provoke them are redressed, they will keep coming.