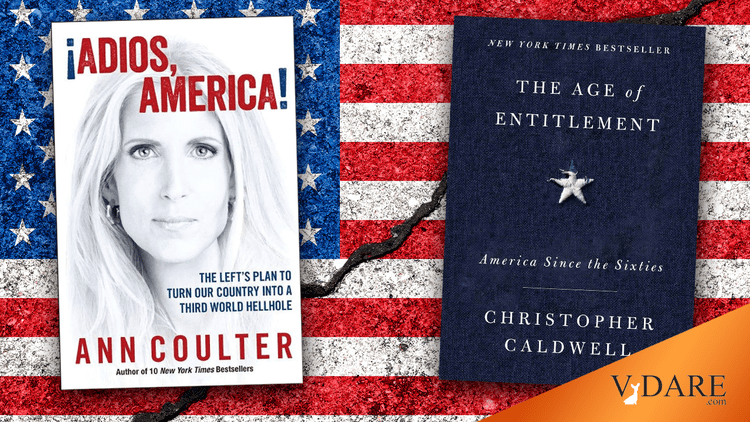 Recent disastrous decisions by our “conservative” U.S. Supreme Court shows that, if Ann Coulter’s Adios America! was the most important book of the 2016 election, Christopher Caldwell’s The Age of Entitlement is the most important book of the 2020 cycle. He argues that the new constitution effectively created by the misnamed Civil Rights Act has displaced the old Constitution that the Framers gave us. Now it appears the “conservative movement” is submitting to this Cultural Marxist revolution. There’s nothing left to “conserve.” Americans need to take a more proactive strategy to safeguard our liberties.

“Law is whatever is boldly asserted and plausibly maintained,” said Aaron Burr. It’s hard to believe SCOTUS made its two recent decisions in good faith. It seems far more likely that a majority in each case envisioned the outcome they wanted in advance and then reasoned backwards.

In the first decision, the Main Stream Media is reporting that the Supreme Court ruled 6-3 that the Civil Rights Act of 1964 protects homosexuals and transsexuals [Supreme Court Delivers Major Victory To LGBTQ Employees, by Nina Totenberg, NPR, June 15, 2020].

This doesn’t quite cover it. The decision, written by President Trump Supreme Court appointee Neil Gorsuch, admitted that those who wrote the Civil Rights Act “might not have anticipated their work would lead to this particular result.” Nonetheless, Gorsuch and the majority decided that “sex” did cover transgenders. “Only the written word is the law,” he thundered, “and all persons are entitled to its benefit.”

Yet “sex” has been redefined from a biological reality into a social construct dependent on a person’s feelings and self-determined “identity.” As we know from the constant lawsuits against Christian businesses by liberal activists, this simply opens the door for professional victims to seek out “discrimination” and file lawsuits.

A Washington Post hack smirked that the Christian conservatives “still wield an extraordinary degree of power” that “won’t last,” even as he simultaneously pretended that religious groups would be able to win exceptions so they wouldn’t be forced to betray their beliefs [Why the religious right is so freaked out by the Supreme Court’s LGBTQ ruling, by Paul Waldman, June 16, 2020]. However, if the Supreme Court can simply reinterpret the meaning of words based on current context, it means that prior decisions, legislation, and even the Bill of Rights can simply be handwaved away.

This is especially ominous at a time when powerful people make serious claims that property destruction is not violence [In Defense of Destroying Property, by R.H. Lossin, The Nation, June 10, 2020]. In contrast, they declare Politically Incorrect speech is violence [‘Words are violence’ is the slogan of tyranny, by David Harsanyi, New York Post, June 21, 2020]. While American cities are gripped by continuing anarchy, the State Department has actually released a report claiming, on the basis of a few isolated incidents, that “white supremacist terrorism” is a “serious challenge for the global community” [Country Reports on Terrorism 2019, U.S. Department of State, 2019].

It simply remains for speech that the powerful don’t like to be redefined “terrorism” and First Amendment protections will be removed. Nothing can be taken for granted. The very concept of law is swept away if words can just mean whatever Leftists want them to.

The rationale for this was utterly bizarre. Roberts wrote that the Administration needed to explore other options, such as allowing illegals to remain in the country while not allowing them to receive benefits. In his decision, Roberts built an elaborate imaginary maze that the Administration failed to travel through. The Acting Secretary of Homeland Security should have “considered a broader renewal period,” or “more accommodating termination dates,” or weighed the “reliance interests” of DACA recipients against “competing policy concerns” [Department of Homeland Security Et Al. v. Regents of the University of California Et. Al., October Term 2019, p. 26]. By not doing this, the Trump Administration violated the “Administrative Procedure Act” and thus could not revoke an Executive Order that the Court itself admitted is illegal.

This is anarcho-tyranny in its worst form. The Court simply invents a procedure that an Administration must follow to revoke a possibly illegal Executive Order and then faults the Executive Branch for not following it. It’s demanding the Administration anticipate the Court’s own thought exercises for hypothetical policies before it can make any decision. This essentially means our entire system of government is backwards, because now the Court is claiming that the policy process should start with the justices. The Court didn’t rule DACA was legal, it simply ruled that the Trump Administration’s method for undoing it was illegal.

Of course, as the Dissent notes, this means that every president has a motive to assert new and possibly illegal Executive Orders, because future presidents will be tied down in legislation.

Justice Sonia Sotomayor sided with the majority, but dissented in part. Her remarkably crude argument: The President’s DACA repeal wasn’t just illegal because it didn’t jump through enough procedural hoops, but because it violated the “Equal Protection” clause. Her rationale: She didn’t like President Trump’s campaign speeches.

Taken together, “the words of the President” help to “create the strong perception” that the rescission decision was “contaminated by impermissible discriminatory animus.” 585 U. S., at ___ (opinion of SOTOMAYOR, J.) (slip op., at 13). This perception provides respondents with grounds to litigate their equal protection claims further.

She also complains about the “disproportionate impact” DACA repeal would have on Latinos.

Obviously, Justice Sotomayor is in the minority of justices in this case. However, her dissent shares the reasoning of the Supreme Court’s majority decision on transgenders. She claims the original intent of the law and the language of the law do not matter. Instead, what matters is how justices feel about what the law says and the people who wrote it. If they don’t like those people, either the old white males who wrote the Civil Rights Act of 1964 or the President Trump who proposed DACA repeal, well, they can just change the meaning of the law or throw it out entirely.

Note that there’s no reason that this rationale can’t be applied to the Constitution as a whole—written as it was by dead white males, some of whom owned slaves.

This is precisely what Christopher Caldwell argues in his book:

As enacted in 1964, civil rights had meant a partial repeal of the First Amendment. It had withdrawn the right to freedom of association long implicit in the freedom of assembly. But now, when authorities and judges hit difficulties or resistance in advancing civil rights, they were tempted to insist on ever-larger derogations of First Amendment rights, perhaps believing themselves to be working in the ‘spirit’ of civil rights.

Caldwell ends his book by implicitly suggesting that Republicans,

loyal to the pre-1964 constitution, could not acknowledge (or even see) that the only way back to the free country of their ideals was through the repeal of civil rights laws.

Caldwell admits would be is “terrible” because of the social tensions that will occur.

But he implicitly suggests that President Trump’s election heralded a possible reaction. His last sentences recount Ann Coulter’s June 2015 famous appearance on Bill Maher’s show, when she was greeted with laughter for predicting Donald Trump would win the GOP nomination and the presidency—one of the greatest calls in American political history.

But has President Trump truly repealed any of the post-1964 “new constitution?” He has not. He picked Justice Gorsuch who helped set the terrible precedent with this transgender decision. Despite bold tweets, Trump has not cracked down on Leftist violence nor the Democrat officials who enable it. He has not displaced the MSM elites who shape opinion, instead protecting Big Tech companies that suppress the guerilla Dissident Right influencers who memed him to victory in 2016 rather than breaking them up. “Cancel culture” is stronger than ever, and everyone from George Washington to Ulysses S. Grant to Theodore Roosevelt is a target.

What is the solution? One would be to use the “Civil Rights” constitution against itself. President Trump and the GOP could push for making “ideology” a protected category under federal civil rights law, thus protecting their supporters from being fired from online mobs and Journofa. (This is already arguably the case in California law under the Unruh Act—see Some Strange Consequences of Public Accommodations Laws, by David Bernstein, Volokh Conspiracy, May 25, 2010.

Of course, this isn’t likely to happen unless Conservatism Inc. gets out of the way. After all, Conservatism Inc.’s entire history is one of purges of its own truth-tellers and of failed efforts at “respectability.”

Still, if President Trump and grassroots Republicans can summon the will and direction, they can overcome Conservatism Inc. just as they did in 2016.

However, if they can’t, then American nationalists really have no place left in their own nation.

At that point, it is time to start looking for a way out through secession. That could simply redividing existing states. But in the furthest extreme, it could mean exiting altogether from this terrible post-America that increasingly resembles an open-air prison and an insane asylum.

The irony is that, while the Confederate statues are coming down, their ideas suddenly seem more relevant than ever.