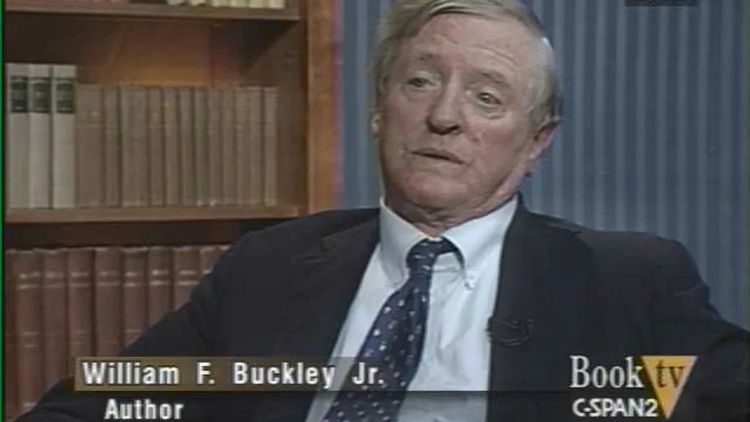 Buckley Fesses Up (Finally): National Review Has Caved On Immigration!

"It seems to me that the idea traditionally defended of endeavoring to maintain existing ethnic balances simply doesn't work any more."

Congratulations to American Renaissance editor Jared Taylor for getting Bill Buckley to admit, after a series of unworthy evasions, that National Review has caved on immigration—has "stopped stridently claiming opposition to immigration as a conservative cause," as Wall Street Journal Robert L. Bartley gloated recently (July 3, 2000). It's been pretty obvious, of course, that the line I pioneered with my June 22, 1992 "Time to Rethink Immigration?" NR cover story had become an embarrassment (although for all I know I may still be on the masthead). Buckley, however, has repeatedly denied that he has changed that line, in personal conversation and in letters to chagrined readers.

Taylor nailed this particular jellyfish to the wall after publishing, in his September issue just out, what is likely to become an important document in American political history: a magisterial review by James Lubinskas of National Review's long retreat on racial issues.  (See The Decline of National Review) Reading it is an astonishing reminder of how frank, free and honest the American debate about race was only yesterday—in the 1950s and 1960s. National Review, and Buckley, explicitly defended segregation and even apartheid in the interests of (yes!) the "white community" and "civilized standards."

Today, of course, George P. Bush can tell a cheering Hispanic crowd that his Mexican mother "told me to defend our race"—but his white father can offer no such instructions.   And, as Lubinskas acidly points out, NR can publish a cover story by "a senior editor with an Indian surname" attempting to read Patrick J. Buchanan out of the "conservative" movement on the grounds that "Buchananism is a form of identity politics for white people."

Hoping to get Buckley to explain NR's retreat, Taylor politely asked for an interview. His amusing account of the ensuing runaround is on the American Renaissance website.

He was told to fax questions, and did so. Then his request was refused, repeatedly. And then Buckley shamelessly used Taylor's faxes in his column on immigration, pegged to the Republican convention.

This column was vintage late Buckley, that is to say incomprehensible. A conclave of Freepers was debating its meaning for days. I was inclined (unusually) to give the old beggar the benefit of doubt—after all, he did blunder into the issue of public policy's imminent racial transformation of the U.S., something The Wall Street Journal Edit Page carefully never mentions. I presumed he was still worried about it in some inchoate sort of way.

I was wrong. In the letter Buckley finally wrote after Taylor reproached him for his behavior, he makes it clear that he has caved.

(The letter contains a second sentence: "A defense against the sort of situation portrayed by [Jean] Raspail [author of Camp of the Saints, the prescient futuristic novel about France's inundation by illegal immigration from India—not Africa, as Buckley says in his column] would seem to inhere in immigration laws, particularly in the idea of unrestricted immigration." A signed copy of Alien Nation to anyone who can figure that out!)

In fact, of course, the U.S. has an absolute right to stop itself from becoming Latin America or Haiti. And anyway, immigration is about much more than ethnic balance. What about skill levels? What about overall numbers (if low enough, all other problems go away)? By letting himself be trumped on race, Buckley has conceded the whole game. Which is why immigration enthusiasts play the race card so relentlessly.

In a future post, I'll tell the story of why and how this happened.

American Renaissance, which might be described as focusing on the implications of The Bell Curve, is probably the most daring site we link to. Jared Taylor is the sort of writer about whom editors get delegations darkly warning of his vague extreme links. (This is actually what happened after he appeared once in National Review).

VDARE declines to be trumped by the race card. We will, as someone once said, be heard. But anticipating the inevitable ad hominem smears, we will make five points:

1. Truth is an absolute defense. What American Renaissance reports about NR's retreat on race and immigration is completely factual, whatever the motive or justification.

2. American Renaissance, however radical its views, is undeniably rational, judicious and respectable in tone.

3. Jared Taylor cares about truth. As an establishment journalist, I monitored this very carefully when we quoted him in a 1993 Forbes story assessing the cost of affirmative action  and when I reviewed his book Paved With Good Intentions

(Carroll & Graf) for NR in 1993. There was actually a mistake in that book—there were a few score white-on-black rapes in the U.S. annually, instead of just a few. Taylor was mortified. And his mistaken source, an academic study, was unimpeachable.

4. Taylor is a gentleman. I had to break his arm to get him to release this private letter from Buckley—although Buckley himself (who is notorious for this sort of thing) had already used Taylor's private letter in a column.

5. Taylor is, according to Buckley, "a white separatist of sorts." That is, at the time when National Review was founded, he would have been called an American patriot.

American Renaissance's home page is http://www.amren.com/. You can write to National Review at letters@nationalreview.com.